David Chieppo, Anne-Lise Coste, Dieter Hall – things are getting better all the time… 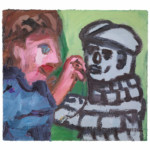 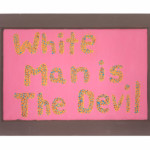 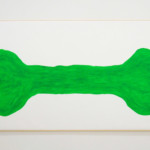 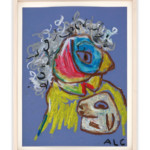 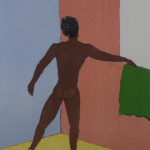 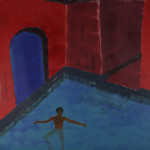 Helmhaus Zürich challenges the public in an exhibition showcasing three emotionally driven artists, who bombard us with political/personal, unconscious/deliberate, playful/tender and conspicuously unmistakable messages. It is no wonder that “things are getting better all the time”, given the unpredictable mix of gravity and irony that marks contemporary life.

What is on view at Helmhaus Zürich is not to be confounded with simple naïveté. On the contrary: the path to mature naïveté is long. It is not a straight path. It is a path of return. A great deal of thinking is required in order to abandon thinking. Anne-Lise Coste, David Chieppo and Dieter Hall have liberated themselves from the pressures and expectations that come from outside – and also from the expectations from within, which are perhaps the most difficult to escape. The freedom that ensues is not always easy to bear – there is nothing to cling to: no safety nets, no comforting routines. Anyone audacious enough to confront society with unpopular immediacy is in danger of being sidelined. Anyone courageous enough to invite the unconscious must be prepared to face the insecurity of uncharted territory. Such revelations, such unpopular risks are now on display. And they send a message: all that we cheerfully and fearfully suppress is part and parcel of society, of contemporary life; it is a mistake to treat outsiders like stray dogs, to denigrate, ostracize and exclude them. On the contrary: we can neither ignore nor escape them. We must face them squarely. At a far remove from deadening consumerism, opinion-shaping and pseudo-liberalism, an exhibition of this kind can show us where the essentials, the freedom of thought (and action!) lie buried. Stray dogs know where that is.

When the designer of the exhibition Laurent Goei – also an artist with a turbulent biography – asked the artist Anne-Lise Coste if she would mind having her first name written without a hyphen on the exhibition poster because it looks better, she replied, “I couldn’t care less.” Name another artist who would be indifferent to having his/her name misspelled on a world format poster! When David Chieppo moved into a small studio in the heart of Switzerland that could not be more typically Swiss, I asked him how the art scene would react. He replied, “I don’t care what the art scene thinks about me moving here.” When Dieter Hall was asked how he manages to unite all that is quintessentially bourgeois with all that is demonstratively homosexual, how he can tolerate the tension and why he provokes it, he replied, “The heart is incredibly big.” By which he meant that there is a lot more room than we think in a life, in a human being.

Yes, the heart is incredibly big for those who are as big-hearted as these artists. They are open-minded; they bring together what society separates. They test what society will accept. The boundaries must always be questioned: that is the job of art, assuming that art realizes it is also a living organism, like society. Who else would tackle the work of thinking?

Thinking is also a product of people simply doing what they feel like doing without thinking, without worrying about potential loss. The result mirrors our surroundings, precisely because it is so unthinking, having emerged so “inconsiderately”. On one of Dieter Hall’s collages, we read “Tun tut gut” (Doing feels good), and elsewhere “Warten bringt nichts” (No point in waiting). Both slogans are symptomatic of this exhibition, which encourages action: in a hesitant, anxious country.

This exhibition could, therefore, be salubrious, because it is the product of people who have turned their backs on reluctance. All three have turbulent biographies. And now look ahead, by “doing”. “I know nothing,” says Anne-Lise Coste – deceptively. Knowing that she is extremely well read, as are the other two artists. She has perhaps set herself the most difficult task of all, in deliberately discarding her knowledge. In order to recover the “primal gesture”, the “primal painting”. “We are monkeys,” she says. In her case, a “monkey” well-versed in the history of art: there are, for instance, repeated glimpses of Matisse or of a “primal Matisse”. Coste wants to make room for sensuality and the senses in a rational, language-centred “brain world”. To this end, she paints colourful, oversized bones on a blinding white ground. Crude and self-forgotten, digging up. She crayons distorted self-portraits, scaring herself because they are so alien and yet so close. The sky is full of airplanes – and bombs. And then the still lifes: like Morandi’s hallucinations of the presence of things – but under shock and not vibrant like his.

Our uncertain, turbulent world, both personally and politically, surfaces in the oeuvre of David Chieppo. He paints “Saints and Lovers”. Writes the “white man” off as the “devil”. Implores “four Russian friends”. Even if he would rather be tramp than trump, he wilfully tramples across the borders of political correctness. Breaks taboos, thereby marching into new mental territory. Chieppo is a superb, academically trained draftsman, who creates precisely crafted atmospheres in the fewest of strokes. Despite his training, he has not lost his unruly unpredictability; he still gives free rein to his emotions. The political and the personal intersect in his work. The hare, caught in a trap in a new clay relief, is a political and a personal hare. Animals and saints, politicians and soldiers are the protagonists in Chieppo’s universe. That universe is ours as well, except that we have never had the guts to put together such unabashed thoughts with so little restraint.

Dieter Hall, slightly older than Chieppo and Coste, has always been a master at “putting thoughts together”, as quintessentially demonstrated by his new collages, soon to be available in a book published by Wolfsberg Verlag, Zurich: “A Fine Romance, My Friend, This Is”. Political correctness means nothing to him either. He ignores the rules with playful deliberation. So much tension crowds his mental universe that it threatens to explode. But that is exactly what makes the medium so appealing, and art, too, we might add: Where else is the inexcusable excused? Which leads to the next question: Why is it inexcusable in the first place? Hall’s new prints and paintings on this test bench of art are equally challenging when seen in the context of a Moroccan hammam, where we sweat out and wash off everything we thought we could depend on. Where the towels are hung up to dry, bearing mute witness to the purification process. In clear demonstration of a clear statement: They are innocent! And in the reinvention of peasant paintings from Appenzell: with landscapes whose trails trace fragile paths to a realm of senses and yearnings.

Just as Dieter Hall is at once a romanticist and an astute social critic, so too do David Chieppo and Anne-Lise Coste embody (putative?) opposites: tenderness and trenchancy, humour and political awareness, playfulness and unmistakable gravity, the unconscious and the accessible mind – these all collide with unprecedented intensity. Something that can only be achieved by artists prepared to take substantial risks. The existentialist tone in one of Dieter Hall’s collages is no accident: Was vom Leben übrig bleibt – Spielabrechnung (What remains of life – final score).

The title of the exhibition, “things are getting better all the time…”, is, of course, ironic provocation in an age of rampant uncertainty. It is also self-irony, a trait endemic to all three artists. And yet, there may be a hint of hope in the Beatles’ lyrics. Be it only the inspiration visitors may take from the immediacy, the emotionality and the decisiveness of the exhibition.

The biographies of the three artists are marked by pronounced highs and lows. Anne-Lise Coste (b. 1973) now lives in the countryside of Nîmes in southern France after many years spent in Zurich and New York. She is represented by Galerie Lullin + Ferrari in Zurich. David Chieppo (b. 1973) comes from the United States, studied in Philadelphia and New York and has been living in Zurich since 1998. He is represented by Galerie Brigitte Weiss in Zurich. Dieter Hall (b. 1955), once a student of art history and literature, returned to Zurich in 2011, having lived in New York for almost thirty years. From 6 May, additional paintings of him will be showcased at Galerie Werner Bommer in Zurich.

As always, the exhibition is framed by a number of events. Psychoanalyst and curator of the visual archives at the C.G. Jung Institute in Küsnacht, Ruth Ammann, will comment on the thesis that artists should not undergo excessive therapy. J&J (Jessica Huber and James Leadbitter) will speak with Daniel Morgenthaler about their (art) project, “The Art of a Culture of Hope” – reinforcing the title of the exhibition. The curator of the exhibition, Simon Maurer, and the artists will talk about the (in)compatibility of naïveté and reflection, as part of the series “Welcome to the Problem Zone”.