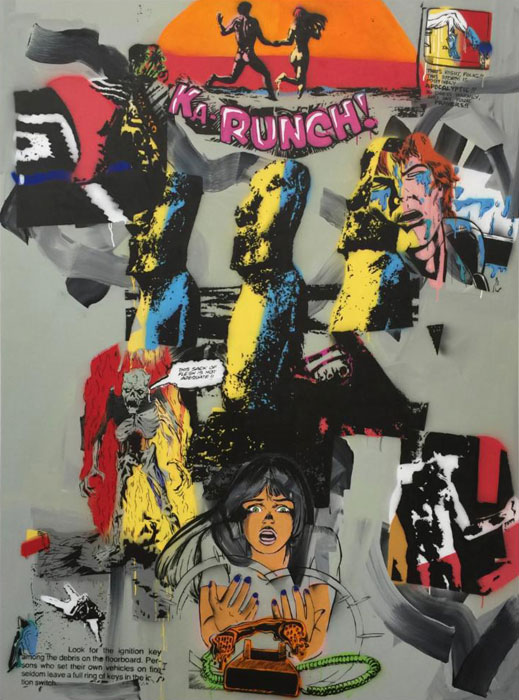 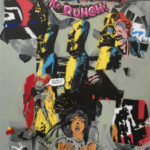 History is destined to repeat itself, though our ability to record and process events is struggling to keep pace with the increasingly rapid rate at which that repetition occurs. Drawing on an archive of pulp and subculture scraps, “Basement Psychedelia” captures a contemporary sense of dread; the anticipation, fear, and anxiety of the present moment as defined by an endless cycle of an American imperative defined by male entitlement, insatiable indulgence, and immediate gratification.

“Basement Psychedelia” presents a new body of contemporary history paintings animated by a frenzied energy and a newly colorful palette. Ratcliff has steadily expanded the formal range of his painting practice, and the new pictures evince a loose virtuosity with a more direct presence of the artist’s hand and increasingly painterly effects. Gestural brushwork and fluid paint introduce new material and surface qualities while underlining the exigent suspended motion of Ratcliff’s signature stencil spray-painting.

The translation of stencil and spray paint mediates the formal qualities of Ratcliff’s appropriated imagery in vastly different ways, though the selected illustrations and photographs both employ stark shadow and contrast. Compromised form and dimensionality corrupt the legibility of the sourced photographs, blending representation and abstraction and obscuring boundaries between bodies, shadows, and shapes. The illustrations more precisely transcribe image and process, with a quality of line that discloses the crisp surgery of the stencil and dusty overspray of their painting. Mediated traces of origin such as the source material’s panel and page borders orchestrate an interplay of planar flatness and spatiality and breadth.

Culled from a vast array of sources, Ratcliff’s found material gathers an associative collection of evidence and information, the disjointed clues from a crime-scene read more immediately by your gut than your head. The subjects of history painting are traditionally communicated through narrative depiction, whereas Ratcliff’s works suture together fragmentary and open-ended aesthetic impressions untethered from a time continuum to convey a prevailing social and political mood. The paintings are populated by imagery not so much from the annals of history as a shallow grave of endless consumption; for allegorical subjects and fixtures of history painting such as the heroic male nude, Ratcliff’s casting call to outdated flesh mags and He-Man comics yields sleazy and vain personifications.

Following the flawed logic that there can never be too much of a good thing, the comics and pornographic images share an id-driven excess evident in the hyperbole of muscle, pose, and expression. The appropriated comic text is dramatic even in punctuation and formatting, the titles and onomatopoeic text overblown and campy, while dialogue is often dry and wooden in tone. A pathological undercurrent runs through these sources, relating outsider or voyeuristic perspectives and compulsions symptomatic of a media-fueled suspicion and distrust. The paintings locate the intersection of external and internal realities, the point of contact for the subconscious forces, fears, and desires that drive society and feed the image world.

The visual texture of the artist’s native Los Angeles is the heart of production for amplified fantasy, a delirium inseparable from the real of the city. “Untitled (The Calling)”, 2018, documents a landscape where every day is a highlight reel for commodities of privacy and publicity to be exploited; “Follow them and get it all on film,” one text fragment reads, while another solemnly intones, “If you walk out of here you’re dead meat. The fat cats or the artists. All the same shit. They all want that magic.” The visual counterpart to the preening muscle-milk characters are the steps down to the Ganges at Varanasi, contrasting flesh and stone, the fleeting and lasting.

The curdled humor of “Basement Psychedelia” manifests the anxiety of news-cycle obsession and a skin-crawling state of apprehension, maintaining thematic and visual tension mixed with moments of relief. A reminder that respite is distinct from resolution, the tension lingers throughout, never releasing entirely. As the title hints, drugs and psychedelia reveal a desire for transcendence, though the flip side of this impulse is the base instinct for escape. Within the hallucinatory confines of the present, psychedelia is both setting and escape mechanism, not transcending events so much as allowing for spectatorship from the nosebleed seats, with the action reduced to shape and color, the sound to noise and echo.

David Ratcliff lives and works in Los Angeles, and has exhibited nationally and internationally, with solo shows at Tomio Koyama, Tokyo, Rodolphe Janssen, Brussels, and Maureen Paley, London. His work has been featured in group exhibitions at MoMA PS1, The Turin Triennial, and Art Center College of Design. His work is part of the public collections of the Los Angeles County Museum of Art, the Jumex Collection, and the Smithsonian Museum of American Art.

This is the artist’s sixth solo show at Team.