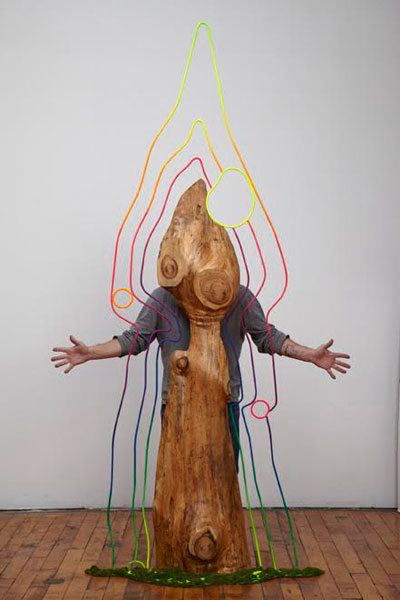 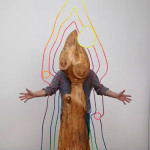 Jeff Bailey Gallery is pleased to present David Shaw, “Dear Everything,”, an exhibition of new sculpture.

Natural materials are mixed with the manufactured: wood, glass, steel and rope are combined with holographic laminate, paint and fake moss. The organic brushes against the machine made and the distinction between the two breaks down.

It is in this state of entropy that Shaw finds release, if not radiance. The largest work in the exhibition, “First Piece”, features a low modular structure. Its compartmentalized shape suggests domestic use. Contained within are logs whose edges are covered in holographic laminate, reflecting the color spectrum. Tree branches seem to grow from its sides, suspending glass droplets. It functions both as a repository and cosmological object.

A vertical cross section of a sycamore tree, “Brink” stands at approximately eight feet tall. A field of moss lies at its base, or could it be mountains? The color spectrum radiates outward, evoking continued, if unnatural growth. Seemingly in a threshold state, it is either born from or dissolving into nothing (possibly both).

In “Hang-up (I Cry Both Ways)”, a sycamore branch holds two glass droplets and two balls of rope. It dangles helpless in its release, in a state of ecstasy or tearfully spent.

Throughout the exhibition Shaw strikes a balance both formally and conceptually: there is a play between image and objective reality, between naming something and experiencing it, between holding on and letting go.

This is David Shaw’s twenty-fourth solo exhibition and his first with the gallery. He had seven solo exhibitions with Feature Inc., the most recent being in 2013. He is a recipient of the Peter S. Reed Foundation Award (2015) and the Nancy Graves Foundation Award for Visual Artists (2008). His work is in the collections of the Museum of Modern Art, NY and the Artphilein Foundation in Vaduz, Liechtenstein. Shaw received his BA in Fine Arts from Colgate University in 1987. He lives and works in Brooklyn, New York.