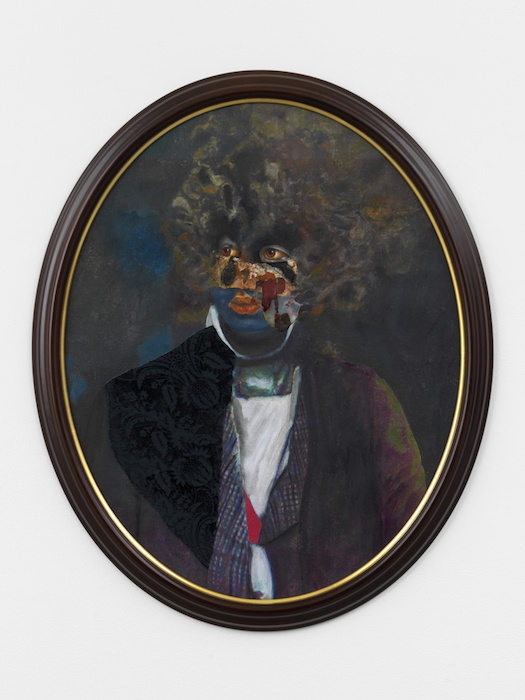 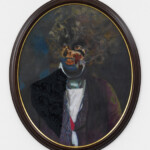 For his second solo exhibition in New York, David Shrobe took inspiration from a lecture given by Frederick Douglass in Boston’s Tremont Temple in 1861. In the address Douglass wrote: “Poets, prophets, and reformers are all picture-makers — and this ability is the secret of their power and of their achievements. They see what ought to be by the reflection of what is …” Picture-Makers essentially demonstrate the artist’s ambition to constitute all three persona — poet, prophet, and reformer — in the figure of a temporal and spatial traveler. Adding complexity to this aspiration he has painted several different characters who are incarnations of this hybrid figure. Shrobe seeks to explain his practice by saying, “It’s about how to make an image from a variety of things and different ways of working that speak to the story” This is to say that he means to make a complex image that operates in several registers at the same time. You perceive the different strata of meaning if you give the paintings (and the sometimes hidden figures featured in them) their due attention. Some of these registers are historical, political, personal, imaginary, and sensual.

You might notice that these travelers do not arrive barren; they bring with them abundant cargo. In the historical vein, Shrobe makes references to daguerreotypes, imitating their framing, soft focus, and muddy backgrounds. At the same time, to frame his subjects, he uses furniture parts (typically tables and chairs) found in the neighborhood near his studio in Harlem. Thus, he combines one of the earliest technologies invented to make pictures of people with the very remnants of the lived lives of people who were not always welcomed into the studios to sit for these (now) classic portraits. This critical historical perspective bleeds into a political one, as Shrobe makes Black and Brown bodies assert their place in the stories that have at times omitted them. So the “Known Soldier” (2019) smuggles all this significance in under his military jacket, while holding his bayoneted rifle and the viewer’s gaze. He is a prophet, poet, and reformer in the guise of fighter.

Shrobe combines the historical, political, and personal in the work that alluded to what is said to be the only portrait of Frederick Douglass with one of his children, his daughter Annie in the painting “Center-stage” (2019). The piece echoes the gentle regard Shrobe gives his own three-year-old daughter who serves as a kind of model for the piece, and Douglass’s conviction — which spurred him to become the most photographed man of the 19th century — that the lives of people of color must be made visible to be made valid to the viewing audience unprepared to reflexively bestow this generosity on them.

There is the use of the imaginary in Shrobe’s giving his figures their own interior lives by portraying them as pensive thinkers. This nuanced manipulation of the figure’s gaze can be seen in “Decelerate” (2019) and “Detach” (2019). As the artist says “Internal reflection is where it all starts, before the action of physically doing anything.” Thus, these figures sometimes return your gaze, others refuse it. They have their own agendas and concerns.

And there is a sensual register evident in the ways that fabric drapes across the portraits and wooden frames bracket them, to give them an elegance that unites the formal elements in Shrobe’s pastiched blends of the figure, its historical resonances, and its current significance. To make a picture ultimately for Shrobe is to make something that has its own agency, has power, is able to persuade the viewer to perceive what ought to be by showing us what is.

David Shrobe (b.1974, New York, NY) lives and works in New York. He holds an MFA and a BFA in painting from Hunter College. His work was recently included in “PUNCH” at Jeffrey Deitch Gallery, Los Angeles, CA; Uptown, the Wallach Art Gallery Triennial at the Lenfest Center of the Arts, New York, NY; and in “Bronx Calling: the Fourth AIM Biennial”, at the Bronx Museum. Shrobe’s work is part of the public collections of The Brooklyn Museum, NY; The Block Museum, Evanston, IL; Jordan Schnitzer Museum of Art at the University of Oregon, Eugene, OR; and NSU Art Museum, Fort Lauderdale, FL. This is his third solo exhibition with the gallery.