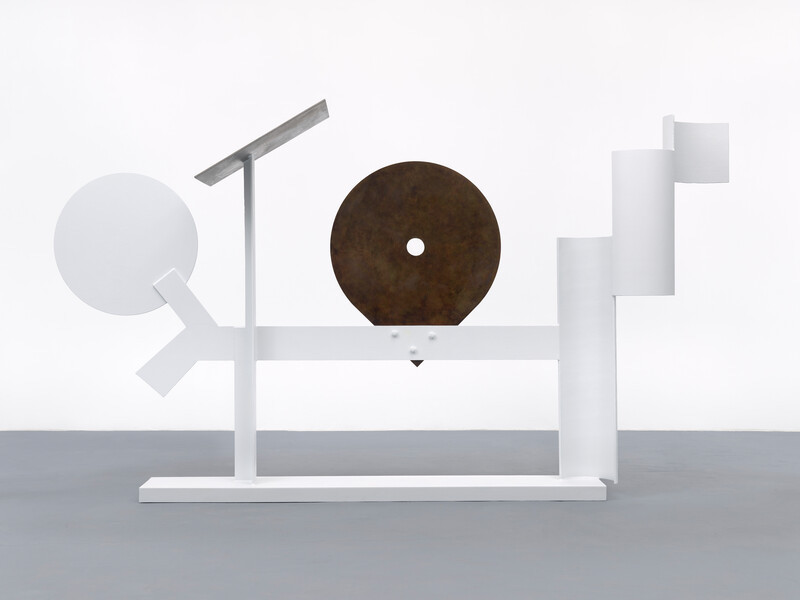 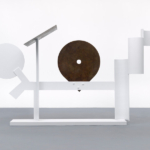 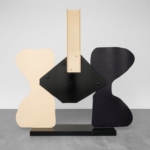 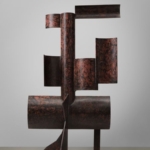 One of the foremost artists of the 20th Century and the sculptor most closely associated with the abstract expressionist movement, David Smith (1906–1965) is celebrated for his use of industrial materials and processes and the integration of open space into sculpture. ‘David Smith. Four Sculptures’ will be held in Hauser & Wirth’s glass-fronted exhibition space on Bahnhofstrasse 1, Zurich. The exhibition will showcase four extraordinary, painted sculptures that represent major sculpture groups Smith made in the early 1960s.

Throughout his career, Smith referred to himself as both a painter and a sculptor, working in both mediums simultaneously. Citing the unification of painting and sculpture in ancient Egyptian and Greek art, Smith applied painting concepts to his sculpture and vice versa. ‘I’ve always made painted sculpture,’ Smith asserted in 1962, ‘not one year that I’ve worked have I failed to do this.’ By the early 1960s, he had arrived at a new phase of creativity: he made nearly one-third of his entire sculptural output in the last five years of his life while working on a monumental scale. The large, painted works in ‘David Smith. Four Sculptures’ are outstanding examples of the culmination of Smith’s long exploration of color and form.

‘Zig I’ (1961) is a part of Smith’s Zig series that comprises seven large-scale, vertical works, each numbered by the artist. The series’ name was an ‘affectionate term,’ according to Smith, that derived from ‘ziggurat’ — a stepped pyramid found in ancient Mesopotamia. Each of the Zigs features inventive arrangements of planes and rounded forms that yield surprising spatial relationships as a viewer walks around the sculpture. ‘Zig I’ is made from cut sections of steel tubes that ascend in a playful dance along a vertical axis. The surface of this work is activated by an application of feathery, black brushstrokes over a russet ground, harnessing the gestural vigour seen in the work of Smith’s fellow abstract expressionists.

By contrast, the yellow sculpture ‘Untitled’ (1964) is characterised by angularity and a monochromatic surface. It has been suggested that this sculpture could possibly be ‘Zig VI’ — a number that is missing from the Zig series. While ‘Untitled’ does bear certain formal similarities with the Zigs, it retains a distinct individuality in its nearly-minimalist, matter-of-fact construction and chromatic uniformity. In this sculpture, Smith stacked I-beams of various sizes and balanced them on four small, found wheels, a feature that connects it to three other wheeled sculptures from the Zig series, all of which are in museum collections. It is especially related to ‘Zig VII’ (1963), in the collection of The Museum of Modern Art, New York which is painted with a large swath of bright yellow and sits on four comparatively sized wheels.

In 1962, Smith was invited to make two sculptures for an exhibition associated with the Festival of Two Worlds in Spoleto, Italy. Working with a crew of local metalworkers in an abandoned steel factory in the nearby town of Voltri, Smith produced a total of twenty-seven sculptures within a month. The experience would have a profound impact on Smith’s work. After returning to Bolton Landing, he sustained the energy he demonstrated in Voltri and made, over a six-week period, three large sculptures that define his Primo Piano series. The title is Italian for ‘first floor’ — the floor above the ground floor — where, Smith explained, ‘most of the action takes place.’ In ‘Primo Piano II’ (1962), for example, two vertical elements elevate a central, horizontal beam, above which a dynamic interplay of different shapes and metals unfolds across a span over thirteen feet long. In a natural setting, this large-scale sculpture commands a strong visual presence, as a graphic contrast to the landscape. While the other two works in this series are entirely white, ‘Primo Piano II’ incorporates elements of unpainted bronze and stainless steel that introduce compelling variations within the work itself.

Smith described ‘Gondola II’ (1964) as his latest painted sculpture in a lecture delivered at Bennington College shortly before his untimely death in May 1965. The chromatic surface of ‘Gondola II’ is elegantly articulated, with a black, diamond-shaped plane topped by a cream-colored stanchion and flanked by two cloud-like forms, one in cream and the other a deep purple—tonal contrasts that counterbalance the general symmetry of the work. The title is a reference to the Italian name for the cart used in factories, such as Smith’s workspace in Voltri, to transport large, heavy materials. Smith would incorporate the term ‘gondola’ into the titles of two other large, planar sculptures, now in museum collections. He made the first ‘Gondola’ in 1961 as a response, in sculpture, to Robert Motherwell’s renowned series of paintings, the Elegies to the Spanish Republic. A dialogue, through art, with other artists was part of Smith’s ‘workflow’ and inspiration.

‘David Smith. Four Sculptures’ offers a rare opportunity to consider these distinct sculptures in relation to one another, and to explore the many ways Smith mined history and his own prolific career to continue expanding the definition of sculpture.