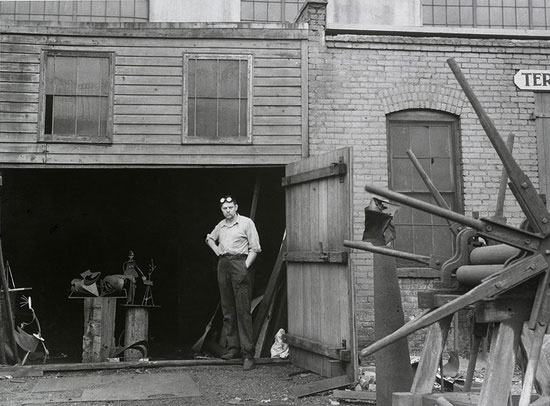 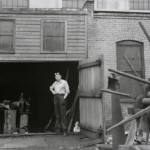 Hauser & Wirth is pleased to present its first New York solo exhibition of work by David Smith (1906 – 1965). Offering a fresh, in-depth examination of his varied career, ‘Origins & Innovations’ brings together the artist’s paintings, drawings, photographs, and sculptures of the 1930s alongside examples of his later work, for which he is best known. Instead of isolating distinctions between media or periods in Smith’s oeuvre, this exhibition elucidates the connections between his earliest inspirations and his life-long investigation of their potential.

David Smith transformed sculpture by radically changing the site of its production from the atelier and foundry to the industrial factory. In making his own work, rather than relying on assistants, Smith elevated sculpture to the status of painting – infusing it with the same directness and evidence of the artist’s hand. Along with the materials for which Smith is better known, such as welded steel, the exhibition includes less familiar aspects of his practice: such as brightly painted reliefs made from animal bones, surreal figures assembled from commercial bronze sand casts of hand-carved wood forms, and small abstracted animal forms modeled in clay that exude a primal sense of process.

Richly inventive, Smith built his aesthetic cumulatively and refused to restrict his practice to a single style, method, medium, or subject. His exploration and embrace of a diverse array of sources, transformed by his tremendous creative energy and a powerful belief in his own identity as a unifying force, enabled him to forge a new language for sculpture and to create multiple distinct bodies of work in a broad range of media. By displaying Smith’s oeuvre as a dynamically heterogeneous whole, rather than as a segmented linear narrative, and including major museum loans, as well as works that have never been exhibited before, this exhibition reveals surprising juxtapositions of materials and scale that shed new light on Smith’s lasting artistic legacy.

The exhibition highlights Smith’s radical approach to line, space, and mass, as well as his merging of forms from nature and industry. For example, his early use of line and sense of motion can be seen in a wide variety of works, including a delicate ink drawing done in the Virgin Islands, and a photograph printed from a handmade negative, both from the early 1930s; the looping steel sculpture, ‘Swung Forms,’ (1937); the openly sinuous construction of rough iron fragments of farm machinery, ‘Agricola VIII,’ (1952); an untitled 1960 drawing of accumulated black egg ink gestures; and the glistening stainless steel construction, ‘Three Circles Related,’ (1958 – 59), which transforms industrial scraps into geometric shapes with lyrical, figurative grace.

Smith acknowledged the creative continuity that connects humanity across millennia. He embraced the entirety of his artistic lineage, from prehistoric cave painting, to art of tribal communities bound by myth, to that which is codified within the histories of Eastern and Western art-historical culture. An ardent autodidact, Smith consistently acted on the belief that unity and meaning are created only through an open and inclusive celebration of all that is human. By connecting with the world around him, he successfully synthesized a specific yet expansive visual language that pushed him, as well as those who encounter his work, to truly look afresh.

A forthcoming book from Hauser & Wirth Publishers will document ‘David Smith. Origins & Innovations’ through extensive illustrations and texts that expand upon the exhibition’s themes, including a newly commissioned essay by Gavin Delahunty, the Hoffman Family Senior Curator of Contemporary Art at the Dallas Museum of Art.