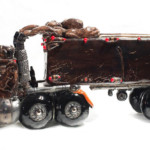 Allan Stone Projects is pleased to present “Dennis Clive: Ceramic Transport”. Ranging from the playful to the apocalyptic, Clive utilizes his mastery of clay to both satirize and celebrate symbols of American transport in nine elaborate sculptures from the Allan Stone Collection.

Marvels at a distance, the true extent of Clive’s abilities lie in the close-up view, when the scrutiny paid to details like undercarriages, windshield reflections, license plates and hand-painted decals, are most apparent. Yet the convincing realism of detail does not overshadow the inherent fragility of the clay, nor Clive’s ambitious use of it. With a style that pays homage to Robert Arneson and California Funk Art, Clive has carved out his own niche.

Dennis Clive was born in Niagara Falls, New York in 1950. He studied at the State University of New York at Brockport where he received his BS in 1972 and later at the University of Cincinnati, College of Design, Art and Architecture where he received his MFA in 1975. Clive first exhibited at Allan Stone Gallery in 1976, where he has been the subject of six solo shows and numerous group exhibitions. His work has been featured at the Los Angeles Museum of Contemporary Art, the Detroit Institute of Art, the Berkeley Art Center, the Contemporary Arts Center of Cincinnati and Rochester’s Memorial Art Gallery. Clive’s work has been profiled in Artnews and The New Yorker. He was the subject of a New York Times interview in 2002.

The artist lives and works north of the San Francisco Bay, in Sebastapol, California.