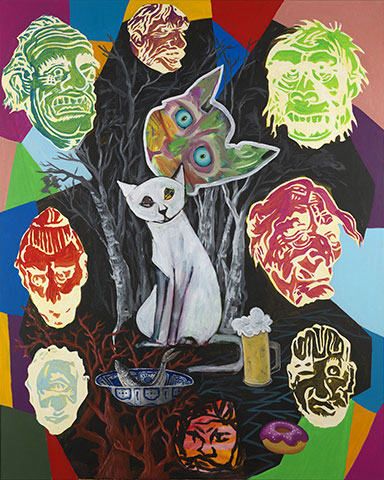 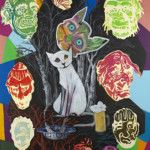 Hauser & Wirth Somerset is pleased to announce a new solo exhibition by Djordje Ozbolt, following the artist’s residency with the gallery in 2016, at The Maltings Studios in Bruton. ‘Brave New World’ introduces an entirely new body of work conceived during Ozbolt’s residency, and the show’s title takes its name from the 1932 science fiction classic by Aldous Huxley. It is also a reminder of the renowned line uttered by Miranda in Shakespeare’s ‘The Tempest”, ‘O brave new world, that has such people in’t!’ – with both references rousing feelings of nostalgia and wonderment.

In Ozbolt’s ‘Brave New World’, the visitor is sent on a journey in which they encounter a variety of landscapes populated by myriad characters and rituals, passing from one zone to the next as though on a quest for divine inspiration. Ozbolt himself is an avid traveller, whose work irreverently borrows from a plethora of cultures, traditions, and curiosities, inviting viewers to look afresh at each reference. This exhibition reflects Ozbolt’s ongoing interest in combining canonical art historical motifs with cartoon imagery and kitsch, using a wide range of techniques including painting on canvas, casting in resin, sourcing ready-mades from the Internet and sculpting with remnants from the studio.

Ozbolt is known for his playful subversion of history, memory, and contemporary culture, which begins the moment one arrives at Hauser & Wirth Somerset. Visitors are greeted by the figure of a leaping gnome, propelling himself from the roof at the entrance, with a mischievous smile on his face. The gnome thrusts his fist forward in the stance of a superhero – injecting a sense of humour from the outset. Despite the gnome’s determination to soar, this comic apparition takes inspiration from Yves Klein’s famous staged photograph, ‘Leap into the Void’, in which the artist was captured apparently diving to his death. Just as the jumper in the photograph, the gnome chooses to welcome his inevitable fate with a calm and serene disposition. From across the farmyard, a trail of brightly painted garden gnomes parade in single-file from the Granary, one of the oldest structures on the site, straight up to the glass doors of the Threshing Barn. The gnomes were produced in Ozbolt’s home country, Serbia, and the work touches on notions of mass-migration and displacement.

On entering the Threshing Barn gallery, the viewer encounters a way-finding sign positioned in the centre of the room, reminiscent of directional signs such as those found in rural Somerset. Ozbolt’s hand-painted signpost invites the viewer into his imagination, directing them to thoughts and ideas, as well as to places of personal significance. These physical locations and psychological states of mind are inscribed on the arrows of the signpost, which point to works displayed on the gallery walls, depicting scenes that are related to their noted location. The mileage inscribed on the wooden arrows (such as ‘Disneyland Florida, 4259 miles’) alludes to their precise geographical location. Creating a striking contrast to the dizzying totem of signs, the trail of gnomes that were first encountered outdoors continue marching through the gallery space and across the floor, paying no heed to the signpost.

Following the exuberance of the Threshing Barn, the Workshop gallery presents a more orderly display. In contrast to the first space, which showed directions and possibilities, this room features destinations, landscapes and environments, some of which can be described as hybrids of drawing and painting. In these works, the central canvas displays the dominant vista, while the drawn border alludes to details within it, serving as a prelude for the immersive environment to come.

The sculpture ‘Tree of Life’ (2016) is fabricated and sculpted from assembled found articles and is an example of the appeal Ozbolt finds in using non-traditional materials. Working intuitively, Ozbolt gathered readily available items such as wooden off-cuts and foam during his residency, so that the sculpture and the ideas behind it developed within the process of making, revealing the role that stream of consciousness and free association play in his work. ‘Tree of Life’ has a counterpart in the painting ‘Lucy’s Hood’ (2016) where it features as part of a psychedelic landscape.

Moving through to the Pigsty gallery, Ozbolt transports us into a dramatic painted jungle landscape replete with dark, dense foliage. The walls and ceilings are entirely transformed through an ambitious and immersive wall painting created on site. In the centre of the room sits a table on which a collection of over 70 cast resin figures stand alert – each one rendered in its own monochromatic colour. The original figures from which they were cast – some wooden, others plastic – stem from a wide range of contexts, such as German folklore, African tribal art and Oceanic artefacts. The multi-cultural chorus, positioned looking outwards to face the ‘Brave New World’ painted on the walls, represents a microcosm of the world’s diversity, united in their search for meaning.

Beyond the sensory explosion of the Pigsty gallery, the final room of the show includes two sculptures created using the same process of assembling as ‘Tree of Life’. Entitled ‘OMG I’ (2016) and ‘OMG II’ (2016) these technicolour apparitions are decorated with ornaments and jewellery, their titles and adornments suggestive of a guru-like status. They stand and observe what has come before, possibly able to provide some answers to the congregation in the previous room. The work is a fitting coda for an exhibition of an artist whose signature is the comic amalgamation of high and low artistic conventions.

Running concurrently with ‘Brave New World’, Djordje Ozbolt will be exhibiting a series of newly commissioned works at The Holburne Museum in Bath titled ‘The Grand Detour’ from 17 November 2016 to 5 March 2017.