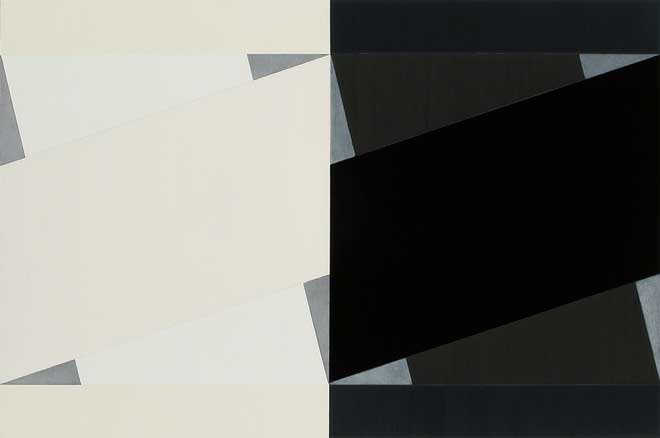 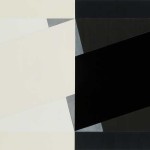 Jeff Bailey Gallery is pleased to present an exhibition of new paintings by Don Voisine.

Can a painting be minimal and maximal at the same time? Don Voisine’s paintings are. They are subtle and bold. Opaque and translucent. Simple and complex. Micro and macro. Matte and shiny. Flat and deep.

It is these shifts between alternate states that impart Voisine’s work with a sense of drama, of playfulness, of sculptural heft.

Fields of matte and shiny black seem to flip back and forth, or up and down. Some resemble the shape of an X while others suggest crosses, screens or portals. This tension is balanced by bands of another color at the top and bottom or the sides of each painting, which creates a mirroring effect.

Some of Voisine’s most recent paintings are devoid of black. White, cream and grey comprise “Glide”, a tilted cross shape that seems to move from left to right. In “Maitre D’”, Voisine uses variations of both white and black to join two cross-like shapes into one painting. As in all of Voisine’s work, symmetry and repetition yield to balance and clarity.

This is Don Voisine’s first solo exhibition with the gallery. His work was included in the gallery’s group exhibition “Simplest Means” in 2010. He has had many solo exhibitions throughout the country, including those at McKenzie Fine Art, New York and Gregory Lind Gallery, San Francisco. This summer he will have a solo exhibition at… Voisine’s work is in the collections of the Corcoran Gallery of Art, Washington, D.C; Museum of Modern Art and National Academy Museum, New York; Peabody Essex Museum, Salem, MA; and Portland Museum of Art, Portland, ME. Since 1997 Voisine has been a member, and for many years president, of American Abstract Artists, an artist-run organization founded in 1936. In 2010 he was elected to lifetime membership in the National Academy of Design. Voisine lives and works in Brooklyn, NY.