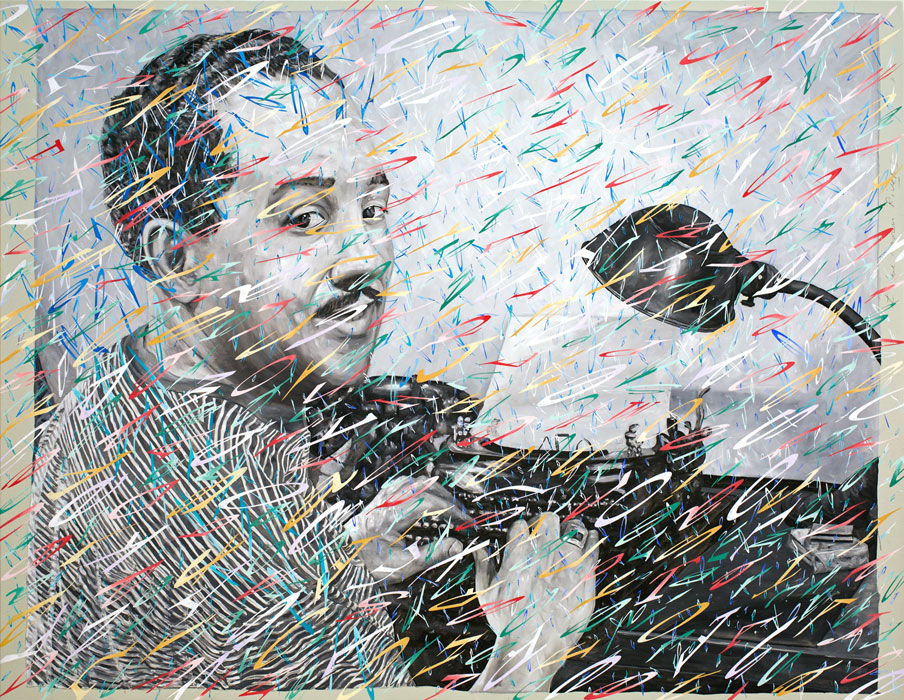 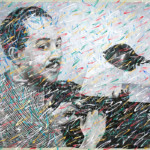 Doug Argue is a consummate painter capable of prodigious works that straddle realism and abstraction. In “Genesis,” one of his three large paintings recently commissioned for the lobby of the new World Trade Center in New York City, Argue’s painting is veiled with sweeping swathes of crisply painted letters. It is as though we are placed “in the beginning,” witnessing a cosmic explosion. Argue freed the letters from the Book of Genesis making them available for the next generation to create the new meanings needed to move forward.

Argue comments, “there are many different histories in the world, and we often see things in the current moment, yet have no idea what lies beneath. One language is always turning into another, one generation is always rising and another falling, there is no still moment. I am trying to express this flux – this constant shifting of one thing over another, like a veil over the moment itself.”

In the new works for this exhibit, Argue looks to iconic historical paintings, such as the Warhol soup can as starting points to his broader investigation of language and its written system. Argue’s arresting interpretation of such recognizable images work in tandem with the fluxing letters to create a new visual paradigm. Single letters are at times legible, clustered they become abstract. They produce a sense of immediacy and movement; their energetic rush is like snow in the wind or the frenetic dance of bees en masse. Yet, they ground the overall composition with gravitas.

These letters once held stories but here accessibility flutters out. The viewer will recognize the Demoiselles of Picasso, or Mary Cassatt’s unconditional love between mother and child – but Argue intentionally painted them using images culled from the Internet for their inherent inaccuracies. Furthermore, in some paintings Argue rewrites histories and invents completely new compositions; for example a “Mondrian” that never was.

“I Have Known Rivers” sees text and image dance in visual harmony – we feel the lyrical rhythm of Langston Hughes’ jazz poetry fly off his typewriter. In “The Triumph of Time,” Argue translates a still-life by 16th century Flemish painter Frans Snyders where stark letters stream in from the top left as an illuminating light-source. Fernand Léger’s use of bold graphic lines, forms and clear colors is summarized in the cheekily titled “Boogie Woogie.”

In his work Argue questions what is defined as realistic and abstract. Adumbrated as his works are, perhaps the tension is largely between the conceptual and the visual. In technique, his is a dichotomy of precision and painterly gesture. In content, his paintings are cerebral with interweaving narratives and layers of meaning. Argue expresses the flux of life, suggesting the passage of time, and how the past informs the present.

Doug Argue (b. 1962, Minnesota, United States) has been the subject of numerous museum exhibitions including the Walker Art Center, Wiseman Museum, and the Minneapolis Institute of Arts, Minneapolis, MN. His works are in the collections of numerous major public, private, and corporate collections including the Weisman Art Museum, where his large early work of a commercial chicken barn is on view. Argue has received multiple awards, including a Pollock-Krasner Foundation grant (1995) and the Prix de Rome (1997). The non-profit Save Venice Inc. presented “Scattered Rhymes”, an exhibition of four monumental paintings by Argue held in conjunction with the 2015 Venice Biennale. Argue is represented by Marc Straus in New York.