Doug Hall – Song of Ourselves (After Walt Whitman) 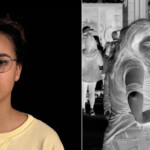 Doug Hall: Still from “Song of Ourselves (After Walt Whitman)”, 2018, Two channel video installation with sound

Rena Bransten Gallery is pleased to present “Song of Ourselves (After Walt Whitman)”, a two‐channel site‐specific video installation by Doug Hall, designed in collaboration with the architectural team modem (Kathryn Moll and Nicholas de Monchaux). The installation situates a video of high school students reciting Whitman’s text with a projection that washes across the gallery walls of slow motion, black and white video of people moving along urban sidewalks and gathering on beaches and in city parks.

Following the 2016 election Hall felt that “something ugly and malevolent slithered out of the dark recesses of the American psyche. Suddenly hateful rhetoric and intolerant action – postures and behaviors naively thought long ago vanquished or at least repressed – emerged from the highest offices of the land and contaminated broad segments of the populace. In the shadow of this misanthropy it is easy to lose sight of the alternative, democratic ideals that this country was founded on, ideals that, while not fully realized, were passionately expressed in the writings of Henry David Thoreau, Ralph Waldo Emerson, William James, and most clearly and beautifully by Walt Whitman in “Song of Myself” from his epic poem “Leaves of Grass”.”

Doug Hall’s new work “Song of Ourselves (After Walt Whitman)” proposes that a humanist tradition can provide an antidote to the venom seeping into the American conscience. Made in collaboration with high school drama students from The Urban School of San Francisco, this work brings forth the positive spirit that resides within Whitman’s words. By assembling a group of diverse students reading selections from the poem, the ‘I’ of the poem becomes not the voice of the single, male poet (Walt Whitman) but the voice of us all, summoning the poem’s original, inclusive intent.