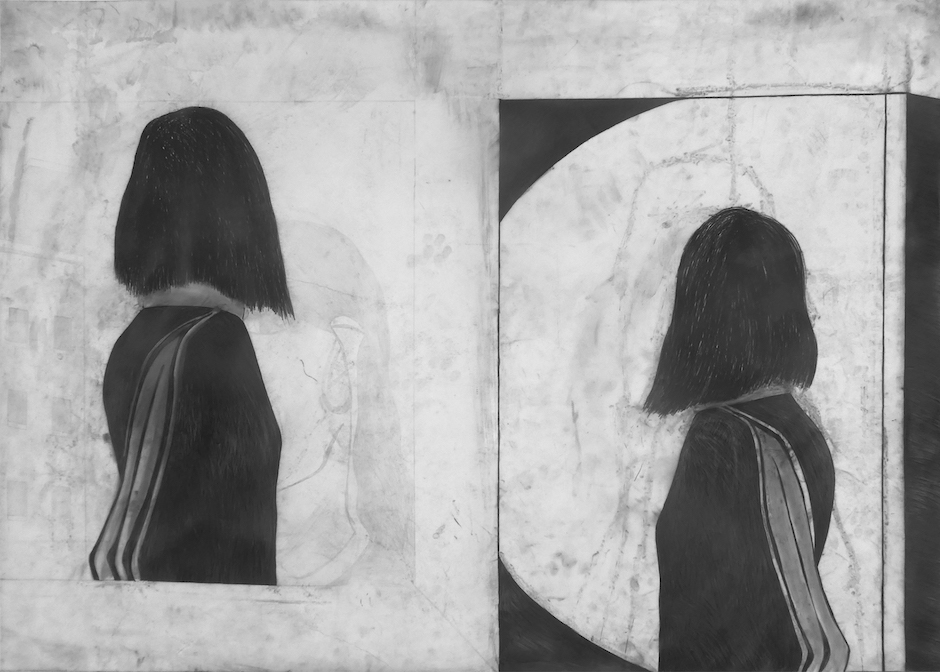 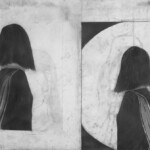 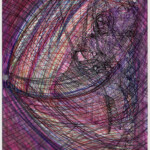 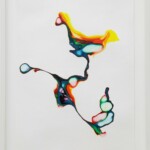 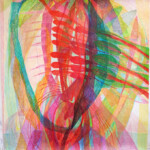 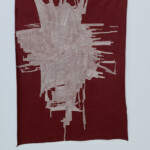 Dream and reality – an odd couple. Dreams become true – and reality feels like a dream. Or maybe a nightmare? Strangely, the title of this exhibition at Helmhaus conjures only good dreams. The five Swiss artists, all of them working in the medium of drawing, wander between dream and reality. As though there were a ladder between them that we could climb up and down effortlessly. Climbing? Falling. Flying.

Dream and reality – hope and despair. This is what the works of the five female artists featured in this exhibition are all about. These are existential works. Works that resonate deeply, wailing and yearning, crying and laughing. Works that are playful and joyful, reflective and contemplative. Works inspired by dreams. Or by the reality that seems like a dream.

What these five artists have in common is drawing. The lines take sweeping and intricate paths, converging in space, forming circles that become pipelines. What these women share as artists is their contiguity of mind and body, emotion and intellect, impulsiveness and thoughtfulness. And above all the honesty with which they bare their innermost selves. Even the things that jar: the uncertainties, the wounds. All displayed with a remarkable candour that bears witness to immense strength.

With the exception of Sylvette Burckhardt, whose works were first presented in 2006 by Manfred Betschart at his Nordstrasse 152 gallery under the title “Ein Gesamtkunstwerk” (he also managed the estate of the artist after her death), the works in this Helmhaus exhibition are almost entirely unknown or have never before been exhibited.

Sylvette Burckhardt (1960-2005) used to spend her nights at the legendary Spider Galaxy club in Zurich between 1997 and 2005, creating small-format drawings in felt pen. She produced more than 4000 of them before her untimely death put an end to the series. Inspired by techno beats in the dark, by the movements of the dancers, by her own inner visions and by drugs, she created a gesamtkunstwerk whose richness railed against the void. The density of an interconnecting web of lines that was more than just a supporting structure. A clarity that revealed itself in complexity. The artist gave form, space, rhythm, colour and sound to this constant buzz. She gave it a face and a body. While the overwhelming totality of her oeuvre might be described as manic-obsessive, each individual drawing merely encapsulates the self-constructed reality of her life.

What lies behind the astonishingly intuitive work of Agnès Wyler? The Zurich-based artist (*1961), originally from French-speaking Switzerland, who studied in the USA, delves into the world of dreams, as well as into the real world of the present day – and sees right through them both, reflecting them in her own life and work. Her works are mobile, literally on rollers, in ever-changing constellations – even aided by the visitors to the exhibition who, themselves, contribute to the multifaceted dream of reality: perched high on a ladder, accompanied by live piano music. Who am I? Who is the other? How do we differ? What connects us? These are the invisible lines that permeate her works, linking the similarities and the dissimilarities, the equalities and the inequalities … appearance and disappearance, corporeality and reflection, are all captured in a finely calibrated balance: dedicated to the transience of life, to the levity of love and to the unfathomability of death.

No less daring is the work of Zurich artist Frederike Schweizer (*1961), who has been living in Vienna for many years. Her work is daring in the sense that she truly goes out on a limb – pushing her own desires and anxieties to breaking point. And sometimes they do indeed break. When that happens, she is caught by a work that supports her, embraces her, gives her strength and energy. In endless and painstakingly detailed work, she embroiders entire suns, moons, branches and faces onto huge swathes of fabric which she then hangs on the wall. These, too, are mutable, light-sensitive, shadow-casting, self-concealing, self- revelatory, nestling, confrontational. The sheen of the yarn, the thousands of pinpricks that pierce the carrier of the artwork – an art in itself – and the permeation of the fabric, all reverberate metaphorically, giving an insight into the inner life of the artist herself and into the feelings that she transforms into messages. These are messages that strike a chord emotionally, physically and existentially.

The large-format colour pencil drawings by Zurich-based artist Sabine Schlatter (*1977) instantly strike the viewer as incredibly emotional. They seem like journeys to an inner world of unknown entities, opening up new spaces, new abysms, and a realm of comforting tenderness. There is no black in Schlatter’s oeuvre. The graphite of the pencil rarely appears. Instead, we find red, green, yellow and blue in multiple variations, violet, orange, brown … the compositional syntax of a freely constructed organic whole, the invention of everything from volumes to spaces that do not exist in this form. And yet, they do exist – in art. Schlatter sees her art as social cartography, as documentation, as a way of dealing with all that happens within and between living organisms. Not necessarily people: animals can sometimes be even more socially aware than humans. Therein lies the ambiguity of the emotional aspect in Schlatter’s work. Her fundamental approach is thoroughly – even extremely – emotional. Yet she channels such perceptions in a way that positions, arranges and shapes the emotions. The end result is a kind of archive.

Basel-based artist Franziska Furter (*1972) has previously described her works as visualised thoughts and exhibited perceptions. She has even written a thesis on uncertainty and indeterminacy. Uncertainty and indeterminacy as qualities? Her works are neither uncertain nor indeterminate. But she does not shy away from charting the path towards certainty and determinacy in her works: injury, shame and over-sensitivity are all part and parcel of her compositions and constructions, into which she injects life’s accidents and defeats as simply a matter of course. As markers on the path of an existence that need not be perfect, but which is nonetheless perfect in all its needs, fears and worries. For this exhibition, Furter has built a dreamscape, a drawing in space, with black pipes and colourful stays; a blend of industrial structure, playground, gym and ape house. She also presents new, marbled drawings whose delicate, organic ramifications intertwining both leadership and chance are of a beauty beyond description.

The programme of events accompanying the exhibition centres around issues relating to dream and reality. Experts invited to discuss these issues at our regular 5 o’clock Theses round include Remo Clematide on club culture, and Anja Derungs on gender equality. Social psychiatrists and psychologists pitch in too in the Welcome to the Problem Zone series. And the public is encouraged to participate actively, whether in the installation by Agnès Wyler, in dialogue with the speakers, in workshops for children or in the dream workshop where we tell each other about our dreams. Finally, the artists themselves will also take part in a panel discussion.