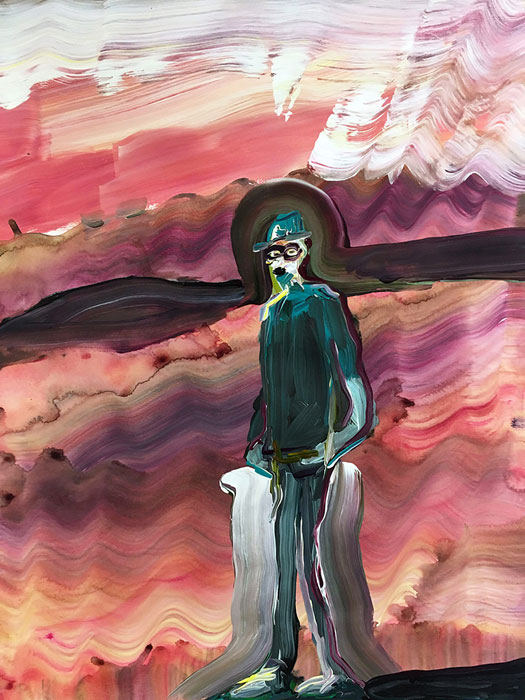 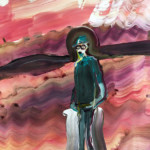 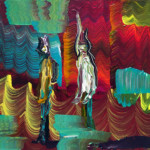 Luis De Jesus Los Angeles is very pleased to announce “Edith Beaucage: Sequencer-Spectrum-Reverb” the artist’s debut solo exhibition at the Gallery, to be presented in Gallery 2.

Scene: A techno music festival, surrounded by pulsing music and flashing strobe lights. Piper is trying to figure out who the guy running by in front of her is and suddenly realizes it’s Dax, from Berlin. He’s the producer of the show and he’s with that girl from Iceland, Svava. Why is he hanging out with her?

Transposing the idea of surround sound to the visual realm, Beaucage’s new paintings introduce us to a music production crew: American, British, and German electronic musicians and producers, along with ravers, party goers, and vap smokers. The exhibition consists of portraits on paper-head and shoulders shots and figures in landscapes. Are these presumed impostors, pseudo portraits or counterfeit eccentrics?

Beaucage’s loosely painted characters straddle representation and abstraction and oscillate between sincerity and parody. Specks, drips and drops of paint animate hoodies, long coats, eyes, hair and moustaches. Large expressive brushstrokes aroused by carbon black and phtalo turquoise energize the atmosphere. Although the work appears fun and lighthearted it has a foothold in critical approach and philosophy. The characters function as shorthand for a range of philosophical concepts that undergird her strategies: “being with” (Heidegger’s mitsein), “presence” and “trace” (Derrida), and “empathy” (Titchener’s Einfuhlung). They are quite congenial and approachable – if they where real; they’re “ultrasocial” (Haidt) and totally free.

Beaucage notes that these theories are alive or active when a person is trying to figure out what they are looking at, as when the viewer fabricates stories about the characters and finds the characters to be simpatico, they (you, the viewer) empathize and make up meaning from abstraction. “That is where these theories brake down into a process-‘trace’, making the image; ‘presence’, a sense of a person being the character… then the viewer discovers a ‘being with’, the viewer is with the character and some characters are in groups, therefore the viewer projects himself into that group in ’empathy’. The whole exhibition becomes a social space, a scene that you look at and that you can put yourself in.” In this respect, Sequencer-Spectrum-Reverb explores the concept of relationship as the waveform through different degrees of definition of abstraction and figuration.