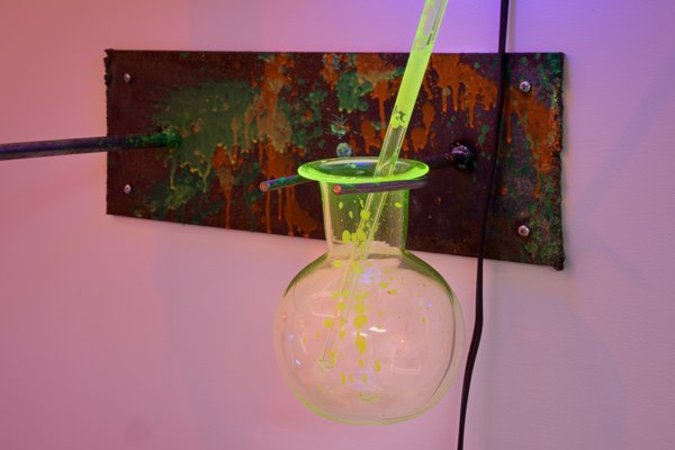 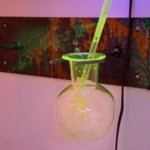 Team (bungalow) is pleased to announce a show by American artist Elias Hansen.

At Team, Elias Hansen will present a series of brand-new sculptures, created with the domestic space of the bungalow in mind. These assemblage works, which employ the likes of wooden shelving, hand-blown glass, electrical fixtures and found objects, are at once slipshod and extraordinarily meticulous, blurring our perception of accidental and orchestrated visual harmonies. Resembling the tools of an amateur chemist – perhaps the contents of a meth lab or moonshine distillery – these artworks are dense with metaphors of the alchemical nature of artistic creation.

The show’s centerpiece is a large, spidery chandelier, from which hang a mismatched assortment of beakers and bulbs, some of which emit colorful light. Several smaller works consist of pairs of elegant blown glass objects, set into roughhewn wooden fixtures. With this show, Hansen exhibits a fascination with modes of display and the marriage of disparate materials: the delicate pipettes, flasks and beakers and their rugged driftwood armatures are given equal visual priority.

Another body of work consists of so-called “fountains” – elaborately jerry-rigged contraptions featuring buckets, hoses and light fixtures, which pour and recycle supplies of water. The simultaneous appearances of functionality and futility represent a central theme in Hansens’ oeuvre; the artist seeks to confound our dichotomous conceptions of decorative and utilitarian objects. The sculpture becomes a site of erasure, removing the lines of necessity and luxury, amateur and professional creativity.

Elias Hansen has been the subject of solo exhibitions both stateside and abroad.