Elijah Burgher – Queen of the Forest 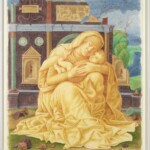 P·P·O·W is pleased to announce “Queen of the Forest”, Elijah Burgher’s first solo exhibition with the gallery. Using painting and drawing, Burgher works at the crossroads of representation and language, figuration and abstraction, and the real and imagined. Inspired by the literary and visual culture of the early 20th century occult revival and the reconstructed paganism of the 1960s, Burgher’s “Queen of the Forest” synthesizes a variety of magical and artistic philosophies regarding language, mythology, and desire to generate his highly personalized mystical iconography.

With a series of new, large-scale drawings, Burgher returns to in-depth figuration after five years cultivating a remarkably intimate code of sigils, emblems, and abstraction. Drawing from mythology, ancient history, the occult, and ritual magick, Burgher describes “Queen of the Forest” as being made “under the sign of Cybele.” Cut from equally scaled rolls of watercolor paper, the drawings emphasize a freer mark-making and represent fragmentary notes for a temple dedicated to the ancient archetypal dyad of the Mother Goddess and Son-Lover. Influenced by Robert Graves’ “The White Goddess”, Burgher’s “Queen of the Forest” examines the bond between this buried pagan relationship, specifically the Mountain Goddess Cybele and her son and lover Attis, and its ties to sacred calendars and the cycles of nature. Often pictured wearing a mural crown and riding a chariot drawn by two lions, Cybele, also known as the Magna Mater or Great Mother, reifies nature in all its fecundity, sexuality, wonder, and violence. Accompanying this mythos is Cybele’s son Attis, an agrarian deity in his own right who was ritually sacrificed in the spring by being hung from a pine tree and castrated, his severed genitals serving to fertilize the earth.

Dedicating the exhibition to Cybele, Burgher depicts the Goddess multiple times throughout “Queen of the Forest”, exposing how Christianity absorbed and recoded pagan beliefs. In “The Green Child”, 2021, Burgher recasts the figures in Sandro Botticelli’s Virgin and “Child with the Infant St. John the Baptist”, c. 1490, as Cybele, Attis, and the satyr Marsyas. In another pair of drawings, Burgher reinterprets the exultant military procession of Andrea Mantegna’s “The Triumphs of Caesar”, 1484–1492, depicting Cybele’s bust being wheeled into Rome by Julius Caesar’s forces and then back out into the woods by a jubilant parade of satyrs and nymphs. Recontextualizing this mythic couple of Lover and Beloved, Burgher furthers his exploration into the personal and cultural dynamics of desire, love, renewal, and subcultural formation.

In addition to this latest series of drawings, “Queen of the Forest” will also include Burgher’s large-scale abstract paintings on drop cloth canvases and works on paper featuring his unique lexicon of sigils. Both decidedly ritualized and extremely physical, Burgher creates a ceremonial circle by placing the canvases on the floor of his studio before painting atop them. With these works, Burgher endeavors to capture how a body’s feelings, reactions, and desires can be transmitted to an inanimate object in a specific moment in time. As Burgher explains, these works function “as both portable temples – spaces for conducting rituals – and artifacts of the rituals,” also acting as “soft architecture” that divides the gallery and guides the viewer through the ‘forest’ of this exhibition. Bringing together these bodies of work, Queen of the Forest unveils a personal, art historical, and fantastical symbology through which Burgher grapples with daily human experience.

Elijah Burgher (b. 1978) lives and works in Berlin. He received an MFA from the School of the Art Institute, Chicago and a BA from Sarah Lawrence College in Bronxville, New York. His work was featured in “Scrivere Disegnando: When Language Seeks Its Other” at Centre d’Art Contemporain Genève, Geneva, Switzerland, 2020; “Drawn Together Again”, FLAG Art Foundation, New York, NY, 2019; “For Opacity: Elijah Burgher, Toyin Ojih Odutola, and Nathaniel Mary Quinn” at the Drawing Center, 2018; “Elijah Burgher: Four Paintings”, LAXART, Los Angeles, CA, 2018; the Whitney Biennial, Whitney Museum of American Art, New York, NY, 2014; “Burning Down the House”, the Gwangju Biennale, Gwangju, Republic of Korea, 2014; and “The Temptation of AA Bronson”, Witte de With Center for Contemporary Art, Rotterdam, Holland, 2013, among others. He has completed residencies at the Skowhegan School of Painting and Sculpture and the Fire Island Artist Residency. His work has been reviewed in The New York Times, Art in America, Art Review and Artforum, among others.