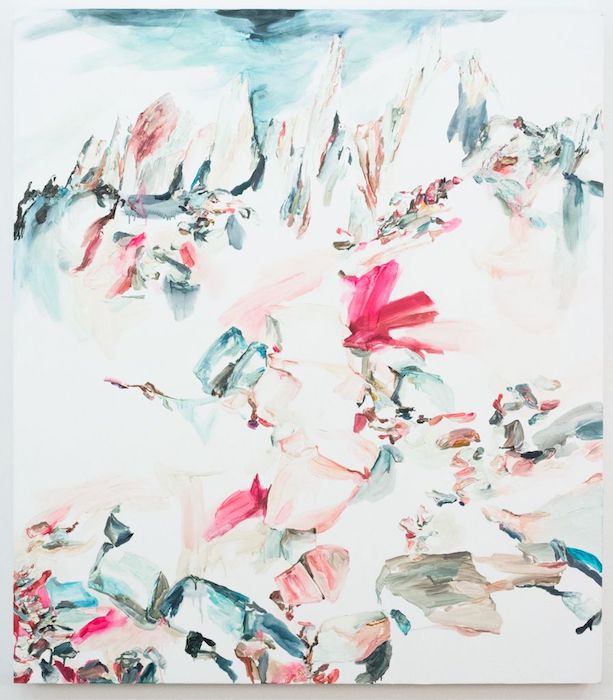 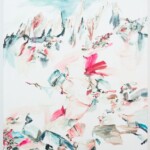 Johns’work draws inspiration from the beauty and severity of the Western landscape. Her most recent paintings focus on Kings Canyon in the Sierra Nevada mountains, where the artist spends her summers backpacking. Johns sees a certain connection between the immediacy of experiencing a painting and the immediacy of experiencing nature through the solitude and physicality of backpacking, and she seeks to interpret such experience rather than attempt to reproduce exact imagery.

Using a painterly touch both graceful and forceful, Johns navigates expanses of white canvas with meandering passages of thick paint. The openness of the white ground suggests vastness and invites the viewer to fill in the blanks, a kind of collaborative visual thought. Johns deliberately picks out areas of the landscape to highlight, often focusing on immediate objects in her depth of field, while at other times seeking to describe a larger panorama or atmosphere. Influenced by Japanese landscape paintings, Johns is interested in the transcendent and sublime beauty found in the natural world and the different ways a  scene can be organized to generate narrative.

The scale of these works references the physicality and monumentality of the places Johns depicts, perhaps inciting a memory of the sense of moving one’s body through nature. Johns also recognizes the masculine associations of the Western landscape, and of the history of landscape painting, and tries to elicit what might be considered a more feminine sentiment. Balancing restraint and abandon, her process confounds horizon, perspective, gesture, and color with the intent to evoke a sense of possibility.

Elisa Johns received a BFA from University of California San Diego and an MFA from Claremont Graduate University. Recent solo exhibitions include “Kings Canyon” at Ochi Projects (Los Angeles, CA) and “Wild flowers” at Walker Contemporary (Boston, MA). The artist has exhibited at Black Dragon Society (Los Angeles); Mike Weiss Gallery (NYC); and Elizabeth Dee Gallery (NYC). In 2018 Johns showed recent paintings alongside jewelry by artist Jennifer Odell at Morgan Lehman in the two-person exhibition, “A Tale of Five Rings”. Johns’ work has been written about in numerous publications including Art in America, Whitehot Magazine, and the LA Times.

The artist lives and works in Los Angeles.