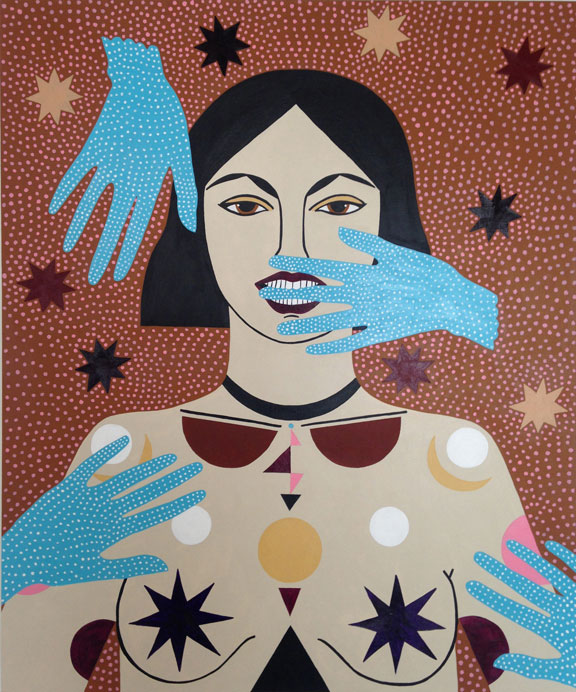 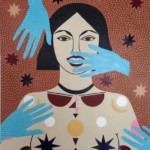 Caris Reid: Feast or Famine, acrylic on panel, 24 by 20 inches 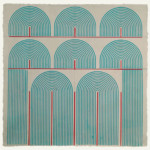 Monya Rowe Gallery is pleased to present a two-person exhibition of paintings by Elise Ferguson and Caris Reid. The title of the exhibition, “Mount of Venus”, refers to the area below the thumb that in Palmistry is believed to reflect an individuals sense of passion, sensuality and creative nature. The larger the “mount” the more untoward virtues prevail: debauchery, effrontery, vanity. A “healthy” mount reflects a warm passionate nature. The paintings of Ferguson and Reid, while very different in approach, both inhabit a sense of sensuality and balance. There is a strong desire to maintain harmony.

Inspired in part by architecture, 20th Century textile designers – Sonya Delaunay (1885-1979) for instance – and Hard-edge Abstraction, Elise Ferguson‘s works vacillate between geometric abstractions and sculpture. She uses a layered and systematic approach that involves pouring several layers of pigmented plaster onto an MDF panel, masking off parts of the pattern, adding more layers and finally pressing it through a special silkscreen. Ferguson allows the drips from the plaster to organically converge at the edge of the work to create a physical presence of the materials. Quirky, yet cerebral, Ferguson’s grids and optical patterns radiate a tactile appeal.

Caris Reid‘s intimate portraits are a contrast to the cool colors and abstraction found in Ferguson’s work. Reid depicts female archetypes of strength rendered in flat planes of color amid various iconography related to astronomy, botany and mysticism, to name a few. Decoding the symbolism is an intrinsic part of the work. Like Dorothy Iannone (b.1933), Reid’s commanding, sometimes pensive, women are graphically depicted in bold colors and crisp edges. They are complicated and their full state of being is ambiguous, but the symmetry and sinuous shapes reflect a sense of harmony.

Ferguson and Reid both create a formally hypnotic space that embraces a world of imperfections while ultimately longing for stability.

Elise Ferguson (b. 1964, Richmond, VA) received a MFA from the University of Illinois at Chicago, IL and a BFA from The School of the Art Institute of Chicago, IL. Her work was recently the subject of solo exhibitions at Halsey McKay, NY and Romer Young Gallery, San Francisco, CA. Recent group exhibitions include Joshua Liner Gallery, NY and Albada Jelgersma, Amsterdam, The Netherlands. In 2017 Ferguson completed an Artist-in-Residence at Barton College, Wilson, NY. She has also completed residencies at the MacDowell Colony, Peterborough, New Hampshire and Socrates Sculpture Park, Long Island City, NY. Ferguson lives and works in Brooklyn, NY.