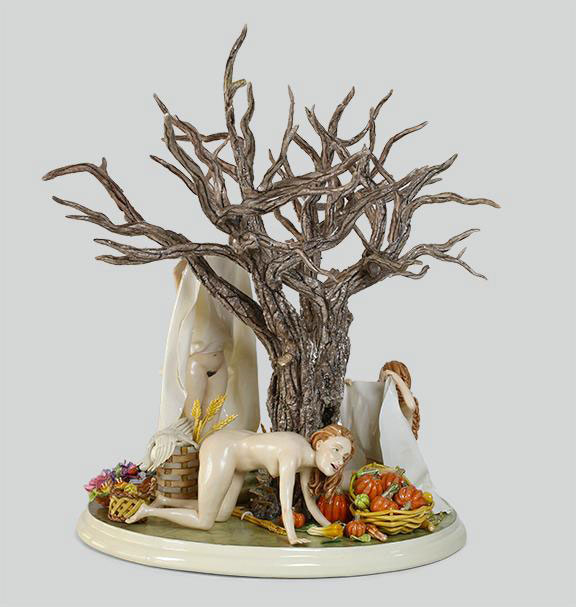 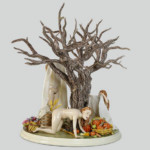 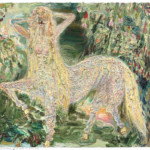 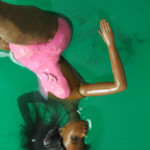 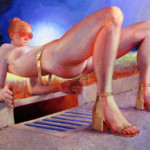 All of the artists in the exhibition, unlike de Beauvoir’s characters, are experiencing the societal pressures that the author exposes before their own middle-age. With the age shift and current contemporary conditions still unfavorable to women’s rights, this exhibit hopes to offer a reflection on this condition and perhaps a temporary antidote to the current state of our time.

Elizabeth Glaessner (b. 1984, Palo Alto, California) currently lives and works in New York. She received her BA from Trinity University in 2006 and completed her MFA at the New York Academy of Art in 2013. She was awarded a postgraduate fellowship at the New York Academy of Art in 2013, a residency at GlogauAIR Berlin in 2013 and a residency at the Leipzig International Art Programme in 2012. She has been included in group exhibitions in New York, Texas and Germany and has recently been featured in Berlin ArtParasites, Whitewall Magazine, and LUUPS Munich and Leipzig. Glaessner’s paintings take elements from traditional history painting and re-contextualize them in a distinctly intimate and otherworldly voice. An exploration of memory, personal history and ritual, Glaessner’s work questions the way in which we relate to and envision our past. Her most recent paintings depict a highly detailed mythology of post-human existence on earth that features anthropomorphic, gelatinous figures in familiar, yet toxic, landscapes. These organic creatures appear as if born from natural forms, like tree trunks and rock formations, in an attempt to reconstruct lost histories through the detritus left behind.

Lauren Kelley (b. 1975, Baltimore, Maryland) currently lives and works in New York. In 2015 she was the Creative Capital Award winner. In 2011 she was a Louis Comfort Tiffany Award recipient and, in 2007, was presented an inaugural Altoids Award through the New Museum. She has been a resident of the Skowhegan School, the Museum of Fine Arts Houston, the Glassell School’s Core Program and the Studio Museum in Harlem, and the Marie Walsh Sharpe Studio Program. Her work has been exhibited in such venues as the New Museum, Spelman College Museum of Fine Arts, Sikkema Jenkins & Co., The High Line, and the Contemporary Art Museum Houston. Reviews of her work have appeared in The New York Times, The New Yorker, Art: 21 Blog, Art in America, ArtLies, Houston Chronicle and Houston Press. Inspired by the malleable nature of young minds and the twisted intricacies of immature adults, her work is a response to historical narratives. Her animated tales have been culled from ideas supported by 1970s feminist logic, and the 1940s Doll Tests, a race-based psychological study of Black American youth. Kelley’s studio practice is interdisciplinary and for the past six years, she has focused on a labor-intensive body of work as a response to 70s gender politics, and notions of female strength.

David Mramor (b. 1984, Cleveland, Ohio) lives and works in New York. He received his BFA from Ohio University, and his MFA from the School of Visual Arts, New York. He currently has an exhibition at Louis B. James in New York, on view until July 17th. Mramor has exhibited nationally and abroad, including at Maurizio Cattelan’s New York Gallery, Family Business; Ronchini Gallery, London; and Gavlak Gallery, Palm Beach, Florida. Mramor deals with the construct of memory within a photographic image or memento, through deconstructing images using an Epson printer. Most of the painting and mark-making is applied before or during the canvas’s run through the printer. Mramor sees the rhythm of the machine as a tool for his direct application. The marks document time as much as the photograph documents the moment. The “Venus” series was created using two early photographs of the artist’s late mother. All of the painted gestures applied to the surface within these paintings were applied as a “meditation on the photographs.” In the latest series of paintings Mramor pulls from some of his past performances as his feminine pseudonym, Enid Ellen. The name Enid pulled from Sweet Valley High. Ellen pulled from Ellen Degeneres. Enid Ellen plans to perform original songs written with Greg Potter at P •P •O •W on Thursday, July 21st at 7pm.

Allison Schulnik (b. 1978, San Diego, California) currently lives and works in Los Angeles, California. She earned her BFA in Experimental Animation from the California Institute of the Arts. She has had solo exhibitions at the Wadsworth Atheneum Museum of Art; Laguna Art Museum; Oklahoma City Museum of Art; Nerman Museum of Contemporary Art; ZieherSmith Gallery, New York; Rokeby Gallery, London; Unosunove Arte Contemporanea, Rome; and Division Gallery, Montreal. Schulnik’s work is in the public collections of the Los Angeles County Museum of Art; Nerman Museum of Contemporary Art; Museum of Contemporary Art, San Diego; Santa Barbara Art Museum; Museé de Beaux Arts, Montreal; Farnsworth Art Museum; Laguna Art Museum; Montreal Contemporary Art Museum; Wadsworth Atheneum Museum of Art; and Montreal Museum of Fine Arts. Schulnik choreographs her subjects in compositions that embody a spirit of the macabre, a Shakespearian comedy/tragedy of love, death and farce. The subjects often stare back at the audience and study them as they are in turn studied, aware of their ancestors from the “Grand Theme” works of the past, the genre paintings that inform them. Although a haunting sense of foreboding, discomfort and unease is palpable, a sense of understanding, compassion and hopefulness for her cast of characters is still evident in the heavy impasto paintings. Her sculptural use of oil paint references her clay-animation background, as a motion-like sensibility affords her paintings unparalleled depth and energy. Schulnik has an upcoming solo exhibition this fall at ZieherSmith in New York.

Jessica Stoller (b. 1981, Detroit, Michigan) currently lives and works in Brooklyn, New York. She received her BFA from the College for Creative Studies, and an MFA from Cranbrook Academy of Art. Stoller’s work has been reviewed, in The New York Times, Ceramics: Art and Perception, and N. Pandora Feminist Journal, among others. She has been included in recent exhibitions at Greenwich House Pottery, New York; Wave Hill, Bronx, New York; and the Fuller Craft Museum, Brockton, Massachusetts. Stoller has had recent solo exhibitions at Hionas Gallery, New York and The Clay Studio, Philadelphia. Additionally she has participated in the Kohler Arts & Industry Program, Sheboygan, Wisconsin, and The Museum of Arts and Design’s Open Studio Program, New York. A recent Pollock-Krasner Foundation grantee, Peter S. Reed grantee and Louis C. Tiffany nominee, Stoller’s work is also included in numerous private collections including the collection of the Vehbi Koc Foundation in Istanbul. Stoller uses clay and the grotesque as a vehicle to explore the constructed, often idealized world of femininity, gathering imagery across cultural lines and histories. Porcelain is her primary medium, a historically weighted material that is intrinsically linked to desire, mystery and consumption.

Robin F. Williams (b. 1984, Columbus, Ohio) currently lives and works in New York. She received her BFA from the Rhode Island School of Design. Williams has been included in numerous exhibitions internationally and abroad including an exhibition at Gallery Poulsen, Copenhagen, Denmark. Her work is currently on view in Et in Arcadia Ego at the New Museum Los Gatos, CA. Williams has been honored as the Josephine Mercy Heathcote Fellow at The MacDowell Colony and the 2010 Brooklyn Academy “Playbill Artist.” Her work has been featured in numerous publications including The Brooklyn Rail, Juxtapoz, and The Observer. Through an exploration of psychological portraiture, Williams’ previous series of works depicted narratives surrounding children, teenagers and men. Williams’ experimental painting techniques have continued to develop alongside her expanded subject matter. Within these works Williams draws resemblance from a number of sources including the innovative mark-making of post-impressionist Georges-Pierre Seurat, the paintings of Mary Cassat that re-cast the role of women over a century ago, the paintings of Edouard Manet that postured the role of the viewer as active participant in the painting’s narrative and the psychedelic palette of nineties graphic designer Lisa Frank.