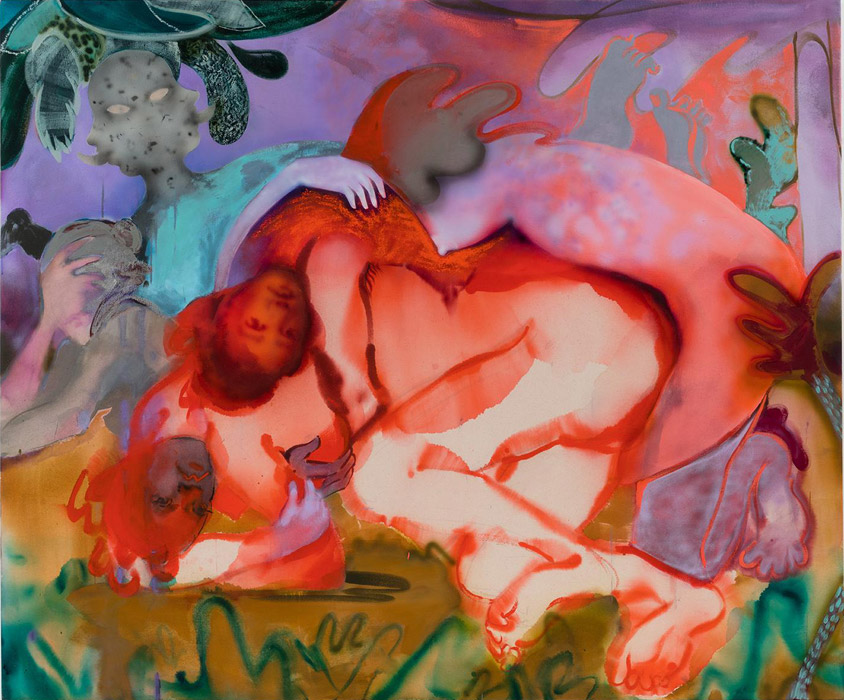 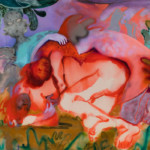 P·P·O·W is pleased to present “Mother Tongue”, Elizabeth Glaessner’s second solo exhibition with the gallery. The exhibition explores the way language and personal and collective histories are formed and passed down, through a series of paintings on canvas, scroll paper, and large silk banners draped from the ceiling.

Glaessner’s brightly hued paintings teem with life, drawing on personal history, memory and ritual, both real and imagined. The works depict a utopian and surreal universe that Glaessner has been exploring in her work over the last decade, featuring theatrical and celebratory figures that blur the line between myth and reality. Glaessner has had a long-time fascination with the way ancient societies immortalized their leaders through the repetition of stories passed down orally and visually through depictions on murals and objects, often resulting in exaggerated and performative figures. Glaessner mirrors this idea with her scroll works – a material new to her practice – forming a visual narrative that expands and gains meaning through the repetition of imagery, including motifs inspired by her personal memories, prehistoric friezes, and rituals drawn from myths.

Among the works on view will be vibrantly colored, large-scale silk works, hung from the gallery ceiling. Glaessner was drawn to silk as a way to create works that tow the line between drawing and painting. The works themselves are translucent, and the experience of viewing them is impacted by whatever surrounds them. At P·P·O·W, the works – which variously show her subjects in intimate embraces, performing daily tasks, or enacting fantastical rituals – will be installed in front of Glaessner’s black and white paintings and scrolls, allowing visitors to see through the transparent veil of color and into the rest of the room, as if entering another dimension.

Throughout these works Glaessner depicts characters questioning stereotypical behaviors and ideas of morality. The works on view present an opportunity for Glaessner to examine the line between good and evil, moral and immoral, safe and dangerous, and the grey areas in between. The figures portrayed reflect an unrestricted freedom of identity, both emotionally and physically, and are often androgynous. Glaessner frequently shows her subjects in states of ecstasy or hysteria, celebrating the purity of emotional expression that most are too afraid to confront.

Glaessner’s choice of material and purity of expression reference the visceral and frank exploration of the body pioneered by Carolee Schneemann and Nancy Spero. The work also draws inspiration from German-Jewish artist Charlotte Salomon who, before she was killed in the Holocaust, painted 800 gouaches titled “Life? Or Theatre? A Play With Music”, many of which reflected an imagined daily existence, a re-writing of personal history. Glaessner’s works too, reflect a world that is both past and present, real and imagined, exploring the fluid nature of time through materials that invite multiple points of entry and understanding.

Elizabeth Glaessner was born in Palo Alto, California in 1984 and grew up in Houston, Texas. After receiving her BA from Trinity University in 2006, she moved to New York and completed her MFA at the New York Academy of Art in 2013. She currently lives and works in Brooklyn. She was awarded a postgraduate fellowship at the New York Academy of Art in 2013, a residency at GlogauAIR Berlin in 2013 and a residency at the Leipzig International Art Programme in 2012. She has been included in group exhibitions in New York, Texas, and Germany.