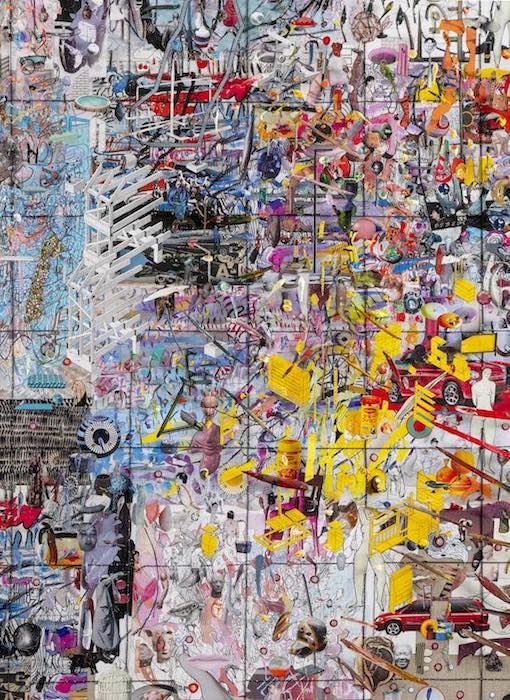 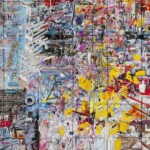 Regen Projects is pleased to announce “Clearing”, an exhibition of new work by Elliott Hundley. Forgoing an explicit narrative structure, Hundley furthers his investigation into the language and material process of abstract painting, collage, and sculpture. This will be his fifth solo exhibition at the gallery.

Clearing, referring to a spatial opening or a meditative clearing of the mind, marks a decisive development in Hundley’s practice. Known for his wide use of media and quotidian objects, the works in the exhibition privilege time and artistic practice over control and intention. Culling over 20 years of archival material from the studio, Hundley embraces the degradation and resuscitation of imagery throughout his practice to create constellations of new meaning imbued with his personal sensibility and methodology via collage and painting.

There will be five panel works in the exhibition. “Clearing III” features four rows of automatic drawings, photographed and reprinted at different stages of completion in chronological order. Fluid gesture and rhythmic process give rise to form, perceptible through a yielding of narrative restraint in favor of materiality. The dichotomy of the rigid lines and supple drawings create a fixed emotional tension – visceral and captivating – yet meditative. Corporeal fragments from his photographs, found mechanical renderings, and other signifiers punctuate the surface of the work transforming it into a poetic landscape that is representative of Hundley’s distinct visual language. The panels’ lyrical compositions demonstrate Hundley’s expansive knowledge of history, literature, and theater thereby coalescing new relationships and oppositions.

Three benches with accompanying sculptures will anchor the gallery space. Finished in bronze, Hundley renders an aura of permanence and artificiality in the objects. Accrued patina left behind by handling leaves an ephemeral gesture, reiterating the body as an instrument of performance.

“Under Hundley’s meticulously improvisational direction, the formal and pictographic elements collide, combine into molecular configurations of meaning, disintegrate, and recombine, in a process that is analogous to the way our churning human consciousness constantly makes sense out of the flood of phenomena with which it’s confronted.” Doug Harvey, “Cut Up or Shut Up: The Unspeakable Narratives of Elliott Hundley”, Elliott Hundley: The Bacchae, 2011

In addition to his artistic practice, Hundley is the inaugural curator of “Open House”, a group exhibition at the Museum of Contemporary Art, Los Angeles that features works drawn from the permanent collection. The exhibition furthers his exploration into the visual and material language of collage and is on view through September 16.

Elliott Hundley (b. 1975) received his BFA from the Rhode Island School of Design (1997) and his MFA from the University of California, Los Angeles (2005). He lives and works in Los Angeles.