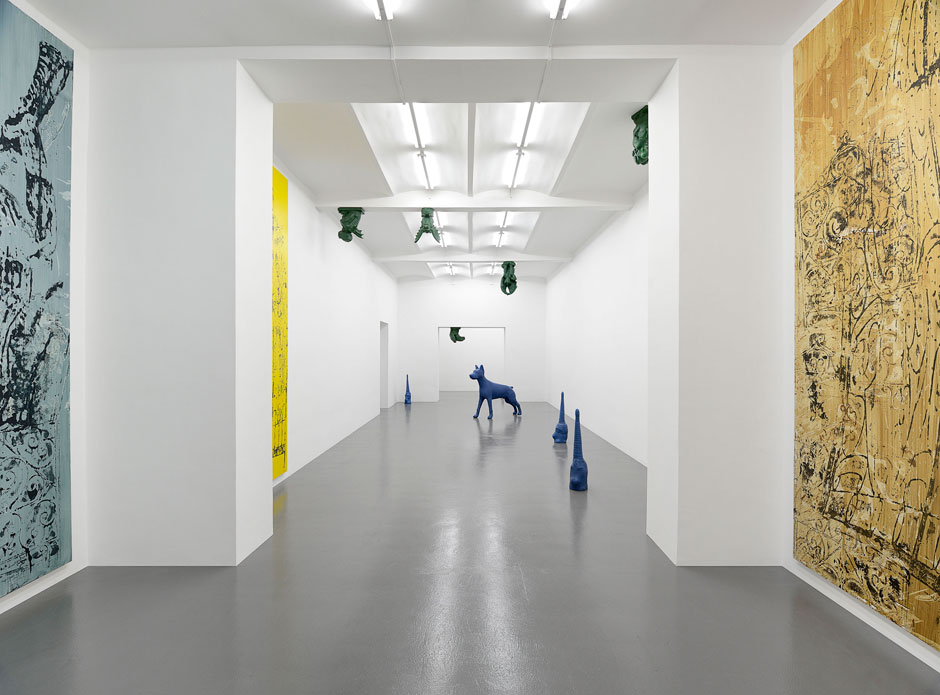 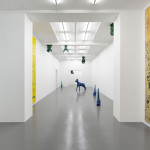 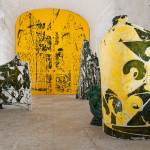 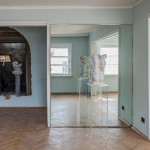 SALTS is pleased to present “The Night Holds Terror”, an exhibition by Emanuel Röhss, which is part of the artist’s current examination of the relationship between The Ennis House in Los Angeles (Frank Frank Lloyd Wright, 1924) and the entertainment industry, most notably Hollywood Motion Pictures. For this new installation Röhss is appropriating the language of movie set fabrication, yet neither the content nor the layout of the show are direct adaptations of the original house or any of the films related to it. The installa- tion is devised after a new narrative that the artist developed from a range of stories he collected while researching the rich legacy of the Ennis House.

Frank Lloyd Wright’s sources of inspiration – the main Mayan temple in Uxmal, Mexico, and his progressive rationale for modern architecture – provided the seminal principles according to which the house was developped. Although such references are still palpable, the building is in a state of constant decay and has been colonized by the local film industry, who has managed to impose its aestetics through an ever growing range of movie sets. From a sci-fi apartment, a time machine, a love nest, or a cyborg battlefield, to a dandy home and the headquarters of the Yakuza mob, the signature building of the godfather of American modernism has slowly become the prime location for Hollywoodized domesticity.

Röhss’ project deals with how the house has been mediated throughout time, and the many fictional worlds Hollywood gave a vast audience access to. The artist sheds light on a building that has turned into a virtual being and isn’t only a place of residence, but has become a creature shaped after all the narratives and events it has served as a stage for, and the many characters who transited through it. Similar to the “House on Haunted Hill” (William Castle, 1959) the Ennis House has a greater autonomy than any of its inhabitant, and no visitor can ignore its daunting aura: it might feel welcoming at time, but will certainly hold terror at night.

Drawing from sources such as “The Day of the Locust” (John Schlesinger, 1975), Ridley Scott’s” Blade Runner” (1982), T3 and Michael Jacksons music video “Why” (1996), the video games “Minecraft” and “Half Life II”, Helmut Newtons’ shoot of Barbara Leigh for Playboy Magazine (1990), as well as the TV show “Invitation to Love” in Lynch’s “Twin Peaks” (1992), to mention only but a few, Röhss has written a text based on the characters, elements and environments that contains literal appropriations or amalgamations of his research sources. Himself a protagonists of the story, he features with his girlfriend breaking into the House, in which both are faced with a number of challenges that they need to over- come in order to reveal the secrets kept by the House. Titled “Location Scout”, the text will be published as part of an artist book in 2016.

“The Night Holds Terror” is the second part of an exhibition trilogy that succeeds an initial iteration at Johan Berggren Gallery (Malmö, Summer 2015), and will be followed by a third show at Thomas Duncan Gallery (Los Angeles, January – February 2016). Röhss’ book, Location Scout, is due to be released by CURA at LA Art Book Fair (MOCA, Los Angeles) on February 12-14, 2016.