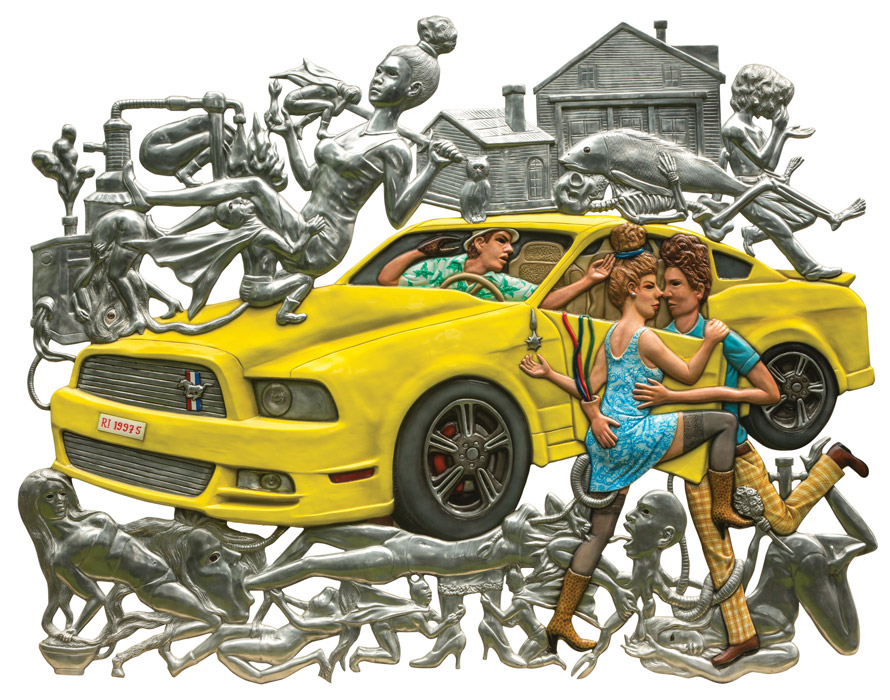 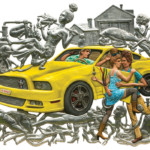 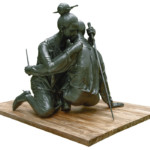 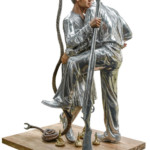 Entang Wiharso, one of Indonesia’s leading contemporary artists, with his American partner and wife Christine Cocca and their children have been dividing their time between Yogyakarta, Indonesia and Rhode Island, US for many years. Wiharso’s work has always stemmed from this very duality in cultures and experiences – national identity, migration, race, political states and power conflicts are some of the common issues Wiharso throws into sharp focus.

Thus Wiharso’s work manifests such schisms and anxieties, with not only reverence for the folklore and history of his own Javanese culture, but also a strong recognition of the yearning for identity and belonging. For children as his who can they have pride in their dual heritages and how are they to navigate today’s complicated landscape?

In his new exhibition at Marc Straus Gallery, “Promising Land”, Wiharso challenges the notion of The Promised Land. His myriad of esoteric symbols and coded imagery poignantly convey the sense of struggle in Man’s constant pursuit for this utopia.

His art takes the form of frieze-like metal wall reliefs that reference Javanese traditional arts. One sees these carved into the stone walls of the ancient 9th century temples in Borobudur, Yogyakarta, preaching the story of Buddha to the initiates.

Wiharso amalgamates Eastern and Western symbols; they are freely transposed much like the assimilation of one culture into another through centuries of migration. His work conjures imagery of weapons such as rifles and swords, symbolizing the need for protection; rice bowls for provision and salvation. Elongated limbs and hair contort into snake-like tendrils perhaps alluding to danger. Fire and smoke represent the frustration and hopelessness one sometimes feel.

Presenting an autobiographical cast of characters, it is not unusual to see Wiharso or his wife Christine often portrayed as fearless warriors. In the sculptures “Double Protection” and “Golden Sweat”, we see the couple entwined not in passion’s embrace, but rather armed with the weapons looking over each other’s back. Their children, in contrast, are more vulnerable when he dons them playfully with superhero masks and capes.

In much of the new works, there is a strong sense of Americana. Automobiles prototypically are synonymous with the muscle of Capitalist America and the promise of the American Dream. Now across the planet in an interglobal economy, the rich get richer, but at what cost? Along with Cadillacs and yellow VW buses is imagery of debauchery, but always with a reference to one’s mortality.

In the most introspective of works “Self-Portrait In Front of Art History,” the Indonesian artist is in conversation with the American giants: the maximalist style of Frank Stella, the flat color sections of Ellsworth Kelly, and the rust of John Chamberlain. But his family is here too, precariously stacked in a Brancusi endless column, ready to topple if he fails.

The extraordinary power of Wiharso is to provide the viewer with rich, loaded imagery while allowing each of us to continue the narrative.

Entang Wiharso (b. 1967 Central Java, Indonesia) studied painting at the Fine Art Department of the Indonesian Institute of Arts, Yogyakarta, Indonesia. In 2013, he was one of five artists representing Indonesia in the 55th Venice Biennial. He was included in the Prague Biennale 6 in 2014. Important solo exhibitions include the Galeri Nasional Indonesia, Jakarta, Indonesia, Singapore Tyler Print Institute, Singapore, and Kalamazoo Institute of Art, Kalamazoo, MI. He has been included in numerous group museum shows including the Mori Art Museum, Tokyo, Japan, Musée d’art contemporain, Lyon, France, the Singapore Art Museum, Singapore and the Museum of Contemporary Art of Rome, Rome, Italy. Entang Wiharso is represented by Marc Straus, New York; Arndt, Berlin and Singapore, Primo Marella, Milan; Can’s Gallery, Jakarta, and Bernier/Eliades Gallery, Athens and Brussels.