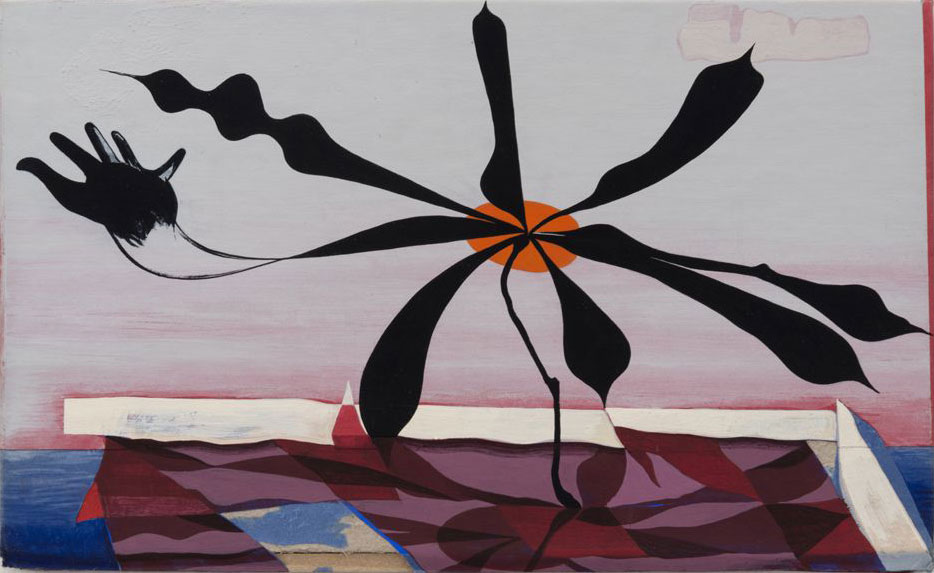 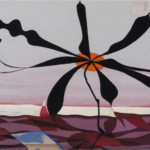 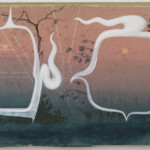 Erik Schoonebeek: Too Much for Title, 2016, gouache and acrylic on book cover, 5 x 7 inches

Schoonbeek is a scavenger. Book covers, found paper, re-purposed paintings and thrift store finds serve as supports for his paintings.

Using acrylic and gouache, he builds on existing compositions or alters them entirely. Patterns morph into animals, the wrinkled lining of a book becomes the setting for a sun-drenched sky, a crumpled metal disc depicts a range of musical instruments. Found paper, folded in a curving pattern, becomes the curtain surrounding a stage. A broken fence reveals an empty pool.

In “Too Much for Title”, a marshy scene vies with two thought-bubbles, or are they characters in dialogue? Water is splattered throughout. Was it already there or recently painted? For Schoonebeek, what is shopworn or discarded presents a kind of visual puzzle, an opportunity for a tale to be told.

This is Erik Schoonebeek’s second solo exhibition with the gallery. He received his MFA from Rutgers, State University of New Brunswick, NJ in 2011 and his BFA from State University of New York at New Paltz in 2006. His work has been at exhibited at Dorsky Curatorial Projects, NY; David Shelton Gallery, Houston; Rawson Projects, NY; Brick Walk Fine Arts, West Haven, CT; DNA Gallery, Provincetown; Geoffrey Young Gallery, Great Barrington and other venues. He lives and works on Brooklyn, NY.