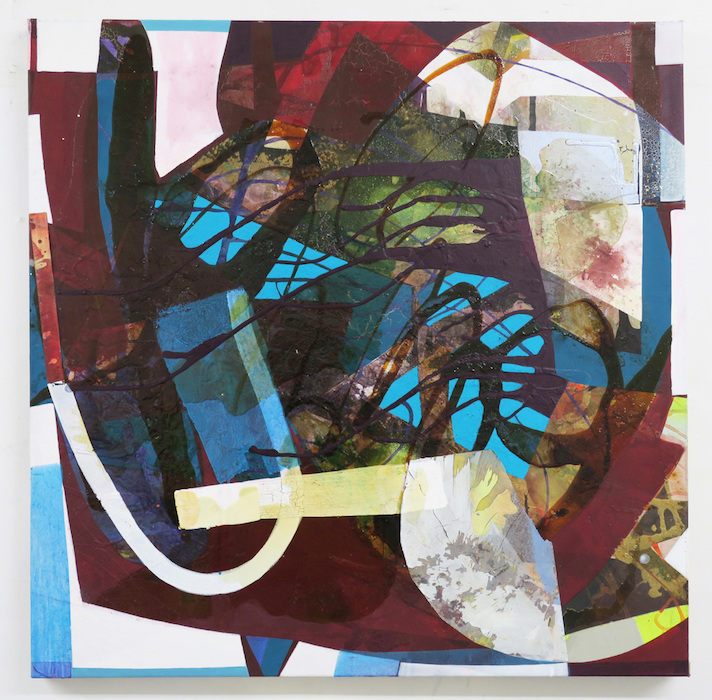 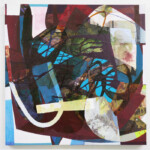 Freight + Volume is pleased to announce “Dear God,” an exhibition of mixed-paint media paintings by Erika Ranee. Presenting works both on paper and canvas, Erika Ranee’s work exudes lively, fast tempo pours of paint layered alongside meticulous markings of larger shaped opaque spaces that duke it out for one’s optical attention. Her works vibrate with energy. The biomorphic shaped pours, alongside structured curvilinear shaped areas, weave in and out of the painting structure of foreground and background spaces. Ranee’s use of flat shapes ground these abstractions, which hone a likeness to geological objects, molten metals, water, plants, cells, prehistoric amber resins, estuaries, and urban landscapes.

The show’s title, “Dear God,” gives reference to the artist’s ongoing dialogue with a God in purely aesthetic ruminations. We tend to seek an almighty presence more often in times of desperation and fear. But what if the works in “Dear God,” reference the spiritual experience of contemplation, by observation necessitated by arranging and configuring a painting? In “Mothership”, Erika Ranee creates soft atmospheric spaces with the vehicle of spray paint which annuls hard edges with vapor-like boarders. This softness is at immediate reading very inviting, with warm oranges and electric pinks, set alongside flat colors of sky blues; it almost feels as if one is floating in the ether amongst heavenly star beings. The deep blue spaces in “Mothership” also read as dark matter, as an area full of something that we scientifically still don’t understand.

The painting “You” has gentle atmospheric blues that are reminiscent of water flow, rain currents, or estuaries. The muted red-purples are reminiscent of blood cells, as the red-purples play along the background of blue and darker snaking lines, becoming internal rivers and circuits of body liquids, which flow to the heart just as rivers course to the sea. You also has a wonderful repetitive rhythm: if it were a Jimi Hendrix song, the melody would play alongside the edge of the painting, with all the frenetic energy of fast guitar wails emanating from the center. Hendrix’ voice, at once raspy and smooth, would oscillate and break the plane of your ears and mind just as Erika Ranee’s paintings soothe and meander between their internal spaces. Immediacy and weight are present in Ranee’s work. The deliberation of Erika Ranee’s paintings cannot escape its own energy – it can only be metabolized by the viewers.

Erika Ranee received her MFA in painting from the University of California, Berkeley. She is a recipient of a New York Foundation for the Arts (NYFA) Fellowship in Painting and has attended the Artist in the Marketplace (AIM) seminar program at the Bronx Museum, as well as the Skowhegan School of Painting and Sculpture. She was an AIRspace resident at Abrons Arts Center, 2009/10, and was awarded a studio grant from The Marie Walsh Sharpe Art Foundation, 2011/12. Her work has been exhibited widely in New York: at the Bronx Museum, THe Last Brucennial, The Parlour Bushwick, BravinLee Programs, Storefront Ten Eyck, FiveMyles, TSA Gallery, David & Schweitzer Contemporary, and MAW Gallery. In early 2018 her work was featured in a group exhibition at the Southampton Arts Center, Long Island, NY. In the summer of 2018 her work was featured in concurrent group shows at Geoffrey Young Gallery in Great Barrington, MA; at Lesley Heller Gallery, and Klaus von Nichtsaggend Gallery as well as 2 concurrent solo exhibitions at Ground Floor Gallery and BRIC/Project Room. In early 2019 her work was featured in a solo show at Lesley Heller Gallery/Project Space and a group show at Wild Palms in Dusseldorf, Germany. Her work has been mentioned in several publications including The New York Times, San Francisco Chronicle and Artforum. She lives and works in New York.

A full-color, limited edition artist book will be available for purchase at the gallery or online.