Erika Ranee – Sleep on the Wind 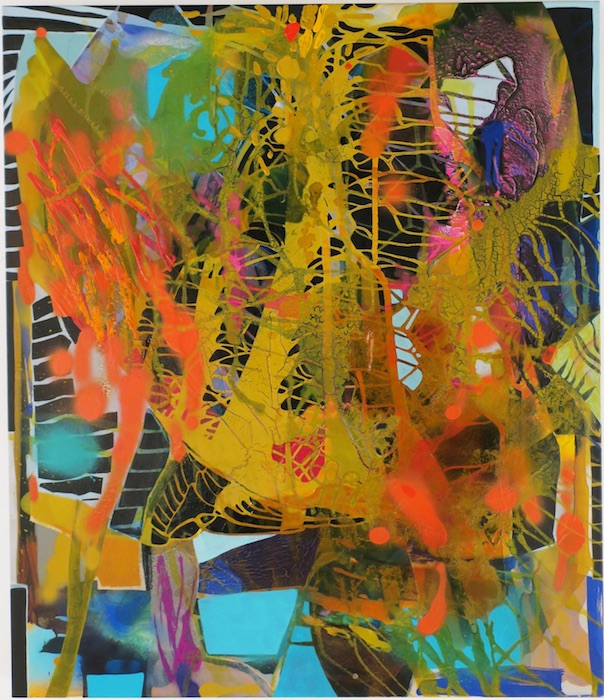 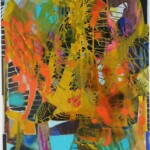 Freight + Volume is thrilled to present “Sleep on the Wind”, our second solo exhibition with Erika Ranee. The title is lifted from a monologue delivered by Marlon Brando in the film “The Fugitive Kind”, based on Tennessee Williams’s play, “Orpheus Descending”. Brando’s character speaks of tiny, light blue (transparent) birds that don’t have legs, so they never land – never stop flying: “…they spread their wings out and sleep on the wind.” In the same way, Ranee’s practice never stops evolving – each painting is built through a process of layering, drawing from the detritus of her daily life. Artifacts are embedded, obscured and sometimes revisited; liquid conduits and synapses connect and ooze through paint and water networks like blood, cells and heartbeats. In this way, Ranee’s works announce themselves, communicating a quality specific to their development in the manner of an organism.

For instance, a work titled “Wonder Bread” (2020) is less collage than assemblage. The layering of elements, brought into focus in terms of a metallic, silver sheen, indicates experiential engagement, without actually being identical with the experience itself. Even the use of metallic elements is less an assertion of the materiality of metal, and more like a symbol, an image, an apparition. The metallic symbol is striking, given Ranee’s usual plant-like shapes and colors. In “Touch My Hair” (2021), for example, the shapes can look like mushikui – a Japanese word for bug-eaten plants – and suddenly the negative space, the space that has been eaten, becomes recognizable. “Touch My Hair” is just as much assemblage; layered shadows and mushikui become expressive symbols. Like the simplest of statements – such as the lyrics of George Clinton, Lee “Scratch” Perry, Led Zeppelin, or Jimi Hendrix which play throughout Ranee’s studio as she works – the mushikui and metallic quality inserted into “Touch My Hair” and “Wonder Bread”, respectively, gives way to a kind of unreality, sundered as it is from any functional utility. But having its place, it also takes place: it happens in a memoried fashion, like the semantic particle of a song lyric communicated, but not attended to.

Another work, “You’re Not Wrong” (2021), restates how semantic elements (here re-described as found objects) dissolve into an aesthetic gestalt – not unlike the way a musical note, its tone, is defined by the series of notes which precede and follow it. Composed of many papered surfaces – ranging from decorative wallpaper to other found fragments already withered by time – this work is anything but surface, instead being contingent on the connotations inherent in the materials she uses. You’re Not Wrong seems to brim with a furtive consciousness, as though it were an organism one could overhear itself thinking.

Unlike a mobile, Ranee’s works do not simulate life in its sheer dramatic state as a body in motion. Rather, her paintings have the deliberateness of an archive: a windswept categorization of different emotional registers suggested by the variegated materials she uses. What we’re viewing across each work is nothing less than the image of a memory, an intimate duration of a life exposited in spatial terms. Allowing the surface of a picture to open outwards to the world, Ranee captures experiential details that are equally searching, soulful, and true to life.

Erika Ranee received her MFA in painting from UC/Berkeley in 1993. In 1996 and 2021, she was the recipient of a New York Foundation for the Arts Fellowship in Painting. She was also awarded the AIM Fellowship from the Bronx Museum, and was granted residence at the Skowhegan School of Painting and Sculpture. She was an AIRspace resident at Abrons Arts Center in 2009 and was awarded a studio grant from The Marie Walsh Sharpe Art Foundation in 2011.

Ranee’s work has been exhibited widely in New York. In 2021, her work has been featured in group exhibitions in New York at Steven Harvey Fine Art Projects, at MOTHER Gallery, and at Platform Project Space, as well as two solo exhibitions at Keyes Art Gallery in Sag Harbor, NY and at Freight + Volume, NYC. Ranee’s work is held in the permanent collections of The Studio Museum, Flint Institute of Arts, Crocker Art Museum, Nina Chanel Abney, Enrique de la Cruz and Leslie Carmine, and Peggy Cooper Cafritz. She lives and works in New York City.

Please note that proof of vaccination will be required to enter the gallery, in accordance with Vaccine Key to NYC.