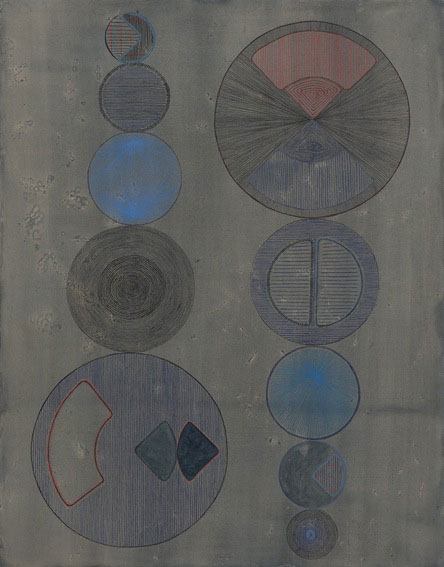 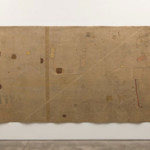 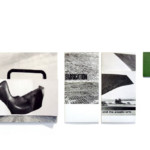 Elena Damiani: Not every resultant is traceable in its components, 2012, Courtesy: the artist

The III Havana Biennial held in Cuba in 1989 was a site and a moment of remappings. Not only did the event coincide with the fall of the Berlin Wall and the ideological and territorial frontiers solidified during the Cold War years. It has since been credited with broadening the global scope of what was considered contemporary art by impelling a shift of focus onto this socialist island in the Caribbean Sea. Given this spirit of interchange between artists from countries beyond the conventional remit of metropolitican centres, it seems fitting that the work that Brazilian artist Montez Magno exhibited at the Biennial that year was a large-scale installation entitled “Caribe” (1989). Like a giant textile map made up of strips and fragments all stitched and frayed, Magno’s work offered a rich cartography of metaphors. It conjured shifting frontiers, diminutive islands, isolation and interconnection: a sea-soaked archipelago shaped by human landings.

As this same work resurfaces today, in the “island” of Switzerland, it does so amid new settings. The recent rapprochement between the United States and Cuba has once again redirected ideological currents and is beginning to generate new flows of transnational capital that had long been staunched. At the same time, art produced in and on Latin America no longer dwells on the peripheries of the global map of contemporary art, but has been made increasingly visible. In this context, we might ask what journeys the artworks gathered here under framework of everyday alchemy allow us to embark on. To what transits and exchanges do their forms and materialities attest? And, what processes of transmutation do these artists stage before our eyes?

From the standpoint of the twenty-first century, with its widespread human conflicts, environmental degradation and economic precarity, the notion of the universal panacea held up as the ideal throughout the long history of alchemy could not seem further away from our horizon. “Everyday Alchemy” dialogues with this milieu, at once acknowledging and interrupting the logic of modernity, in which the material world has been reconceived as a rationalised system of measurable resources, traceable flows, and profitable exchanges. In the works on show, matter is neither an idealised philosopher’s stone, nor simply a mute or inert presence ripe to be hewn into useful and legible forms. Instead, at every turn we encounter matter that is inscrutable and evocative: media, commodities, and objects that have been extracted, recycled, and repurposed in ways that interrupt striated systems of meaning and resist easy classification. The work of art in its double sense – the object itself and the labour involved in its making – cut across conventional systems of the production of value, communication, and the pursuit of “pure” form.

In Latin America and the Caribbean, such aesthetic strategies have deep resonance. Colonial economies of extraction were fuelled by fantastical visions of El Dorado: an alchemist’s dream of a city built in gold that could be pillaged and loaded onto ships bound for Europe. Conquest generated contact zones between vastly distinct worldviews, whose differing conceptions about the natural world have an enduring legacy in the frontiers of extraction in which the rights of nature and the will to profit frequently clash. Art has also been the site of interchanges and transits in the region, in which the frictions between modernist form and uneven modernisation emerge amid unstable yet fertile terrain. Through their works, the artists in this show bring such dilemmas to the surface in oblique and ingenious ways. Elena Damiani’s “Not every resultant is traceable in its components” (2012) is paradigmatic inasmuch as it announces from its very title an epistemological obstacle: the assemblage of found materials circumvents the conventional rules of engagement whereby coherent messages are articulated through context, image and text. Here, the images are several times orphans: stripped of their archival genealogy, their original purpose, and their mode of circulation.

In other works, commodities act as vectors that track histories of global capitalist expansion – transatlantic interchanges through which the colonial gaze has figured exotic and tropical realms as wellsprings of primary resources and as tourist havens ripe for mass consumption. The bleeding border between the Salvadorian indigo dye and pristine white English cotton in Engel Leonardo‘s “Aníl” (2016) suggests an entanglement of places that although distant are by no means distinct. By presenting us with contact zones, the works conjure a cartographic imaginary, perhaps plumbing the inky blue to suggest the ocean as a site of cultural transactions, or dissolving hierarchical essentialisms of purity and otherness through the overlapping colours. These speculative associations run equally through Adán Vallecillo‘s assemblages, in which the reclamation of discarded tyres, which are cut up and repurposed, allows the afterlife of extraction to unfold through the work, disrupting the runaway cycle of extraction, production, and waste. Rubber has historically been ensnared in this cycle, not only through early European incursions into heartlands of the Amazon to tap its trees, but also through the modern spread of industrial plantations and automobile culture, whose contemporary vestiges include the rusting frontier zone of Fordlândia, a ruined company town long abandoned in Brazil.

In Omar Barquet‘s installations, castoff objects also gain a second life, confronting us with a poetics of provisionality where context becomes much more elusive. Against geometric patterns, Barquet configures alternate axes, dis-figuring, shifting, bending, and emplacing found objects that have been extrapolated from their original sites and uses, and re-assembled in ways that conjure past scenarios as spectres revived: a trail of enigmatic remnants from the unknown. Johanna Unzueta‘s meticulous drawings, which although anchored by their titles in specific places and times, trace vibrational fields that are more metaphysical than material. These uprooted works speak more to dimensional expansion rather than site-specificity, at once centring attention on an intimate experience and itineraries and probing the visual potential of micro-acts instead of sweeping epic landscapes. So too, Michael Günzburger, whose works chart fleeting journeys of one, two or three seconds imprinted on the paper as obscure records that are then annotated and opened up as he scribbles on them in ink…

Such works abandon the formal grids associated with cartographic charts, as with urban design and the two-dimensional plane of the canvas. Others, by contrast, allow us to retrace steps to the aesthetic modernism and geometric abstraction that blossomed in Latin America as elsewhere. These explorations of form, colour and movement constitute a living heritage with which contemporary artists continue to dialogue. Monika Bravo‘s multi-media “Bild Objekt” series (2016) probes dynamic interactions between colour and pattern, using everyday materials, like tape, cardboard and fabric, while Bruno Baptistelli’s assemblage of minimalist paintings nod both to Kasimir Malevich and the formal inquiries of Brazilian neoconcretism, as well as recalling, through their divisions and lines, the diagrammatic codings of news publications whose content, in this case, has been made elusively absent, replaced by silence. Otto Berchem‘s “Protest Pieces” series engages in related play with language. Here, he takes archival photographs of social and political demonstrations, from places as distinct as Tunisia and Miami, as his primary materials, suppressing the messages’ of their placards with bold, monochromatic forms. This confrontation of two media produces instances of inscrutability, transforming the photograph into an uncertain document: at once an index of an event in a still-identifiable location and an adulterated record of a specific protest, which has been pushed toward the universalist precept that drove the quest for “pure” modernist form.

In their various ways, these encounters between form and context, between the abstract and the concrete, generate tensions between the notion of aesthetic autonomy and the obdurate materiality of the quotidian world – those sites, histories, objects, and experiences, which through everyday acts of alchemy resurface once again to map speculative and unpredictable terrains.

Lisa Blackmore is a postdoctoral researcher at the University of Zurich who specialises in the Latin American experience of modernity and its visual, architectural and cultural expressions. She worked as a curator and lecturer in Caracas for nearly a decade and is the author of “Spectacular Modernity: Dictatorship, Space, and Visuality in Venezuela”, forthcoming from the University of Pittsburgh Press in 2017.

Andrea Hinteregger De Mayo is an independent culture adviser with sixteen years of experience in the art market. She is the founder and director of Artrepco, an independent consulting firm at the interface of culture, art and the economy. Artrepco offers customized services for academic institutions, artists, collections, foundations, companies and galleries in the fields of curating, intercultural investigations, project planning, research and arts management. Hinteregger De Mayo’s knowledge of Latin American cultures and markets, the characteristics of intercultural exchanges and the promotion opportunities between Latin America and Switzerland are included in her area of expertise. Between 2009 and 2015 Andrea Hinteregger De Mayo cofounded and ran the Gallery Christinger De Mayo Gallery in Zurich, a well-established platform for artists from Europe and Latin America which worked to build bridges between two continents. She has curated art shows in Switzerland, the United Kingdom, Mexico and Brazil. Since 2012 she has been a guest lecturer on the masters degree in for Art Market Studies at the University of Zurich where she has supervised four master theses, including two on Latin America.