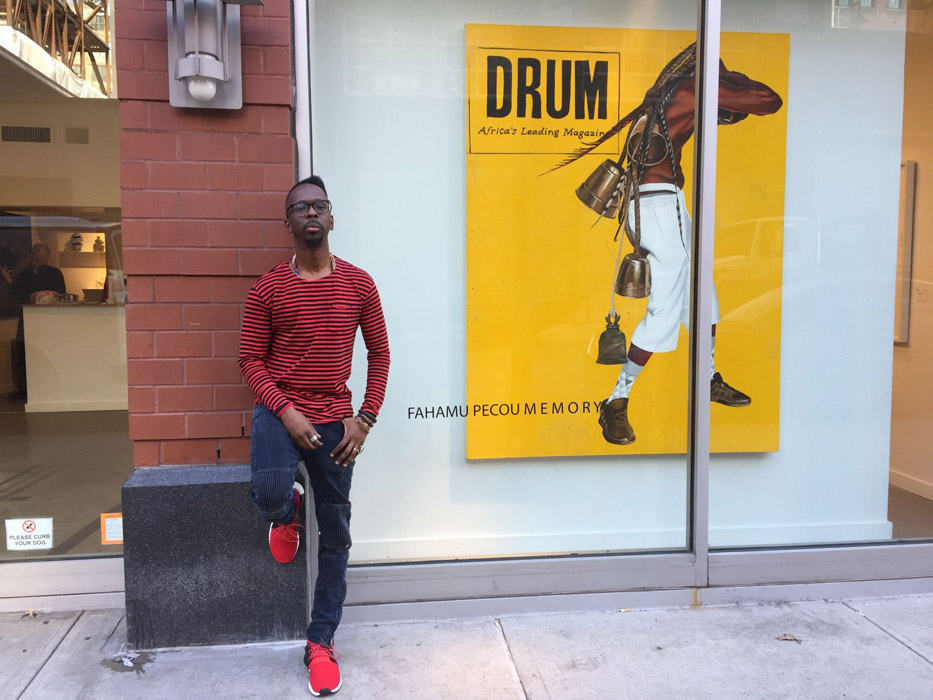 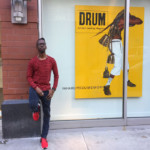 “MEMORY” evidences a conscious, nonlinear step into all periods and styles of Blackness. It is a shift away from Western notions of Blackness towards a decidedly Black aesthetic envisioning a fresh perspective on Black identity past, present and future. With “MEMORY,” Pecou depicts Blackness unbound – free from the confines and limitations informed by lingering misrepresentations of the Black body and prevailing misconceptions of racial inferiority, poverty and/or corruption.

Finding inspiration in vintage Pan-African magazines, Pecou’s latest series combines historic and current cultural motifs to draw us into in his reimagined world. Pecou begins each work by dyeing raw canvas with indigo using traditional techniques. Indigo, once prized by spiritual leaders, royalty and traders throughout Africa, remains profoundly sacred. By beginning his canvases with indigo, Pecou pays homage to ancestral spirits while his subjects bring to mind the modern by way of contemporary poses and fashion.

“MEMORY” also features readily identifiable signs and references from African culture. For example, in the painting titled “Memory”, the figure wears a cowrie collar and peacock feathers. Cowries are a common decorative element but are also revered as sacred objects and often used in rituals and divination in Nigeria and throughout West Africa. The peacock feather has long been associated with the orisha Oshun, a Yoruba deity who has come to symbolize aspects of beauty, royalty, and grace. In “Griot”, the figure wears a mask attributed to the Dan tribe of Liberia. These masks known as ‘gle’ or ‘ge,’ are attributed to supernatural spiritual forces which interact with the physical world through masquerade. Three of works use diamond dust which calls into question the controversial and contentious diamond industry in Africa. Pecou adds a twist, by recreating these traditional masks through new age 3-D printing technologies.

The West African philosophy Sankofa suggests that returning to retrieve what you have forgotten is not taboo. One is perpetually lost when one fails to remember and acknowledge their past. Through reframing histories and pointing towards new destinations, Pecou’s works continue the tradition of unmaking, making and remaking Blackness. Like the sankofa bird, Pecou moves backward and forward simultaneously, shifting our collective identity, vision, and memory.

Pecou’s work has been reviewed in numerous publications such as Art in America, Harper’s Magazine, NY Arts Magazine, among others. Pecou will be honored in 2018 with the NBAF Fine Art + Fashion Visual Artist Award. He is a recipient of the 2016 Joan Mitchell Foundation Painters and Sculptors Award, Artadia Award (2009), the first ever Artist in Resident for the Harvey B.Gantt Center for African American Arts & Culture Resident at the McColl Center for Visual Art in Charlotte, NC (2010) and a winner of the 2012 West Collection Prize. Pecou’s work is featured in noted private and public collections including the Smithsonian National Museum of African American History and Culture, Washington, D.C., the Nasher Museum at Duke University, The High Museum of Art, Paul R. Jones Collection, Clark Atlanta University Art Collection, The Museum of Contemporary Art Georgia, The West Collection and Société Générale, Paris, France, among others. Pecou will complete his Ph.D. degree at the Institute of Liberal Arts (ILA) at Emory University in 2018. The artist lives and works in Atlanta, GA.