Flaka Haliti – My Gravity Slipped Away 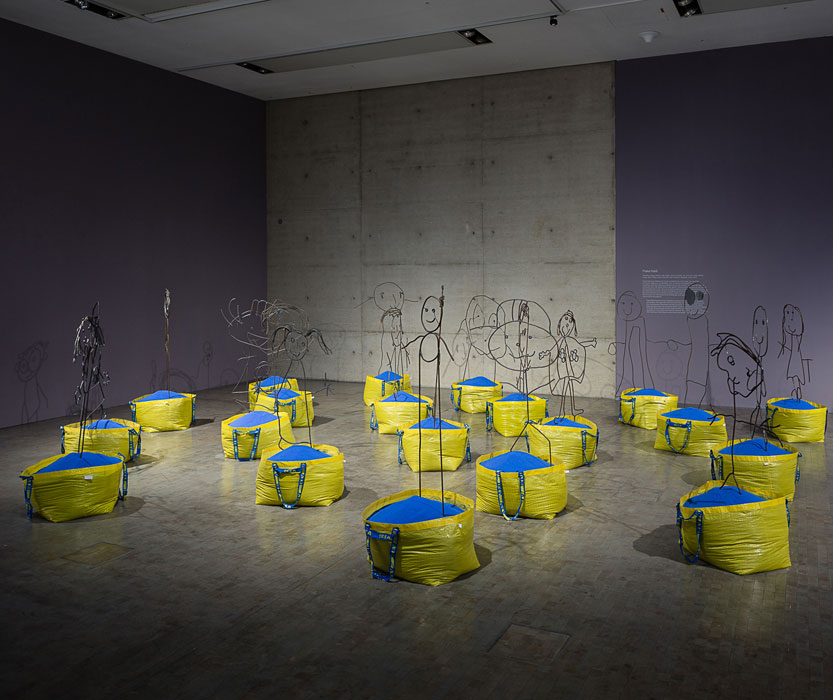 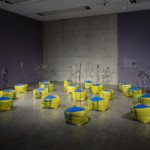 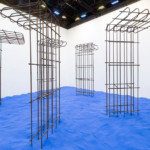 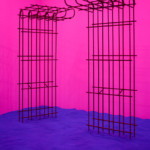 For her first institutional show in Switzerland, Flaka Haliti presents a new body of work consisting of a single environment that the artist developed for SALTS in-door space. The installation comprises of large scale children drawings painted on coloured glass sheets, as well as grid-like wallpaper which covers all three walls of the gallery. Hanging from the ceiling, the glass panels are lit by directional spots fixed to the ceiling, creating a sense of gravity, transparency and distortion. Adding to the optical illusion, the wallpaper emulates a grid of pixels that refers to an empty Photoshop file.

Conceived to be experienced first from a central and frontal point of view, the installation invites the viewer to trespass the rules established by its theatrical construction, and to walk through it in order to enjoy new perspectives on one hand, and to weigh one’s bodily agency from inside on the other. With this surreal landscape, the artist sets to explore the concept of no man’s land, a political notion that suggests a temporary territory that doesn’t belong to any nation. In “My Gravity Slipped Away”, Haliti makes a subtle allusion to the Macedonian-Yugoslav border, where many refugees were deported during the Kosovo conflict in 1999. Exploring notions of equilibrium and visibility – both literally and metaphorically – Haliti’s fragile and poetic environment questions our ability to appear and disappear when locked in a territory free of control and protection.

The drawings on display were originally made by a class of children studying in an international school in Abidjan. Connecting to a narrative of innocence and youth, the figures – in their generic simplicity – also produce a sense of anonymity and loneliness. The fact that the drawings are appropriated from a community of expatriate children emphasises the notion of cultural and geographical displacement. Extending the narrative around the idea of in-betweeness, the grey geometric background functions as an empty territory, not without recalling the grid of an empty map, whereas the size of the pixels suggest a scale that is vain because lacking of reference point.

Flaka Haliti (born in 1982, Prishtina) lives in Munich and Florence. Haliti studied at the University of Prishtina and Städelschule, Frankfurt/M, and is currently working toward her PhD at the Academy of Fine Arts, Vienna. Her artistic practice is based on conceptual ideas and relates in its critical analyses of media and society to her distinctly European perspective. Haliti’s work was presented at venues including Mumok, Vienna; Kunsthalle Wien, Vienna; 6th Moscow Biennial, Moscow; Galerie für Zeitgenössische Kunst, Leipzig; Kosovo Art Gal- lery, Prishtina; ZKM, Karlsruhe; Haus der Kulturen der Welt, Berlin; and Portikus, Frankfurt/Main. In 2016, she represented Kosovo at the 56th Venice Biennale.

We would like to thank Swisslos Basel-Landschaft, Fondation Nestlé pour l’Art, Pro Helvetia & Stiftung Roldenfund for their generous support.