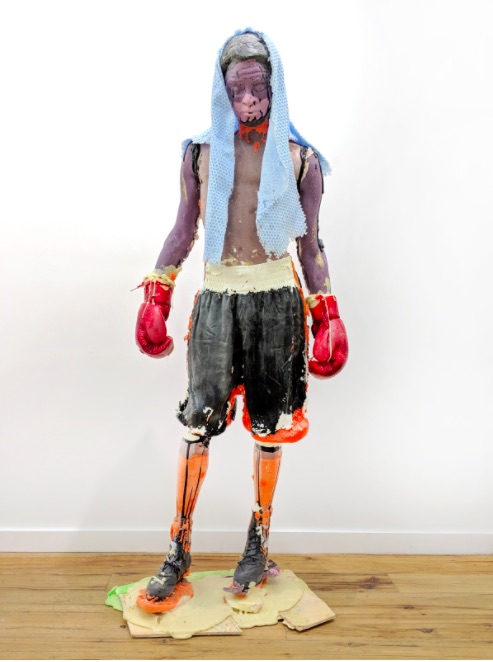 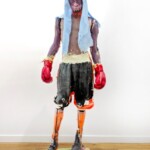 Folkert de Jong is best known for his theatrical, narrative tableaux that address themes of war, greed and power. “When I watch the news or follow the world by the media,” de Jong stated in conversation with critic Steven Cox in 2013, “I can’t believe what I am hearing and seeing, it seems like a déjà vu, something is repeating itself.” de Jong’s art embodies a macabre humor, like the 20th century artists Georges Grosz and James Ensor, that precisely satirizes the zeitgeist.

For his inaugural exhibition at Marc Straus, “Tumbler”, de Jong obliquely critiques on political play and power structures, and for de Jong, all high-stakes negotiations take place in the company of whiskey. In his new tableau, the whiskey bottle, carafe, ice, and the crystal tumblers – all handmade sculptures – denotes the watershed where the future is determined. With a toast and a stiff drink in hand, fates are decided, lines are drawn. The ice cubes perhaps suggest a game of dice where chance and luck favor fortunes. A nation will invade the other. A hostile corporate takeover. A manager determines with whom a boxer should fight. Advisors of the president have a say in how his wife should behave.

For the show, de Jong includes two new major sculptures of the iconic personalities, “The Boxer” and “The Ventriloquist”. One might think of Mohammed Ali and Jackie Kennedy respectively, who had their meteoric rise to fame occur during a similar period, just like how they were both inextricably part of a larger, complex political game.

In “The Boxer”, sculpted mostly in the material for which de Jong became known: industrial Styrofoam and polyurethane insulation foams, a warrior stands alone in his fight. More than a boxer, Mohammad Ali was an activist and a major civil rights figure. When he willingly relinquished his title as heavyweight champion of the world, he was largely scorned, only to have his heroism widely embraced over the next decades – he remains a symbol of strength and success over adversities, a modern Hercules.

It was the media that framed much of the public’s perception of Jackie Kennedy, as the First Lady and international fashion icon. Through her captivating image, the media had the power to sway cultural ideas and influence change. In his sculpture, “The Ventriloquist”, de Jong features Jackie holding a ventriloquist’s doll with a face just like her own. Who is the real Jackie O and is she in control here? de Jong upends the idea of power and image. As with Ali over the decades the image and understanding of Jackie would be humanized.

Finally, the two unique screen prints were created in response to pamphlet flyers de Jong found in his mail. Here astrology mediums Mr. Moussa and Professor Baba offer their mystical services to cure all kinds of ailments, if one so chooses to believe. Could the healing abilities of these hack clairvoyants be as dubious as the global-altering bills passed in political offices?