Fred Tomaselli – Early Work or How I Became a Painter 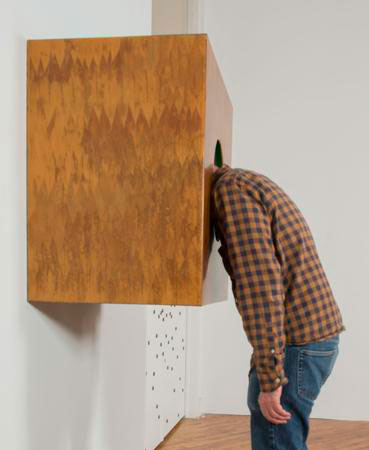 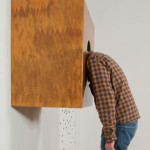 James Cohan is pleased to announce an exhibition by Fred Tomaselli entitled “Early Work or How I Became a Painter”, the artist’s fifth solo presentation at the gallery. The exhibition features two immersive and four interactive artworks made between 1984 and 1990 and a group of mixed-media paintings and works on paper from the 1990s. Many of these works have not been shown in New York since the 1990s, and in some cases, not since the 1980s.

According to Tomaselli, something unexpected happened soon after graduating from Cal State Fullerton with a degree in painting and drawing: he had a crisis of faith. Racked with doubt about the relevance of the medium and troubled by its commodity status, he decided to quit painting altogether. After moving to downtown Los Angeles in 1982, Tomaselli began creating performative installations, a direction he continued after moving to Brooklyn in 1985. These immersive environments, made of low-cost, commercially available products, were created to deliver an escapist experience to the viewer while simultaneously commenting on the mechanics of that experience.

The earliest installation included in this exhibition is “Current Theory” (1984). Tomaselli describes building “an ocean of Styrofoam cups, with each cup tethered to the floor by a foot-long piece of thread. I aimed electric fans at the cups, which blew back and forth in small, pendulous arcs… It was one of my first forays in the idea of art as immersive reality.” An acknowledged influence of the California Light and Space movement is evident in this homespun work, as well as in other works on view such as “Geology Lesson” (1986), a viewer-activated contraption comprised of a grid of speakers, kitty litter, and a San Pedro cactus; and “Cubic Sky” (1988), an installation of suspended cubes depicting the night sky, which Tomaselli describes as a “winking attempt to containerize the universe.”

Despite having left painting behind in the previous decade, the processes of assemblage and accumulation in his installations eventually brought Tomaselli back to his two-dimensional roots. By 1990, he had built the foundation for the resin-based works for which he is most well-known, using pharmaceuticals and hemp leaves to form the underlying abstract compositions. This exhibition traces the development of Tomaselli’s earliest attempts at shifting levels of consciousness first with installation works – which are experienced with the whole body – followed by the two-dimensional resin works – which are experienced visually. The embedded drugs no longer reach the brain through the bloodstream and must take a different route to altering perception. Instead, they travel to the brain through the eyes.

An earlier version of this exhibition was organized by Mike McGee at the Nicholas and Lee Begovich Gallery at California State University, Fullerton from September 12 – December 12, 2015, and was accompanied by a book, “Early Work or How I Became A Painter”, published by the California State University, Fullerton, Grand Central Press, with a foreword and essay by Mike McGee, and essays by art critic Gregory Volk and Bill Arning, director of the Contemporary Arts Museum in Houston. The publication is available for sale at the gallery.

Fred Tomaselli (born 1956, Santa Monica, CA) has been included in international biennial exhibitions including the Biennale of Sydney (2010); Prospect 1 New Orleans (2008); Site Santa Fe (2004); Whitney Biennial (2004) and others. Solo exhibitions include the Modern Art Museum of Fort Worth (2014); a survey exhibition at Aspen Art Museum (2009) that toured to the Tang and Brooklyn Museums (2010); The Fruitmarket Gallery, Edinburgh (2004) toured to four venues in Europe and the US; Albright-Knox Gallery of Art (2003); Site Santa Fe (2001); Palm Beach ICA (2001), and Whitney Museum of American Art (1999). Tomaselli’s work can be found in the public collections of institutions such as the Museum of Modern Art; the Whitney Museum of American Art; the Brooklyn Museum; the Metropolitan Museum of Art, (all New York); the Albright-Knox Gallery, Buffalo; and the Museum of Contemporary Art, Los Angeles.