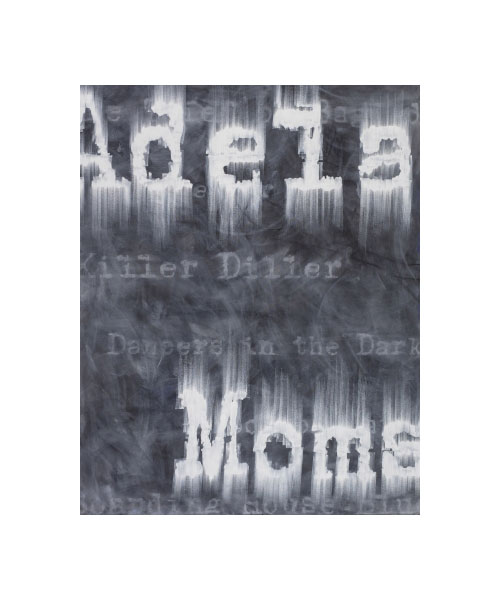 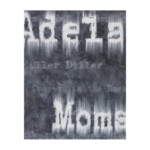 Regen Projects is pleased to announce an exhibition of new work by Los Angeles-based artist Gary Simmons. This marks the artist’s second solo presentation at the gallery.

For nearly three decades, Simmons has developed a singular artistic practice that encompasses painting, drawing, installation, and sculpture. Through these mediums he has created profound works that deal with history, memory, culture, sport, politics, class, and race. Perhaps best known for his signature ‘erasure’ technique in which words and images are rendered in semi abstracted, smudged gestures, Simmons’ work asks the viewer to question their original context while elevating them to iconic status.

The exhibition signals a return to the painterly and features a series of billboard-sized canvases that depict the names of silent and early ‘talkie’ film titles along with the names of their African-American stars. Rendered in oneiric hues of black, grey, and white, the surfaces of the works are slowly built up over time and wiped clean to create intricate layers of depth. Functioning like movie theatre screens along the gallery walls, the works reference the history of cinema and black cultural production. The content of the works hover between abstraction and representation, depicting film titles that appear as if they are fading into obscurity while the names of the stars seemingly float to the surface of the picture plane. Returning to figurative elements used early on in his career, Simmons has rendered hauntingly faint, barely visible outlines of ghostly crows in some of the paintings, signifying the racially charged cartoon characters of Heckle and Jeckle. Their simultaneous presence and absence within the works connotes the violence associated with erasing a disturbing or painful cultural memory while still having them identifiable for posterity.

Evoking American history’s dark past, namely the Jim Crow laws that enforced racial segregation, a large sculptural staircase floating along a wall leads to nowhere and depicts the words ‘Colored Only,’ a reference to the relegated entrances that African Americans were forced to use in order to access the balcony sections of movie theatres where they were permitted to view the films. Providing a visual manifestation of the exhibition’s title, “Balcony Seating Only”, this sculpture, along with the paintings and drawings on view, confronts the viewer with historical references of the black experience and the injustices of our Nation’s past.

Gary Simmons was born in 1964 in New York City. Simmons earned a B.F.A. at the School of Visual Arts in New York and an M.F.A. at the California Institute of the Arts in Valencia. He lives and works in Los Angeles.

He has been the recipient of multiple awards, including the Studio Museum in Harlem Joyce Alexander Wein Prize (2013); George Gund Foundation USA Gund Fellowship (2007); and the National Endowment for the Arts Interarts Grant (1990).