Genevieve Cohn – Drawing Down the Moon 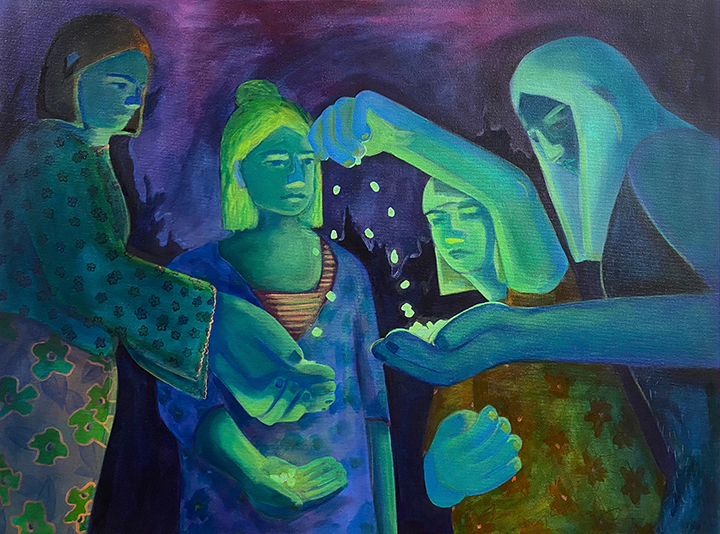 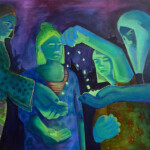 Monya Rowe Gallery is excited to announce the first New York solo exhibition of paintings by Genevieve Cohn titled “Drawing Down the Moon”.

The concept for the exhibition stemmed from an interest in the ancient Celtic Samhain Festivals of Ireland and other ritualistic traditions. It was believed that the festival marked when the boundary between this world and the Otherworld thinned and spirits and magic could more easily intersect. The festival also marks the seasonal transition from fall to winter. The works on view aren’t a direct lineage from this festival or the traditions, but rather an exploration in the ways that the paintings could occupy a similar space. They are suspended somewhere in the in-between; between the real and the imagined. As the artist says: “I am interested in the way that rituals create something physical and tangible to try to access something beyond our threshold for understanding.”

In this series of work, Cohn depicts constructions of imagined traditions that signify the change of season. Exploring how shared practices can create meaning, Cohn’s communities of women collaborate together by collecting stones, building structures and assembling fences. Cohn’s brilliantly hued fluorescent palette transcends realism and lends itself to artificial elements evoking Magical Realism. Part of Cohn’s vision lies in an ongoing interest in pattern. The protagonists are often sartorially clad in stripes, polka dots and florals, at times merging with a hallucinatory landscape.

Inspiration for the paintings is also rooted in the Women’s Land Army (a British civilian organization created in 1917 during WWI so women could work in agriculture), the history and imagery of witches and witchcraft (both in the magical and historical context), and literary fiction.

Genevieve Cohn (b. 1992, Burlington, Vermont) received a MFA from Indiana University, Bloomington, IN and a BA from Ithaca College, Ithaca, NY. Cohn has completed two residencies at Vermont Studio Center, Johnson, VT. Her work has recently been exhibited at Mindy Solomon Gallery, Miami; Monya Rowe Gallery, NY; and online at David Zwirner Platform. The artist lives and works in Boston, MA. This is her first solo exhibition at Monya Rowe Gallery and in New York.