Geta Brătescu – The Leaps of Aesop 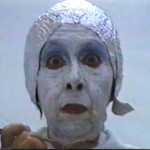 ‘Geta Brătescu. The Leaps of Aesop’ is the first New York solo presentation devoted to the 91 year-old forerunner in the field of Romanian Conceptualism. Her diverse oeuvre – comprising drawing, collage, engraving, textiles, and photography, as well as experimental film, video, and performance – mines themes of identity, gender, and dematerialization, often drawing from the stories of literary figures and addressing the symbiotic relationship between art making and working environments. Aesop, the ancient Greek fabulist, serves as a point of departure for this exhibition, which features more than fifty works that span Brătescu’s career. In many ways a fitting avatar for Brătescu, Aesop manifests in the works on view as a symbol of antic irreverence, mocking authority and status. A spirited believer in the role of the artist as that of a disruptor, Brătescu has championed ideas of play and disorder throughout her vibrant practice, remarking, ‘there is much economy and at the same time rebellion in the creation of expression.’

The Leaps of Aesop’ is conceived in collaboration with Magda Radu, curator and art historian based in Bucharest, Romania. She curated ‘Apparitions,’ Brătescu’s exhibition for the Romanian Pavilion at La Biennale di Venezia 2017. Special thanks to Marian Ivan and Diana Ursan of Ivan Gallery for their support and contribution to this exhibition.

Magda Radu on ‘Geta Brătescu. The Leaps of Aesop’
The exhibition ‘The Leaps of Aesop’ tracks the many implications generated by Aesop, the writer of the ancient fables, who, in Geta Brătescu’s system of thinking, becomes a playful and mischievous character and can be regarded as a metaphor for the condition of the artist. Right after the fall of the Communist regime in Romania, Geta Brătescu declared Aesop a symbol of ‘everything that stood against totalitarianism.’ But Aesop, like Medea, is a sign encompassing so many overlapping meanings that his literary embodiment is transcended and endlessly modulated in the artist’s practice. Aesop is, above all, an agent of freedom, the entity responsible for sparking the creative process in the studio. His leaps are so many movements of the mind, while his undisciplined nature channels the creative energy in countless directions. Aesop is a catalyst of ideas, rejecting the barriers between genres. His characteristic irreverence constitutes the ferment that pushes the artist to experiment in a plethora of forms of expression: drawing, collage, object, printing techniques, experimental film, performance, and animation.

Regarding his literary personality, Aesop is a relative of Păcală (‘Joker’ or ‘Trickster’), a character from Romanian folktales, who could be read in a subversive key as a parable of the way the weak and marginal confront the powerful by means of humor, courage, and cunning. This thread extends to another vernacular hero of Middle Eastern popular culture, Nasreddin Hodja, a follower of Aesop, carrying the latter’s ‘last breath,’ whose tales are rendered by Geta Brătescu in whimsical visual narratives. The same spirit precipitates the conjuring of characters like Charlot or Eugène Ionesco disguised as a clown; both are referenced in her writings, adding to the rich genealogy of jesters and fools telling uncomfortable truths to power. The artist is, after all, ‘tragicomic in her Chaplinesque destiny,’ a figure that can switch and accumulate identities, a theatrical creature playfully fashioning her many personae. Sometimes the studio itself becomes a theater stage and the objects within turn into characters that acquire parts in invented scenarios.

Extending the idea of playfulness, Brătescu is fascinated by the disruptive potential of magnets, as illustrated in her landmark piece, ‘Magnets in the City’ (1974), a photomontage with an accompanying text describing the ways in which magnets of various sizes, placed outside and within the city limits, unleash their hazardous energies, generating chaos while simultaneously reminding people of their own volition and power to act. In the same vein, the final segment of film, ‘The Studio,’ stages a Dada-like revolt, in which the artist employs various surrounding objects in a madcap, ritualized performance.

A more somber extrapolation of the state of febrile agitation may be linked to the concept of disorder, made explicit in another significant work, ‘Anti-Faust,’ an installation of almost formless drawings, developed as an antithesis to the conceptual and technical rigor of the Faust series, turning the visual interpretation of a literary masterpiece into an uncanny meditation on the self. Finally, the dimension of play and unbound formal inventiveness drives Brătescu’s recent ‘Game of Forms” series: each sheet of paper is like a field of competing energies, a theatrical or dance stage, where the profusion of shapes cut out with scissors enact condensed and abstracted versions of the Aesopian plays.

A displacement of the narrative towards sheer seriality and process also appears in her ‘Drawings with the Eyes Closed’ series, which often emphasize the tension between the outside world and the inner flux of the mind that exteriorizes itself through drawing. The artist once declared that she starts these drawings ‘in/with a completely negative attitude towards expression.’ But this continuum does not go on uninterrupted, unhampered by the intrusion of memory, of some ‘mental motif,’ and she is well aware of that: ‘To draw with the eyes closed means on the one hand to invite chance, and on the other, to challenge it. It is precisely this double relation to the haphazard that reinforces the playful nature of this experience.’ Geta Brătescu incorporates in her ‘automatic’ drawings the emergence of forms, as the hand strives to record what gradually comes to mind, in a movement that cannot and will not let go of its creative impetus. This process is not devoid of its moments of impasse. Her video, ‘Cocktail Automatic’ (1993), captures the anxiety of the artistic process, marked by lapses, pointless repetitions, and failed attempts at beginning something.