Geta Brătescu – The Power of the Line 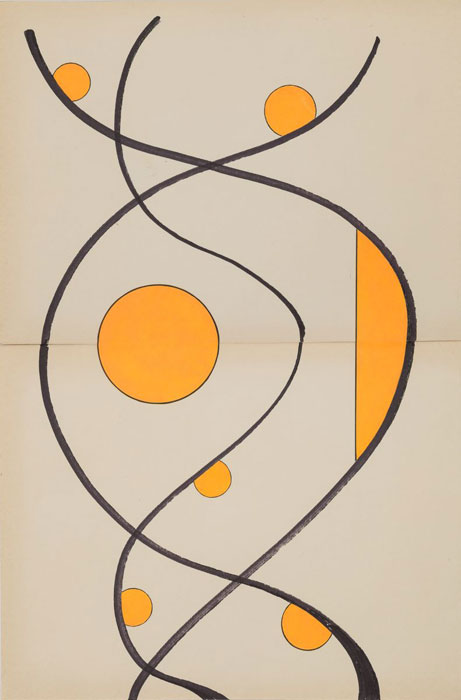 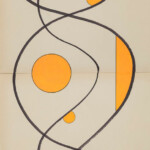 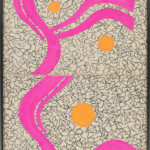 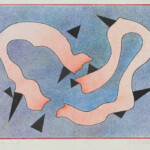 Hauser & Wirth is proud to present ‘Geta Brătescu. The Power of the Line’. The exhibition features an important body of works from the past decade, during which time Brătescu focused predominantly on working with the line as a structuring principle. The exhibition was conceived over the last year in conjunction with the artist and in close collaboration with Marian Ivan and Diana Ursan of Ivan Gallery. For the duration of the exhibition, two film works will be screened in the centre of the gallery space giving insights into the immersive creative process of this remarkable artist.

Brătescu originally studied at the Academy of Fine Arts, Bucharest, in the late 1940s but was expelled due to the Communist party’s objection to her parents’ middle class background. Over the course of a seven-decade career she went on to develop a deeply personal practice and was one of the first representatives of conceptualist approaches in Romania. Brătescu’s oeuvre comprises drawing, collage, textiles, photography, experimental film and performance which mines themes of identity, gender, and dematerialisation. Her more recent international recognition, including her Venice Biennale presentation in 2017, provided a basis for the re-evaluation of her experimental work within the framework of conceptual practices.

The carefully selected body of works in the exhibition render the different means in which Brătescu engaged the primordial unit of the line – in curved, hard-edged, contained or spread compositions. For Brătescu, the line is manifest in the movement of the artist’s hand in space as it handles the pencil, the marker or the scissors, creating a flow of shapes, forms and sometimes even silhouettes. By turns playful and purposeful, Brătescu’s inexhaustible creativity runs as a common thread throughout the exhibition and can be seen in the vibrant proliferation of ideas in the artist’s notebook ‘Carnet’ (2014) and ‘Linia’ (The Line) (2014), a series of drawings on post-it notes. Brătescu’s experiments with colour and line are developed further in ‘Untitled (The Line – Game of Forms)’ (2013), an extraordinary 35-part work that combines abstract and representational elements, described by the artist as traces of her memories and experiences.

Brătescu’s approach to materials evolved from an attitude towards her studio as both a physical and psychological space, a safe environment of enclosure as well as a stage for creative invention. Her freedom paradoxically emerged from this contained space of the studio: the freedom to be able to continue ‘drawing with scissors’ and exploring the new ideas that came to her every day. These ideas were generated by the texture of the paper, for example, and by the simple, everyday materials and objects which surrounded her. She frequently used these lo-fi, inexpensive elements as a point of departure and an intimate aesthetic emerges in the works which incorporate torn paper, coffee sticks, and match boxes, such as ‘Untitled (Fără titlu)’ (2013).

The films which feature in the exhibition, ‘Linia (The Line)’ (2014) and ‘The Gesture, The Drawing’ (2018) – the latter a collaboration with the artist Stefan Sava – reveal the inextricable link between Brătescu’s studio space and the creative process which can be likened to an act of performance, regardless of the medium. As Brătescu explained, ‘No matter what tool I might use, when I draw and then examine my work, I think that the musicality of the line is in my nature. I liked to dance. When I draw, I can say that my hand dances.’

The exhibition coincides with a book from Hauser & Wirth Publishers entitled ‘Geta Brătescu: Game of Forms’. This new publication features works from this series alongside excerpts from the artist’s diaries dating from 2008 to 2017. Brătescu studied both art and literature, and the duality of writing and drawing was central to her thought process and practice. During her lifetime, Brătescu published a number of books documenting her daily studio activities and personal experiences. ‘Jeu de Formes” is the title, originally in French, that she gave to the cycle of works that was the focus of the last decade of her career, consisting of collages and line drawings.

Brătescu spent much of her working life in Bucharest under the Communist regime. She developed a deeply personal practice concerned with themes of identity, gender and dematerialisation. Her aesthetic – lo-fi, handmade, incorporating inexpensive, everyday materials – evolved from an attitude towards her studio as a safe environment of enclosure as well as a stage for playful invention. Memorialised in a key film, ‘The Studio’, 1978 was a room of her own in which she could create work independently.

In addition to the objects and materials at hand, Brătescu was devoted to literature and would often draw inspiration from the stories of characters in famous texts. Aesop and Medea, Mother Courage and Faust, all played starring roles in her work, functioning as alter-egos and conduits for self-expression and frequently an oblique form of political subversion.

From 1945 to 1949, she studied at the Faculty of Letters and Philosophy at the University of Bucharest and at the Bucharest Academy of Fine Arts. In 1950 her studies were interrupted by the Communist government, and she was unable to complete her art education until 1971. Following her exclusion from university, Brătescu maintained a studio practice whilst working as an illustrator and graphic designer, becoming in the early 1960s the artistic director of the prestigious literary magazine, Secolul 20.

In 2008 Brătescu was honored with the title of Doctor Honoris Causa from the National Arts University in Bucharest for her contribution to the landscape of contemporary Romanian art. In 2017 she represented Romania at the Venice Biennale and was awarded by the President of Romania the Order of the Star of Romania.