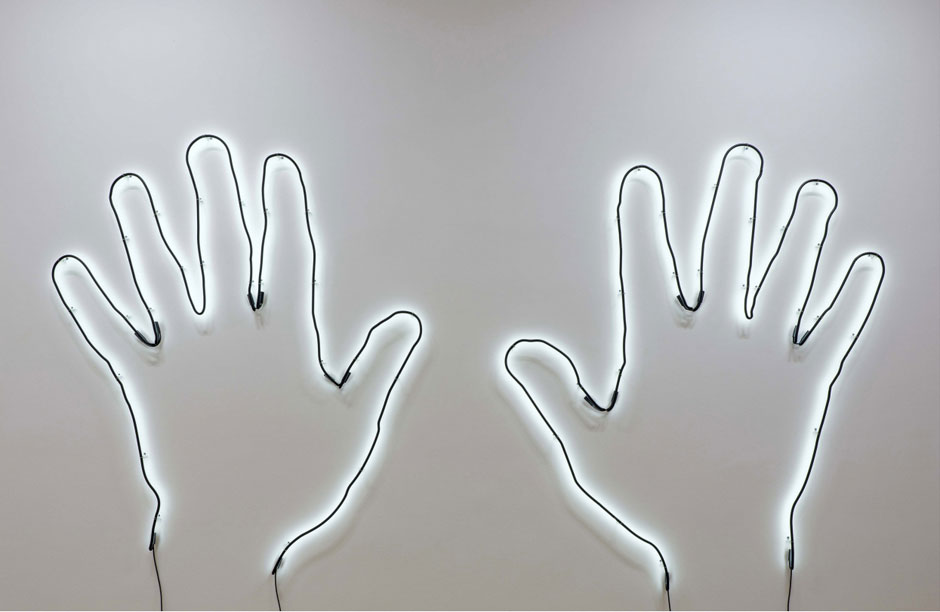 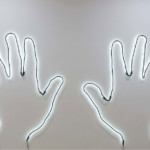 Regen Projects is pleased to announce “Untitled (America)/Debris Field/Synecdoche/Notes for a Poem on the Third World”, an exhibition of new work by Glenn Ligon. For this exhibition, Ligon will present a new series of silkscreen paintings based on abstracted letter forms and several neon installations. This marks the artist’s sixth solo presentation at the gallery.

Titled “Debris Field”, the silkscreen paintings are made using a new process for the artist. Rather than generating from a specific text, Ligon focuses on letter forms, using images of his own etchings and stencil-and-ink drawings to create large silkscreens, which are then printed in black etching ink on red canvases, some with additional passages of hand-stenciling. Each screen is overlapped to create a dense pattern of letter-based shapes, resulting in an improvisatory, cumulative painting technique.

Over the years, Ligon has created neon sculptures that illuminate various phrases or words in charged and animated ways. “Notes for a Poem on the Third World”, Ligon’s first figurative sculpture, is comprised of a large neon based on a tracing of the artist’s hands that takes its inspiration from an unrealized film project by Pier Paolo Pasolini that was to be shot in India, Africa, the Arab countries, Latin America, and the “black ghettoes of the United States.” Pasolini claimed that it was the “discovery of the elsewhere” that drove his identification with the struggles of non-Western peoples and people on the margins of the West. Ligon’s neon, with its ambiguous gesture of greeting, protest, or surrender, is the first of a series of works inspired by Pasolini’s project.

Also featured in the exhibition is “Untitled (America)”, 2018, a black-painted red neon in which the word “America” is displayed upside down, and “Synecdoche (For Byron Kim)”, a neon showing the date of the next presidential election that will be lit on that day.

Glenn Ligon (b. 1960) lives and works in New York. His solo exhibitions include Camden Arts Centre, London (2014-15); Whitney Museum of American Art, New York (2011); The Power Plant, Toronto (2005); The Studio Museum in Harlem, New York (2001); Kunstverein, Munich (2001); Walker Art Center, Minneapolis (2000); and the Institute of Contemporary Art, Philadelphia (1998). His work was included in Documenta XI (2002); in two Whitney Biennials (1991, 1993); and in “All the World’s Futures” at the 56th International Art Exhibition La Biennale di Venezia (2015). Recent curatorial projects include “Blue Black” at the Pulitzer Arts Foundation (2017) and “Encounters and Collisions”, done in collaboration with Nottingham Contemporary and Tate Liverpool (2015).