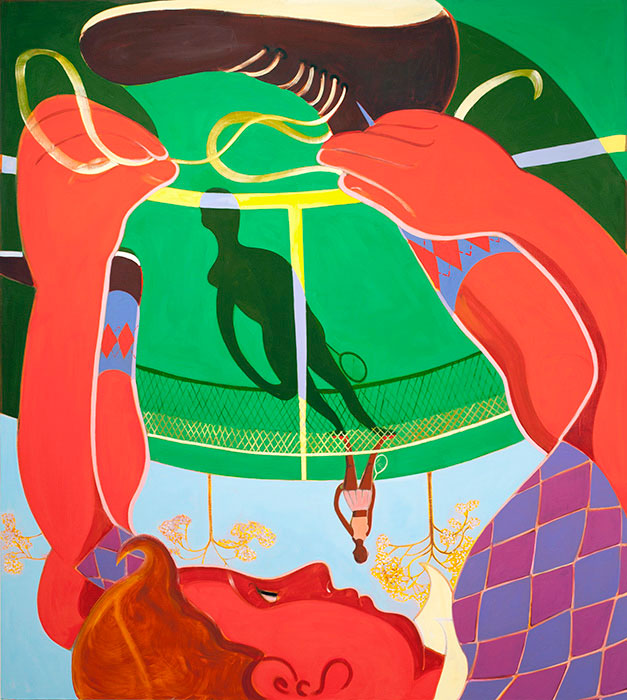 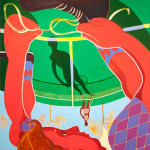 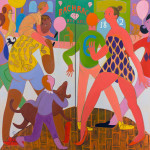 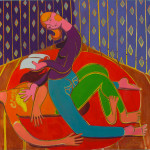 Thierry-Goldberg Gallery is pleased to present the first New York solo exhibition of Grace Weaver. A self-professed fan of guilty pleasure music, Weaver likes to think of her paintings as pop songs. The title of the exhibition is borrowed from Katy Perry’s hit single from 2010, “Teenage Dream”.

In “Match Point” (2015) one of Weaver’s most recent paintings in the exhibition, the vantage point is that of a tennis player taking a moment to bend over and tie his shoelace. A scaled-up male figure with red elongated limbs frames the opposing female player that stands in the distance on the other side of the tennis court. The upside down viewpoint of the pictorial composition contributes to the whimsical aspect of the work, where the difference in scale between the two figures make it seem as if the oversized head of the male character in the foreground is about to kiss (or eat) the miniature female figure in the back.

Weaver’s carefree millennial sensibility is also evident in “Meet-Cute”, a large two-panel painting from 2014. The painting depicts a busy street scene with bursts of bright color and stylized figures, where a high-heeled woman in a purple summer dress greets a man that carries a child on his shoulders. Weaver’s colorful compositions of curved lines and playful usage of scale construct everyday narratives that feel current yet timeless.