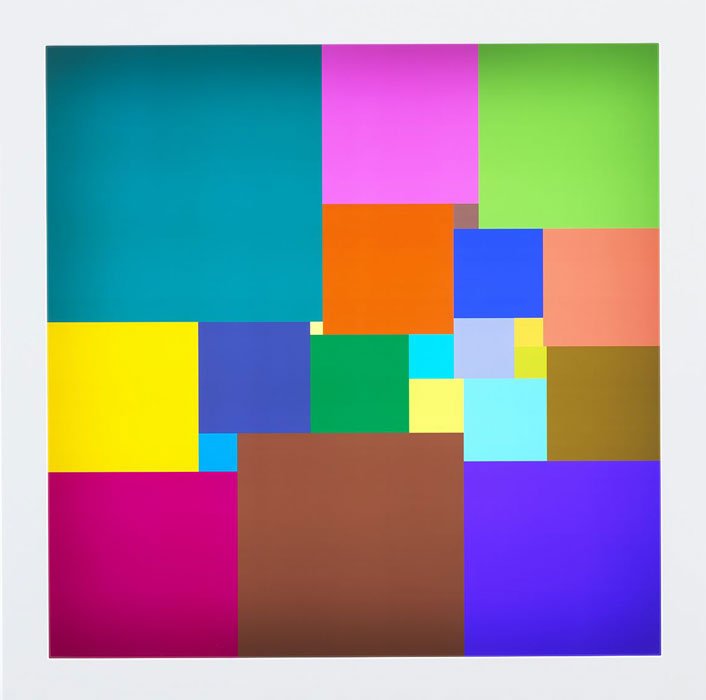 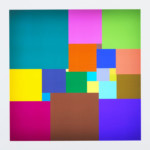 James Cohan Gallery is pleased to present “Grids”, a group exhibition which considers how contemporary artists work within and against the Modernist notion of the grid. As Rosalind Krauss wrote in her seminal 1979 essay of the same name, “the grid announces, among other things, modern art’s will to silence, its hostility to literature, to narrative, to discourse.” The works in this exhibition challenge such absolutism and play with the grid as an organizing principal, a structure, and a pattern. The exhibition brings together artists who work using a diverse range of materials and processes including Michelle Grabner, Elias Sime, Federico Herrero, Spencer Finch, Josiah McElheny, Simon Evans, Scott Olson, Beatriz Milhazes, Yinka Shonibare MBE, Sol LeWitt, Trenton Doyle Hancock and Fred Tomaselli.

Central to this exhibition is a selection of recent work by Michelle Grabner in which the artist employs recognizable textile patterns appropriated from the domestic environment to explore ideas of repetition and process. In her gingham painting “Untitled” (2016), Grabner creates a vibrantly patterned abstraction that celebrates flatness and suggests an infinite seriality while evoking the tedium of domesticity. In her newly exhibited wall reliefs and free-standing sculptures, the humble crochet of a throw blanket is monumentalized in iron and bronze. Like Grabner, Trenton Doyle Hancock considers the grid as it appears in the patterns of the domestic interior. However, Hancock’s “The Den” (2012), which is based on a memory of his grandmother’s tile floor, is defined not by subtle variation but by a dizzying honeycomb pattern of toasty browns, oranges, and yellows. For Hancock, the quatrefoil pattern of this specific domestic interior – rendered on an operatic scale – speaks to the autobiographical impulse of his artistic practice and is woven throughout his body of work.

In works by Spencer Finch and Federico Herrero, the grid provides an initial framework for organizing light and color. Finch’s lightbox “Squared Square (22)” (2018) takes inspiration from the loose color grids of Paul Klee yet adopts a mathematical problem to define the arrangement of these squares of color: the smallest number of squares that can be inscribed within a square. Whereas Finch is interested in organizing color within the structure the grid provides, Herrero’s “Landscape with Pyramids” (2018) demonstrates the artist’s sustained investment in pushing at and transgressing the boundaries imposed by such a framework. Lush, densely pigmented organic forms jostle against each other as they inhabit and negotiate the space of the canvas. Color, for the artist, is both an expression of space and a way to organize the Costa Rican landscape he depicts in his painting.

For Scott Olson and Elias Sime, the grid is a physical as well as compositional element. Olson considers surface and framing as constructs in his work. He often employs a handmade frame around a central painted field that acts as a physical edge to the painting and calls attention to its nature as both an image and an object. The prismatic shards of the painted abstraction seem to unfold and dissolve before the viewer’s eyes, pushing back against the rigid structure set forth to contain them. Elias Sime creates densely-layered collages – of reclaimed electrical wires, outmoded motherboards, and other electronic detritus – that begin their lives as panels arranged in a grid on the floor. Only when the work is completed is the grid reconstituted on the gallery wall. In Sime’s “TIGHTROPE: (10) While Observing …” (2018), the grid of the panels is echoed in the carefully composed pattern of electrical components affixed to them, creating an abstraction suggestive at once of the warp and weft of a tapestry and of a bird’s eye view of a gridlocked urban sprawl.

A deep engagement with the history of modernist aesthetics and ideas is at play in Josiah McElheny‘s “Grey Prism Painting III” (2016). The work references the black paintings of Ad Reinhardt in its three-by-three grid structure of muted black squares, yet McElheny builds up where Reinhardt would subtract. By using glass, which he prizes for both its conceptual and perceptual qualities, McElheny creates a work in which reflection highlights the interactive relationship between object and viewer that Reinhardt would rather renounce. A similar investment in the history of modernism – both European and Latin American – is married to the colors and syncopations of Beatriz Milhazes‘s native Brazil in “Mariorola” (2015). Circular forms are set against swelling waves and parallel lines to create an image that echoes both the lush tropical vegetation of Brazil and the grid-like transparencies of its modernist architecture.