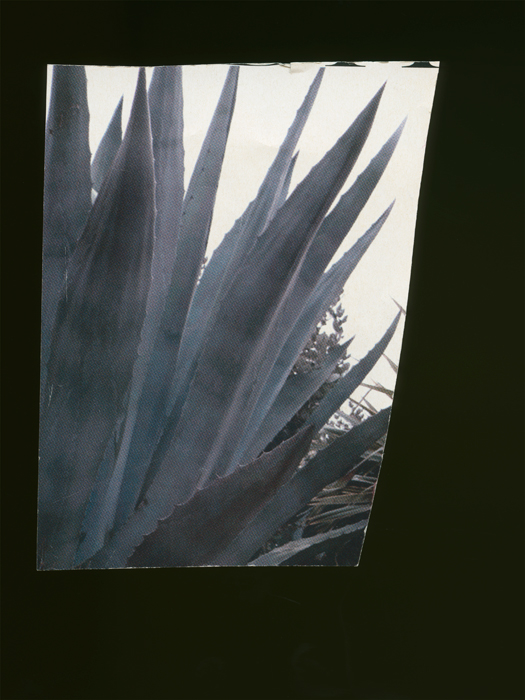 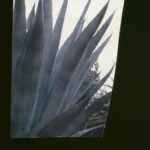 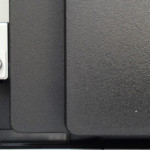 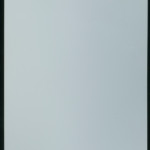 For her first solo show in over seven years, Basel-based artist Hagar Schmidhalter presents a new body of work consisting of nine scanner photographs from her “Colours Series”, two scanner videos and some glass works. The installation was specifically conceived for the converted double-garage space at SALTS, which lead the artist to adapt the architectural features of the space to facilitate the reading of the work. By inserting a window facing the garden and creating a second doorway inside the space, the exhibition room becomes flooded with natural light and opens a dialogue between the monochrome C-prints and the lush green garden outdoors.

Schmidhalter works with the photographic medium in two very distinct manners. On one hand, as an archivist, by appropriating found print material and photos which are later combined and layered in order to create new combinations and readings; on the other hand, she works with readily available photographic processes, whereas the automatised act of taking a snapshot, or scanning an image is questioned, or when the purpose of recording data with a common low-fi equipment becomes an exploration during which accurate imaging is replaced by material creativity.

“Fuji Colour Garden” explores the immediacy, with which the artist creates sublime and tactile images by simply interweaving different forms of photographic tools. In concrete terms, the artist first sandwiches unexposed analog photographic paper between sheets of coloured filter and a scanner bed, then exposes the paper by letting the scanner run, allowing for an arbitrary result. The automatically processed images are finally enlarged to C-print printed on Fuji Paper. The monochromatic palette is something that grew out of a more organic series of works, such as the fingerprint photos taken with her mobile phone, or the fleshy, out of focus close-ups of her skin, which inspired Schmidhalter’s later colour studies.

The aforementioned colour studies gave its title to Schmidhalter’s exhibition “Fuji Colour Garden”, a reference to the famous Kawachi Fuji Gardens in Kitakyushu, Japan, a private garden founded in 1977 and home to about 150 Wisteria flowering plants. Every year in late April, when in full blossom, the garden offers a spectacular experience of pastel-coloured, fairy tale-like tunnels of flowers, and so colourful and graceful that they appear nothing short of (un)real. Printed in large-scale and mounted on glass sheets leaning against the walls of the gallery.

Schmidhalter’s work appear as darker and fleshier. It nevertheless evokes a more subtle, self-relective, yet powerful monochromatic image, that instead of playing at the awe effect of the spectator, invites to dialogue. This strong interest in layering various analog and digital elements resurfaces cleary in the exhibition itself, between the wall, the glass, the print and finally the light that shines on them. In turn, this helps Schmidhalter to visualise a process of (on)looking that that often remains impalpable. The scanner videos, in their own right, visualize the technological process of capturing and recording the very image that we stand in front of, more so, the prints, hanging on large panels of glass give a sense of floating.

This exhibition was generously supported by Swisslos-Fonds Basel-Stadt.

We would like to thank Swisslos Basel-Landschaft, Fondation Nestlé pour l’Art, Pro Helvetia & Stiftung Roldenfund for their generous support.