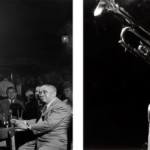 New York City in the fall. The scorching summer heat fades, leaves start changing to buttery yellows and burgundy reds, and the sound of a saxophone player in a Central Park archway sounds like a romantic lullaby taking us back to another time, an older New York. In this sense, the photographs of Herman Leonard are a twofold experience as well, giving viewers an intimate encounter with some of rhythm and blues greats, while conjuring the intense sensation of sound and atmosphere. Robert Mann Gallery is pleased to present “Herman Leonard: The Rhythm of Old New York”, a symphonic collection of the artist’s iconic images of New York jazz that capture, in velvet tones and poetic compositions, the coolest cats in town.

Considered one of the most prominent jazz photographers, Herman Leonard was born the son of Romanian immigrants in Allentown, Pennsylvania. After witnessing an image being developed in his brother’s darkroom at the young age of nine, Leonard became enthralled with the magic of photography. In 1947, he graduated from Ohio University with bachelor of fine arts in photography, after which he spent a year as an apprentice to master Canadian portrait photographer, Yousuf Karsh. Later assignments would take him to East Asia, where in the 1950s he served as Marlon Brando’s personal photographer, and Paris, where he worked as a correspondent for Playboy and Time magazines.

Leonard’s most enduring pursuit was quintessentially American: jazz. It was this passion for music that led him to establish a studio in the heart of Greenwich Village in 1949. He ventured to the swinging clubs of Broadway, 52nd Street and Harlem. While shooting at The Royal Roost, Birdland, and Bop City, he photographed and developed friendships with some of the legends of jazz history, including Charlie Parker, Sarah Vaughan, Dizzy Gillespie, Billie Holiday, Chet Baker, and many more. Making use of techniques like backlighting to set his subjects apart from the background, Leonard gracefully captured a world of shadow, dark interiors, gleaming microphones, and feathery wisps of cigarette smoke that dance to the beat, while captivating viewers in the energy and emotion of the moment.

Leonard’s works are found in numerous public collections including the Smithsonian Institute, Lincoln Center, and the George Eastman House, as well as the private collections of Sir Elton John, Bruce Bernard, and President Bill Clinton. While his New Orleans studio and at least 8,000 original prints were destroyed in 2005 by Hurricane Katrina, his complete collection of over 35,000 negatives survived and have been fully archived through a grant from the Grammy Foundation. Through this, the timeless photographs of Herman Leonard forever hold the spirit of the dark ambient tones of New York jazz clubs and the icons that played them.