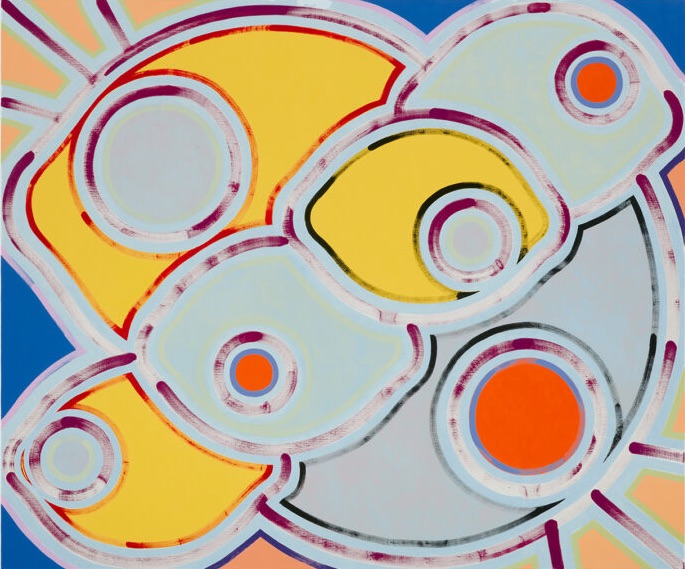 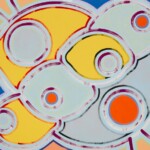 Klaus von Nichtssagend Gallery is very pleased to open its 2022 season with a show of new works by Holly Coulis. Coulis’s fourth solo show with the gallery will include oil paintings on linen and painted sculptural works.

In her newest paintings, Holly Coulis has further expanded her approach to picture-making. The artist has consistently grounded abstraction in the still life genre, populating her canvases with traditional subjects such as fruit, vessels, or kitchen items arranged on table tops. In the newest works these familiar forms have broken from their stillness entirely. Brushstrokes fly around the canvas in wholly animated movements of texture, color, and line. Space is pushed sideways and collapsed in on itself as relationships between tones weave in and out of foreground and background, creating a dynamic visual puzzle.

Coulis’s abstraction of form in these paintings departs even further from her past representations of still life motifs. Lemon shapes repeat and overlap bathed in chromatic oil paint, while circles suggest oranges in colors from blues to scarlets to greens. In some paintings, the only hint of representation is a blunted point at the end of a yellow oblong form, loosely indicating a citrus fruit. Soft fields of brushy color seem to flatten the masses of objects as Coulis layers shapes on top of each other, creating near-repeating patterns that travel diagonally across the picture plane.

A new trio of sculptures accompany the paintings in this show. Building on her past explorations of two-dimensionality expressed three-dimensionally, these shaped wooden constructions employ color to describe or subvert the appearance of bouquets, hourglasses or vessels. Their bases could be fruit stands or mountainous landscapes, their rounded caps are perhaps balloons, flowers, or signs. The forms themselves seem to describe a new representation entirely: something more akin to a feeling than an object.

Holly Coulis (b. 1968, Toronto, Ontario) lives and works in Athens, Georgia. She holds an MFA from the School of the Museum of Fine Arts, Boston, and a BFA from the Ontario College of Art and Design in Toronto. Her work has been reviewed in the New York Times, Los Angeles Times, the New Yorker, Artforum, Art in America, Brooklyn Rail, and Hyperallergic among others. The Blanton Museum of Art in Texas and Nerman Museum of Contemporary Art in Kansas include Holly Coulis’s work in their collections.

Visitors must wear masks while visiting the gallery. Advance appointments are encouraged but not required.