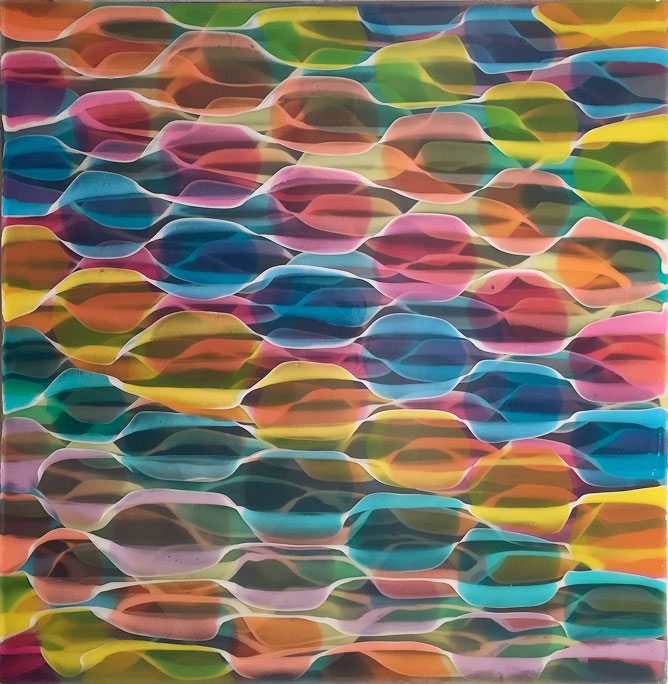 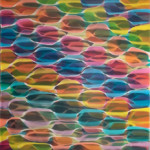 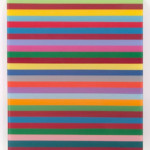 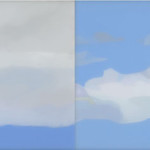 Margaret Thatcher Projects is proud to present the group exhibition “Hoping for Clear Skies”, inspired by Thomas Hardy’s sonnet “At a Lunar Eclipse”. The exhibition will include works by six female artists Jaq Belcher, Lula Mae Blocton, Maureen McQuillan, Maria Park, Heidi Spector and Heidi van Wieren. Each artist’s work reflects aspects of Hardy’s sonnet; a simple observation of life, the tone of questionable dismay at the trivia of life, the conviction that mankind is not less, but infinitely more, and the Sonnet’s humanist tones of worth, wonder and warmth. Through the work, practice and process of these six artists, “Hoping for Clear Skies” explores the multifaceted and multilayered possibilities of navigating through an ever-changing landscape.

Korean-American artist Maria Park constructs her images by stenciling and layering district shapes of color, evoking the crisp, flattened characteristics of screen graphics. The series in the exhibition titled “Sight Plan 1-7” refers to the experience of traveling through San Francisco, whose topography often brings surprising vistas of sky into the city as though one’s focus were elevated above the horizon line. The title also suggests an idea of keeping focus above the immediate fray of life. “Sight Plan” is a 150-foot mural commissioned through the San Francisco Arts Commission.

Inherent in Heidi van Wieren‘s work is her Dutch immigrant background of growing up on the shores of Lake Michigan that emulates a small town in the Netherlands. The exposure to richly patterned Delft palette and aesthetic permeates in van Wieren’s paintings that are made by overlaying Elmer’s glue and multiple pigment colors. The playful droplets of ink are sprinkled like rain across the surface fading in and out of the painting’s foreground. Through her work van Wieren creates planes of depth where mediums intermingle to shape dreamy celestial landscapes and methodically linear forms.

Influenced by popular music, Canadian artist Heidi Spector‘s works are composed of liquitex acrylic painted as bands of color on Russian birch. The works are then are topped with resin, creating a surface where candy-like colors pulse and dance together. The color palette of each painting is in part a response to a song, infusing the group of works with the sensation of being an audio/visual playlist. While emotional context is illusive in her works, the vibration of colors is evocative of self-reference in themes of musical rhythm, club life from era past and techno beats.

Australian born, New York based artist Jaq Belcher cuts into bright white paper, manipulating light and shadow organized into patterns that evoke natural phenomena in shape and form. The cuts made to create her repeated forms, and the time it took to make them, are then carefully notated along the bottom of each drawing. The focus on reduction and repetition require a focused stillness and, for Belcher, are a testament to the practice of being completely present in the moment.

As an African-American woman artist, Lula Mae Blocton traces her heritage to slaves on an Alabama plantation and includes parts of her ancestry in her artwork in a nonrepresentational manner using the power of light, color and structure. By purposefully choosing to layer authentic African patterns, Blocton creates a contrast between geometric and curvilinear shapes.

Scientific and technological systems often inform the underlying logic of Maureen McQuillan‘s work. Previously, McQuillan explored the infinite possibilities of line in black-and-white. In her newest series, McQuillan experiments with the dramatic effect of technology on the perception of color. Color is less drawn from nature and has become device-specific. While theoretically various digital color display systems can create millions of combinations, they are still just approximations to the true range of natural color. For McQuillan, color remains highly subjective and even metaphysical as well as deeply emotional and seductive.

“Thy shadow, Earth, from Pole to Central Sea,
Now steals along upon the Moon’s meek shine
In even monochrome and curving line
Of imperturbable serenity.

How shall I link such sun-cast symmetry
With the torn troubled form I know as thine,
That profile, placid as a brow divine,
With continents of moil and misery?

And can immense Mortality but throw
So small a shade, and Heaven’s high human scheme
Be hemmed within the coasts yon arc implies?

Is such the stellar gauge of earthly show,
Nation at war with nation, brains that teem,
Heroes, and women fairer than the skies?”