Hunter Reynolds – From Drag to Dervish 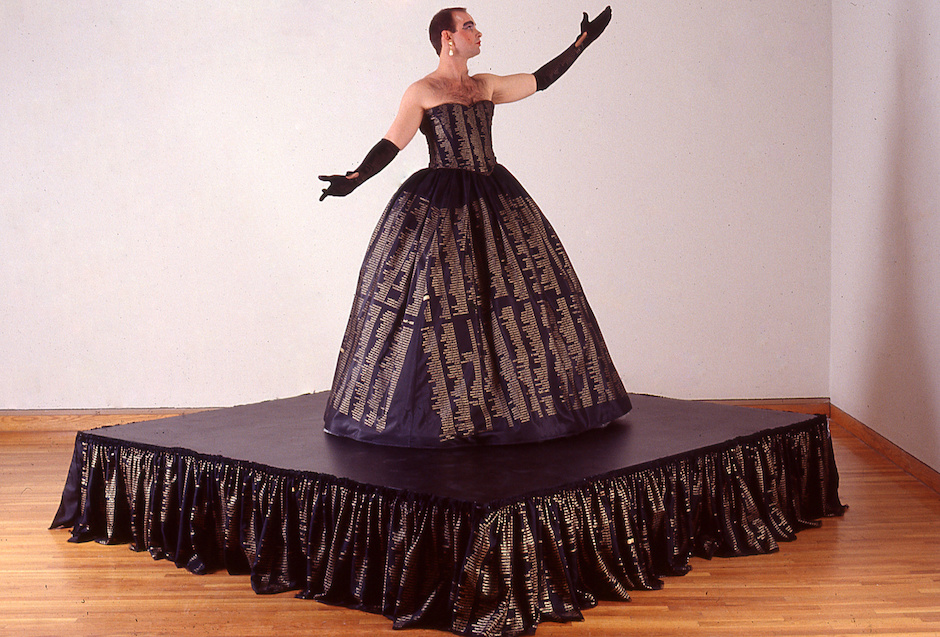 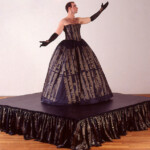 P·P·O·W is pleased to present “From Drag to Dervish”, an exhibition chronicling the life of Hunter Reynolds’ alter-ego Patina du Prey through historic installations, sculptural gowns, photographs, and performance documentation. An activist, muse, and healer, du Prey performed throughout the United States, Western Europe and Canada during the AIDS crisis. Whether worn on the artist’s body or presented on a male-form mannequin, du Prey’s series of rotating, suspended or sunken dress-sculptures embody a dual-gendered spirit.

Reynolds’ public exploration of gender and persona was influenced by the East Village drag scene of the mid-1980s and nights spent at the Pyramid Club. This project formally debuted with “Drag” at Simon Watson Gallery in 1990. As documented in archival footage, that exhibition centered on the portrait series “Drag Pose”, photographed by Michael Wakefield, and Reynolds’ ritual transformation into du Prey. Seated before “The Vanity” (1989), Reynolds publicly made himself up, donned a dark blue taffeta dress and entered the “Drag Pose Cage” (1990), where a temporarily corporeal du Prey would vogue, lounge, or speak to viewers as part of a daily endurance performance.

For the first time ever, “From Drag to Dervish” will display together “The Banquet Dress” (1992), “Love Dress” (1994), “Mourning Dress” (1997), and “The Memorial Dress” (1993-1997) – a revolving monument bearing the names of 25,000 people known to have died of AIDS-related illnesses. The exhibition will also present historic collaborations including video documentation of “The Banquet” (1992), a collaboration with Chrysanne Stathacos presented at Thread Waxing Space, and “I-DEA: The Goddess Within” (1993-2000), photographs by Maxine Henryson which depict du Prey performing healing dances and radiating love in her Dervish Dress.

Throughout the 1990s, du Prey exhibited at Andrea Rosen Gallery and Stux Gallery, New York; Galeria Dziekanka, Warsaw; Espace Dieu, Paris; and Trinitatiskirche, Köln. She led Soho Art Walks, crashed the opening of the 1993 Whitney Biennial, and served as the “Mistress of Queer affairs” at The O-Party, a political convention organized by Zini Lardieri at the New Museum in 1992. In her rousing speech, which will be presented in archival footage, du Prey declaimed, “It is our responsibility to ensure change and preserve the freedom to be Other.”

Through formal performances, guerilla actions, and collaborative projects, du Prey’s art and ideology continue to personify progressive social values informed by systemic oppression, internalized phobias, and the transformative power of beauty. In his catalog essay for “Drag”, Gregg Bordowitz speaks to the enduring relevance of Reynolds’ project. He writes, “This show renders open the possibility for all viewers to do work against compulsory heterosexuality. It provides the opportunity for viewers to divest interests in the present order of sexuality and it invites us to take some new risks.”

“From Drag to Dervish” will be accompanied by a full-color exhibition guide with essays by Jane Ursula Harris and Gregg Bordowitz.

Hunter Reynolds (b. 1959; Rochester, MN) was an early member of ACT UP and in 1989 co-founded Art Positive, an affinity group of ACT UP that fought homophobia and censorship in the arts. He has presented solo exhibitions at Hallwalls, Buffalo, NY; White Columns, New York, NY; Artist Space, New York, NY; Participant Inc., New York, NY; Yerba Buena Center for the Arts, San Francisco, CA; and Hales Gallery, London. He has been included in group exhibitions at the New Museum of Contemporary Art, New York, NY; the ICA Boston, Boston, MA; Aldrich Museum of Art, Ridgefield, CT; DOCUMENTA, Kassel; and Akademie der Künste and Kunst-Werke, Berlin; among others. “The Memorial Dress” was recently exhibited at The Hayward Gallery in the acclaimed exhibition “Kiss My Genders”. In 2017, Reynolds was awarded a Guggenheim Fellowship.

This is Reynolds’ third solo exhibition with P·P·O·W.