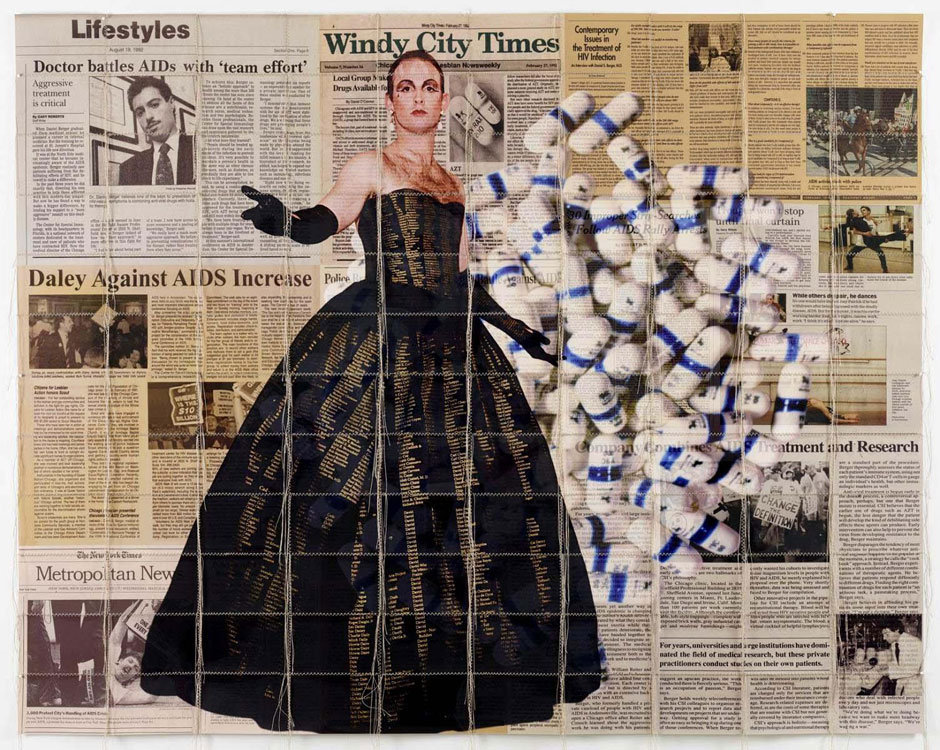 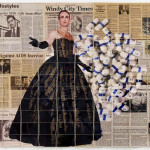 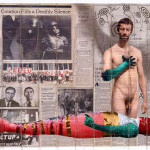 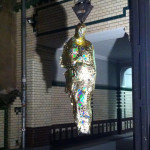 P·P·O·W is pleased to present an exhibition of new work by Hunter Reynolds. For over twenty five years Reynolds has been using photography, performance and installation to express his experience as an HIV positive gay man living in the age of AIDS. He was an early member of ACT UP, and in 1989 co-founded Art Positive, an affinity group of ACT-UP to fight homophobia and censorship in the arts. His work addresses issues of gender, identity, socio-politics, sexual histories, mourning, loss, survival, hope and healing. The exhibition at P.P.O.W will feature large-scale photo weavings, a new video work and a “Mummification” skin that together reflect Reynolds’ vision of himself, his community, and his role as a long-term AIDS survivor.

The central focus of the exhibition will be “Survival AIDS 2”, a series of photo weavings comprised from c-print grid-collages of scanned newspaper clippings that Reynolds began collecting between 1989 and 1993. The clippings are grouped by formal and thematic connections with additional layered images that reference Reynolds’ modes of artistic practice; spots of his HIV-positive blood; portraits of Patina Du Prey, his gender-fluid alter ego that spun through the streets of Germany, New York and California; and images of his “Mummification” performances in which he is wrapped in cellophane and tape that forms a skin which is displayed after he emerges. Through his layering of media, Reynolds has abstracted messages and infused his own images to create a space within the work where artist and audience, present and past, exist simultaneously. While his earlier works in the “Survival AIDS” series sought to preserve a particular moment in history, this collection turns inwards, using historical, politically charged documents to recreate a visual retelling of his own personal narrative.

Also on view will be “Medication Reminder”, a new video work that Reynolds created from the recordings of a dear friend, who for a year and a half called Reynolds every day to remind him to take his HIV medication. Following his HIV strokes, Reynolds was forced to take a strict regimen of pills twice daily, which he was loath to do. As her messages accumulated, Reynolds documented himself listening to the reminders, sorting his pills, and taking his medicine, overlaid with audio clips of Reynolds talking to his friend as if she were there with him, completing the voice mail conversations. Throughout the video we hear the sound of her voice of friendship interspersed with a rhythmic phrase: “Take your meds, I love you, take your meds, I love you, bye.”

The body – expressed through his “Mummification” performances, and the skins that he sheds as a result, are a symbol of transformation. They are on view and depicted in the photo weavings, as symbols of the artist reclaiming his diseased body – taken together with “Medication Reminder”, the works in this exhibition tell Reynolds’ own personal mythology, as well as that of his community and those he loved.

Reynolds will be having a concurrent exhibition and performance at EXPO Chicago (Sept 14 – 20) featuring a monumental photo-mural, composed of clippings scanned from the archives of Act Up Chicago and Dr. Daniel Berger, a Chicago doctor known for his cutting-edge work with HIV and AIDS patients.

Catalog available for purchase with an interview by Jason Foumberg.