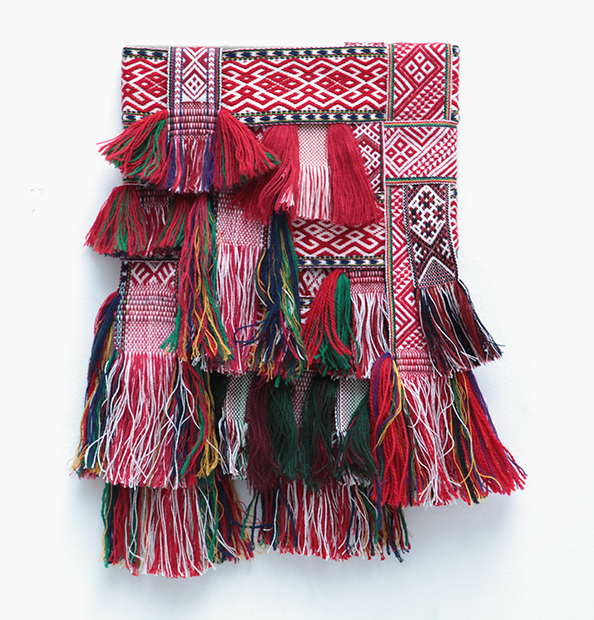 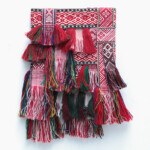 Parafin is pleased to announce an exhibition of new work by Lithuanian artist Indrė Šerpytytė, her second at the gallery. This exhibition coincides with ‘When the Golden Sun Sinks’, a solo display of newly commissioned works at Rugby Art Gallery and Museum. At Parafin, Šerpytytė will show a series of new textile works for the first time in London.

At the core of Šerpytytė’s practice lies an interest in conflict and its accompanying trauma. Working across photography, sculpture and mixed media, much of her previous work centres on the recent history of Lithuania, how it is recalled and its influence on national identity. However, these new works step away from such specificity, instead exploring the use of culturally charged symbols as an abstract language: a form of communication that traces a universal discourse.

In the series ‘From.Between.To’, Šerpytytė employs ceremonial sashes specific to the Baltic region, overlapping and layering them across canvas stretchers. Using traditional materials, these works trace how the region’s communities intersect; motifs from one country are legible in another and reveal a call and response between nations that share a narrative of conflict. She also looks at how the repetition – or rhythm – of these patterns might be understood as a wider visual language, one that can communicate between cultures or regions familiar with war. Just as linguistic forms of expression facilitate a communal purpose, so visual matter can be incorporated into a process of mutual understanding.

Away from the Baltic context the works also address a different history, that of international Modernism and in particular the development of abstraction and the concept of the Readymade. By weaving the sashes into complex grids on canvas stretchers Šerpytytė recalls the tropes of geometric abstraction. By using them unaltered, as Readymades, she both celebrates and deconstructs their historic meaning. Having initially begun the series working with traditional colour schemes – typically, reds, yellows, black and white – she now also collaborates with the weavers to produce the sashes in vibrant colours that recall the chromatic intensity of Pop and Op art, furthering the layered referentiality of the works.

Works from the series ‘From.Between.To’ are included in the major new Phaidon book “Vitamin T”, published in April.

Indrė Šerpytytė was born in Lithuania in 1983. She studied at the University of Brighton and the Royal College of Art, London. Šerpytytė’s work has been exhibited internationally. Recent solo exhibitions include CAC, Vilnius (2017); Parafin, London (2016); Still House Group, New York (2016); the Museum of Contemporary Art, Krakow (2015); Ffotogallery, Cardiff (2013); and the Photographers Association, London (2011).