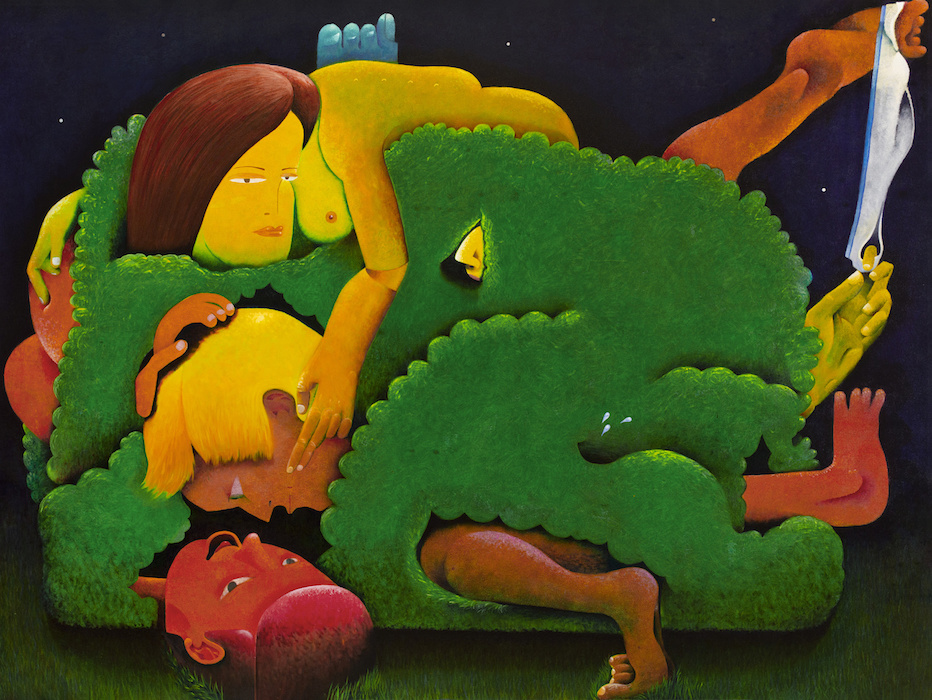 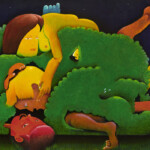 Interested in correct versus incorrect binaries, with regards to both visual composition and subject matter, Mann toys with convention in his paintings, creating chaotic and surreal scenes of intertwined figures engaged in kooky and kinky behavior. Motives and identities are masked or as of yet not ascertained, and the zanily orchestrated scenes, pulled from memory and fantasy – though are the two altogether that different? – read with an immediacy that demands a second pass, as details peep out with a little uncovering.

The underpinnings of the paintings are developed from Mann’s extensive drawing practice, where compositional elements are reworked and collaged in an effort to create the most intriguing and beguiling arrangements of shapes. In the translation to canvas however, the ultimate outcome remains uncertain, as Mann’s reductive method of painting – the building up and striping away of layers that incorporates techniques meant to heighten color transparency and interplay – is constantly in flux, as new optical relationships between painterly parts emerge and evolve over the course of the work’s completion.

Touch is at the forefront of these works, as haptic happenings remain open to interpretation; an acknowledgement of how thin the line is between a sensual caress and a failed attempt at communicating. Mann forces the viewer’s hand, challenging them to decide the context of the characters for themselves. “Slap Slap Kiss, 2019,” for instance, while populated with specific visual details from the artist’s life, ultimately serves as a misremembering, an acknowledgement of the uncertainty inherent within even our most assured of memories.

This recent body of work emphasizes presenting a singular, calculated perspective of the unfolding events in each painting. Recognizing the fallibility of his own transmissions, and the myriad ways the intentionally ambiguous happenings could be interpreted, Mann embraces his own limitations and uses them as flawed foundational building blocks on which to construct compositions that, while increasingly absurd, are undeniably his own. The known and the unknown exist in the same plane, as small details like an emergent limb or an askance glance act as incomplete evidence on which the viewer is asked to create their own interpretation of the presented scene.

This exhibition is dedicated to the memory of Frances Myers.