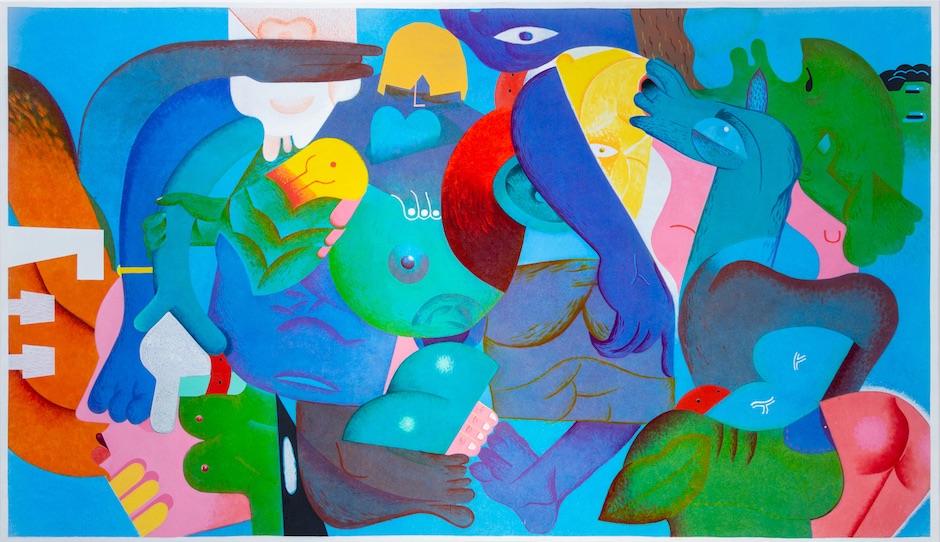 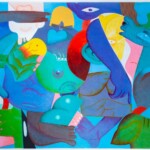 Thierry Goldberg is pleased to present “Lather”, an exhibition of new works by Isaac Mann.

Isaac Mann’s paintings are studies of color and the human figure that are as much about dynamic shapes as they are about intimate relationships. Accordingly, through the works in the exhibition Mann dissects how a shade of color changes under water, or how a body part reacts to a gentle touch. Traveling the line between play, eroticism, and romance, he places figures in moments of intimacy that range from tender to overwhelmingly suggestive. It is in these depictions that Mann creates worlds of fantasy, which escape dull every-day life to days filled with ecstasy.

Quintessential of this escapist romance is Mann’s “Lather” series of couples lounging in bathtubs where their naked bodies swarm around each other caught in acts of love, temptation, and lust. The figures are pressed up against each other and the sides of the tub, intertwining their bodies in fleshy knots. Sections of the figures bob above the water, bursting out of the tub in neon hues that resemble kids’ pool noodles. Other body parts are submerged in the almost opaque water, turning shades of blue and green as they morph into flattened depictions. Under water, the bodies are abstracted, the logic of the human figure and of color is lost, and instead the thrill of a body part is revealed. These aquatic explorations and twister-like games are infused with joy as they burst with passion and movement.

Accompanying Mann’s tongue and cheek bathtub tête-à-têtes, is “Veronica” (2021), the artist’s massive painting of an array of body parts and limbs, layered to create an ode to a physical act of passion. In his most abstracted work in the exhibition, Mann does not depict an act, but instead simulates a cacophony of feelings, flashbacks, and sensations.

Seemingly opposed to these exuberant acts of love, are Mann’s more solitary paintings, which though less climactic provide a more quotidian view on relationships – or the lack of them. In many of these vignettes, there are glimpses celebrating the charming beauty in ordinary play. While in others, like in Mann’s frying pan series, there is a solemn loneliness felt by the lack of play. In these works figures clutch black and indigo iron skillets, rendering them as objects of affection, or stand-ins for partners.

Mann’s scenes of closeness and allure reveal the luxurious potential of seizing moments of intimacy. They capture the rarity of these moments of connection, and the euphoria felt when they happen to occur.

Gallery hours Wed-Sun 10 am – 6 pm
Walk-ins are welcome, up to 6 visitors in the space at a time.