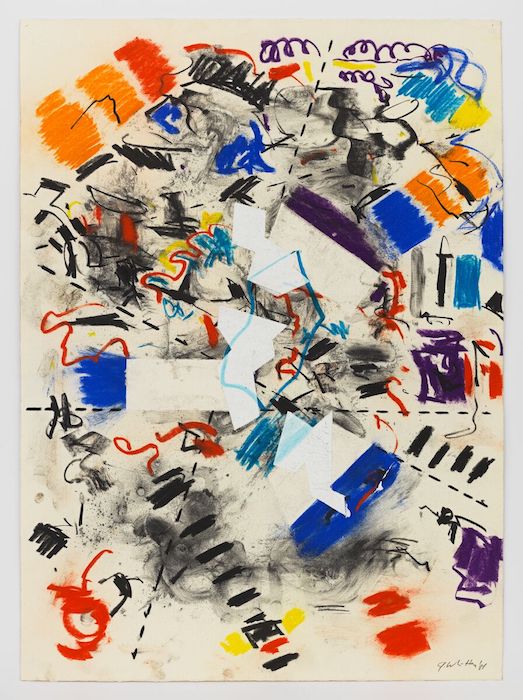 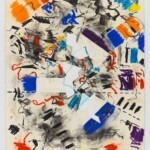 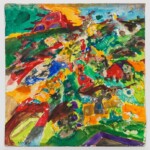 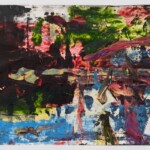 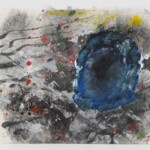 Hauser & Wirth is pleased to present the first major survey of Jack Whitten’s works on paper, spanning the artist’s six decade career. Jack Whitten (1939 – 2018) made it his mission to disrupt the discipline of art history through experiments with material, process, and technique. He effectively constructed a bridge between gestural abstraction and process art, constantly working toward a nuanced language of painting that employs deeply personal expression. Whitten was also a prolific and powerful draughtsman. The unique body of works on view at Hauser & Wirth testifies to the immensity of his commitment to drawing as a means to make manifest his ideas and advance his methods.

‘Jack Whitten. Transitional Space. A Drawing Survey.’ spotlights the artist’s playfulness and improvisational skill in searching for his own special visual language. Paper was more than an effective medium for Whitten; for him, working on paper was akin to scientific research. With an aesthetic hypothesis in mind, he worked tirelessly on paper to both subvert and elevate the history of art and how best to represent the many layers of information packed inside his imagination.

Drawing was an integral part of Whitten’s artistic and technical maturation. His analysis of the properties of different mediums engaged materials as diverse as watercolor, toner, cuttlefish ink, homemade walnut ink, and endless variety of Japanese and specialty papers. The trial-and-error of Whitten’s methodology can be felt through the multiple versions and renditions he created of particular works, many of which served as preliminary studies for subsequent paintings and monumental series.

‘Jack Whitten. Transitional Space. A Drawing Survey.’ showcases the evolution of Whitten’s drawing process by exploring a range of styles, techniques, and use of varied materials from the 1960s to the late 2010s. The many phases of his practice – which he described as ‘conceptual’ – are united by a passion for technical exploration and a mastery of abstraction’s potential to map geographic, social, spiritual, and psychological locations, often within the African American experience. ‘Drawing is an act of brave exploration into unknown territories,’ Whitten said in his seminal 1993 essay, ‘Working on Paper.’ ‘I investigate everything and anything through the act of drawing.’

Organized chronologically, ‘Transitional Space’ begins with works from the 1960s, a period of self-analysis for Whitten. Drawing from such sources of inspiration as the late Surrealism of Arshile Gorky and the abstraction of Willem de Kooning, as well as his studies of African sculpture, Whitten was driven by an interest in the current political climate of the 1960s and a search for identity. At a time in New York when abstract expressionism was the dominant vocabulary, Whitten worked to find a way through and beyond those notions, and worked to develop his own point of view through this lens. The exhibition features works from 1964 that bring attention to the artist’s early gestural practice. In the group of portraits, which includes ‘Ruby’ (1964) and ‘Viola’ (1964), Whitten depicts African American women which at the time, was a radical subject for art. The “Forms” series are early experiments with processes and relate to his later “Ghost” paintings. Grappling with recent events of that time, the “King’s Garden” series is dedicated to the revered civil rights activist Martin Luther King, Jr. These landscape-based works, still quasi-representational and clearly related to issues of race, comprise a harbinger of the direction Whitten’s practice would take. Toward the end of the Sixties, Whitten began the “Transitional Space” series, shifting from naturalistic representation into the pure abstraction that would characterize his work in the 1970s.

In the 1970s, Whitten experimented with mechanical automation, moving away from gestural mark-making. He relied heavily upon the capacities of non-traditional tools for drawing and painting, finding inspiration in the Xerox machine’s electrostatic printing technology, which allowed him to update his visual vocabulary and manipulate planes and spaces. Whitten began moving toward collage at this time, building compositions with pieces of dried acrylic paint, which he thought of as ‘skins.’ Employing muted monochromatic shades of red, brown, and grey in works like ‘Broken Plane #4’ (1972), and bright colors in ‘Untitled’ (1973), Whitten again expanded his visual language. Later, in 1980s, Whitten would expand on this practice, renaming these paint ‘skins’ as ‘tesserae,’ referring to ancient Greek and Roman mosaic tile.

By the 1980s, Whitten’s predilection for the cosmic and quantum guided his focus further toward advanced science and technology and its relationship to spirituality. For Whitten, syntax – the ability to make sense of opposing systems of thought – was crucial. In ‘Geometric Collusion #1’ (1981), Whitten employs these ideals within the permanent nature of his mediums of acrylic and charcoal, and in the experimental, intentional strokes that work to evaluate notions of control. His artistic production functioned as a bridge between spirit and matter.

In the 1990s, Whitten further honed his singular talent for transfiguring materials beyond their original intended uses. Experimenting with Sumi ink in the “Presence” series, and metal filings in the “Assassin” series, he constructed, deconstructed, and reconfigured forms. In the 2000s, Whitten combined wax or glitter with powdered pigment and acrylic to arrive at new expressive hybrids, as seen in such works as ‘Space Flower #9’ (2006).

‘Transitional Space’ concludes with a group of works from the 2010s, a time when Whitten confronted the past. Perceiving the body as a transmitter of cosmic data, he illuminated the relationship between space and time, and their engagements with the human brain. ‘Study for Atopolis E’ (2014) presents the viewer with a dark universe in which light is built from tiny pieces of matter – chaos depicted through intense accumulation, overwhelming with its frenetic power and yet meaningful through the artist’s determined and skillful arrangement of his transformed materials.

Born in Bessemer, Alabama, in 1939, Whitten was an active participant in the Civil Rights Movement before moving north to New York City in the early 1960s and enrolling in Cooper Union. He mingled downtown with the Abstract Expressionists, absorbing the influence of Willem de Kooning, Mark Rothko, Franz Klein, and Philip Guston, while engaging uptown with Norman Lewis and Romare Bearden. But Whitten would soon prioritize his own distinctly experimental vision, engineering breakthrough after breakthrough with techniques and materials, articulating new pathways between artworks and their inspirations. At times he has pursued quickly applied gestural techniques akin to photography or printmaking. At other times, the deliberative and constructive hand is evident. From his series of small “Ghost” canvases of the 1960s and subsequent pulled Slabs and dragged canvases of the 1970s, Whitten moved on to collaged acrylic Skins of the 1980s, and eventually to his more recent tessellated constructions – paintings that look like mosaics but are actually composed of dried-acrylic paint chips as tesserae unevenly set into acrylic medium.