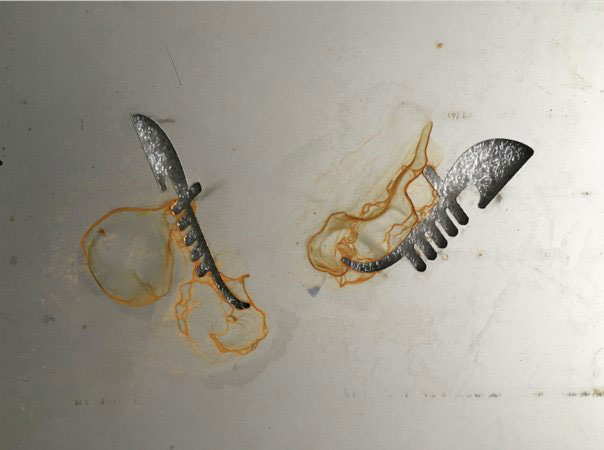 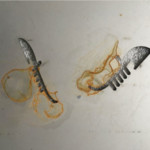 Team (bungalow) is pleased to announce a show by Jacob Kassay, entitled “Alarmer 2”. For the duration of the show, the artist has diverted the gallery’s staff, who will be working out of Team’s nearby satellite space, located at 310 Venice Way.

Titled after a previous exhibition at Team (Bungalow) – Chadwick Rantanen’s “Alarmer” – this show takes the domestic space and its suburban Venice Beach locale as both subject and medium; the artist enacting several interventions in order to endow it with the aggressive appearance of a vacant home. Steel security screens, designed to keep out intruders, cover the front and back windows and doors. The sides of the house are enclosed by sheets of Lexan, a brand of transparent polycarbonate. The space’s interior – visible only through the window – is empty except for the hardware necessary to hang the security applications; the accouterment of domesticity has all been removed. By restricting access to the home in this manner, Kassay implies the mysterious existence of a custodial figure or corporation, an invisible force that maintains the unused property.

Venice has undergone a radical socioeconomic shift over the past decade. Shedding its reputation for hippies, gangs and drugs, the neighborhood is now perceived as an idyllic suburban enclave. The neighborhood bungalows, built originally as middle class vacation homes, were later occupied by roughneck families in the time of Venice’s brief oil boom, and then by various disenfranchised and bohemian groups during its “Ghetto by the Sea” phase. As of late, these modest homes have become some of Los Angeles’ most expensive real estate. The presence of an established New York gallery is a recent signifier of the locale’s gentrification, potently symbolizing the replacement of artists’ studios with sites of commerce.

Kassay’s installation re-contextualizes the bungalow within this costly locale by foregrounding the speculative reasoning behind the practice of protecting empty homes: guarding an investment by preventing residence. This nullification of occupiable space – which takes place during the area’s peak vacation months – draws attention to the history of Venice Beach, and the nature of property ownership itself. By forcefully annulling the gallery’s commercial functionality, as well as disrupting its seamless existence on a residential street, the artist sounds an alarm for the often-unfelt effects of economic development on a neighborhood.

The 32-year-old Jacob Kassay is currently the subject of a one-man exhibition at The Albright-Knox Gallery in Buffalo, NY. Past solo presentations have been held at The Kitchen, New York; The Power Station, Dallas; and Collezione Maramotti, Reggio Emilia. He has been included in group shows at venues including MoMA PS1, New York; Fondation Richard, Paris; Centre National d’Art Contemporain, Grenoble; FRAC Poitou-Charenetes, Angoulême; and Kunsthalle Andratx, Mallorca. Kassay’s work was part of the 8th Gwangju Biennale, curated by Massimiliano Gioni; and the 2010 White Columns Annual, curated by Bob Nickas. Kassay lives and works in Los Angeles.