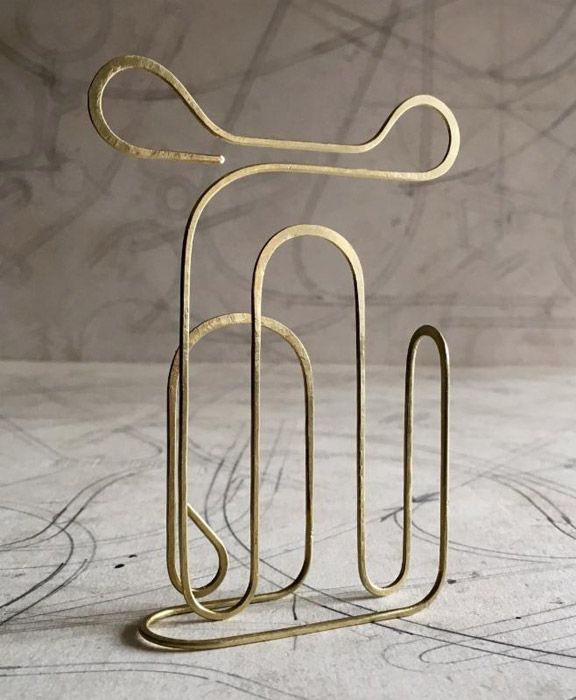 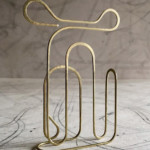 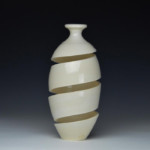 “Stroke of Genius” brings together three disparate artists working in three different mediums that evidences the shared spirit of repetition and reduction, creating beauty from one single mark.

As a curator, “Stroke of Genius” is one of those shows that percolates for a long time, then in a matter of moments falls together. The exhibition evolved from wanting to highlight the black monochrome paintings of James Austin Murray. Murray is a non-objective abstract painter whose methodology is the culmination of muscle-memory and that exact moment when intuition and practice intersect. The marrow of Murray’s work is the way the absolute-black lines capture and interpret the light and surrounding colors reflecting off its surface. There is a palpable sense of assuredness in the marks Murray makes which can only be defined by practice, maturation, intuition with a little dash of magic.

Then arose the question, “How can I highlight this single stroke of genius?” Enter ceramist Michael Boroniec. I have been following Michael’s work for quite some time finding his deconstructed vases very engaging, especially the single ribbon-like forms. Boroniec writes, “What began with teapots and a single spiral has evolved into a series of vases that vary in form, degree of expansion, and number of coils. Each vessel is wheel thrown then deconstructed. This process reveals aspects of the vase that most rarely encounter. Within the walls, maker’s marks become evident and contribute to the texture. The resultant ribbon effect, reminiscent of a wheel trimming, lends fragility, elegance, and motion to a medium generally perceived as hard and heavy. This emphasizes a resistance of gravity, allowing negative space to unravel and become part of the form. The result is a body of sculptural objects, resembling and born of functional vessels.” Pairing Boroniec with Murray just fell into place visually.

Similarly, I follow the sculpture of Rodger Stevens. Stevens was part of a group show, “Unlimited Potential,” curated by James Austin Murray at Lyons Wier Gallery. Stevens installed a wonderful ceiling mounted mobile titled “Resurrection Machine”. It was a multi-piece installation of delicately bended steel that certainly nodded to the mobiles and stabiles of Alexander Calder but with a paired down contemporary feel. As my plans were coming together for Murray and Boroniec, Rodger posted an image of his brass sculpture. This was a curatorial gift! Alongside his suspended installation work is his collection of pedestal and wall driven sculpture that is often hammered out of a single piece of brass. Here too, Stevens’ work reflects the desire to create an artistic mark in one simple gesture. His work is certainly reminiscent of the past, yet is clearly concerned with contemporary thoughts of art and design.

Michael Boroniec is a sculptor and designer who resides and creates in Berkshire County, MA. Graduating from the Rhode Island School of Design (2006), Boroniec has shown in numerous museums and galleries throughout the United States including The Berkshire Museum, Berkshire County, MA, Albany Institute of History and Art, Albany, NY, Nicolyasen Museum of Art and Discovery, Casper, WY, Fuller Craft Museum, Brockton, MA, Boise Museum of Art, Boise ID, Lichtenstein Art Center, Pittsfield MA. Intrigued by creating art at a young age, Boroniec took to ceramics as a means of communication expressing that earth is of the oldest material known to man. His sculptures link the historical implications of clay with contemporary fine art.