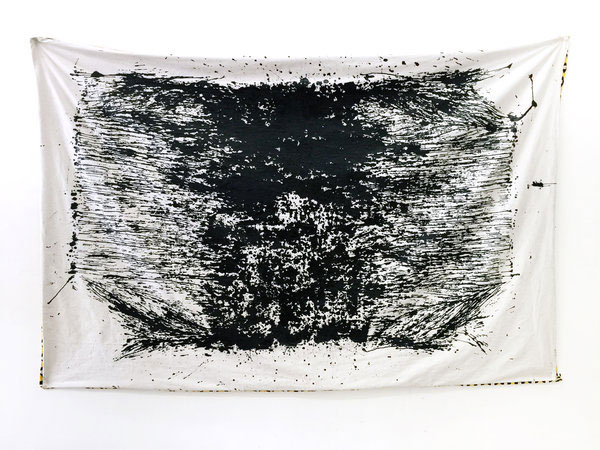 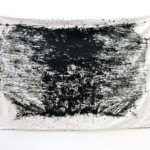 Team (bungalow) are pleased to announce a show of new work by Los Angeles-based artist James Crosby, entitled “Forms Between”.

In “Forms Between”, James Crosby confronts a long-established history, in art and elsewhere, of black and brown bodies bearing the sole burden of race and race-related subject matter. Instead, Crosby’s work explores how race and racial meaning-making happen between us, not in or on any given set of people or bodies. Racial meanings form between bodies and between people, and they form not only in moments of hyper-publicized black death, but also in the most mundane moments, gestures, and histories. Like Saidiya Hartman’s resolution to “… consider those scenes where terror can barely be discerned,” Crosby’s work explores the everyday materialities of structural violence and personal possibility.

The pieces that comprise “Forms Between” – filters, hoodies, masks, and quilts – exist between our bodies, others, and the world, inhabiting those spaces where racial meaning is made. Crosby uses materials and processes to explore that space, as in “Abstraction”, a large sculptural work where several hoodies are sutured together and stitched shut, then filled with rapid-expanding foam. Crosby selected this construction material, normally used for sealing gaps in structures, to create a form outside his control as both an artist and a black male. The form materializes the ways racial meaning-making is out of our control. We might think of perceptions of blackness through the gaze of whiteness, as in the testimony given by Darren Wilson, the officer who murdered Michael Brown in Ferguson. The piece conjures a violent way of seeing that mutates the hoodie vessel into a monstrous abstraction, but then also destabilizes that violence. Responding to Fred Moten’s assertion that, “the history of Blackness is testament to the fact that objects can and do resist,” Abstraction is also oddly beautiful – geode-like, heart-shaped.

Crosby’s artistic strategy of inhabiting another’s gaze originates in his ongoing project of reproducing the protective respiratory hoods designed by African-American inventor Garret Morgan, who is also known for creating assimilation products designed to erase physical signifiers of blackness. Reassessing Morgan’s apparently contradictory creations – those that serve the public interest and those that commodify racism – through the lens of his personhood, Crosby reframes these paradoxical inventions as uneasy technologies of survival, instruments of both erasure and protection of black individuality.

Throughout “Forms Between”, common construction materials and craft techniques carry conceptual significance, particularly the tar-like substance central to the show, a vulcanized rubber medium of the artist’s own creation. The haptic blackness of the medium yields metaphor and meaning; the medium is not only color but also structure and a series of existential properties: Crosby builds with it, experimenting with its pliability and strength.

For a series of studies titled “Filters”, the medium acts as a malleable exoskeleton that allows the dense weavings to be removed from their generative structure, in the process deforming them. Emblematic of the construction of racial and cultural identity, Crosby uses materiality and form to establish a disconcerting tension between the personal and structural, with a bodily element at times overwhelming the rigid splint of structure.

In “View From the Couch”, Crosby foregrounds his dedication to textile processes of quilting, sewing, and weaving, referencing Gee’s Bend quilts made from fabric scraps whose original utility had faded. Crosby’s quilt top was the drop cloth used in the making of the “Filter” pieces, the collected drips and splatters composing a Rorschach-like blot that reifies the studio environment and asks us again, what do we see when we see black? The backing fabric is a Dutch wax print, originally made by colonial producers using mass production methods to replicate Indonesian Batik prints that were then adapted for a West African market that has made them their own. This syncretic textile provides a material and conceptual structural backing, overlapping economic, cultural, and artistic meanings to retrace a complex and transformative history.

James Crosby was born in 1974 in Peekskill, NY and lives and works in Los Angeles, CA. Crosby followed his graduation from UCLA’s MFA program in May 2016 with a highly-acclaimed New York solo debut later the same year. This is his second solo exhibition with Team.